The bookselling community is mourning the loss of Nancy Olson, founder and former owner of Quail Ridge Books & Music in Raleigh, North Carolina, who died on Sunday, March 27, at the age of 75 of kidney disease. 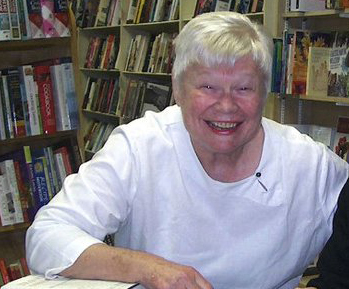 In a memorial tribute posted on the store’s website on Sunday, store manager and longtime friend Sarah Goddin said, “[Nancy’s] love for literature and music, combined with her warm and expansive personality, inspired and influenced a literary Renaissance in the Raleigh community and was felt well beyond it.”

A Virginia native, Olson moved to Raleigh with her husband, Jim, in 1981. In 1984, she opened Books at Quail Corners, which would later become Quail Ridge Books & Music. During the 29 years Olson owned Quail Ridge, she befriended and championed many North Carolina authors, including Charles Frazier (Cold Mountain) and Jill McCorkle (Life After Life). In 2001, Publishers Weekly named Olson and Quail Ridge its “Bookseller of the Year.”

A vibrant and engaging presence who loved to interact with customers, Olson also pursued causes beyond Quail Ridge’s walls. She became a champion of the Raleigh Shop Local movement and served on the North Carolina State Library Board. Olson also helped raise money for libraries and started Books for Kids, a nonprofit foundation that gives books to children in need.

In 2013, Olson retired from bookselling and sold the business to Lisa Poole, who will be moving the store from Raleigh’s Ridgewood Shopping Center to the North Hills Shopping Center later this spring.

Of her predecessor, Poole said, “All of us are heartbroken by the death of Nancy. She was, and will always be, an inspiration to me and, I believe, anyone who was fortunate enough to work with her. She was a charming lady with a love for people and great literature, especially North Carolina authors. She turned her bookstore, her baby, over to a novice, and I’m determined to maintain the standards of bookselling and hospitality that made Nancy who she was. I think everyone will agree that she was an icon.”

American Booksellers Association CEO Oren Teicher said, “All of us at ABA were deeply saddened to learn of Nancy’s passing. Her energy, enthusiasm, and extraordinary knowledge about books and bookselling were always inspiring. She was a passionate believer in the Shop Local movement, and she played an important role in shaping that influential movement in Raleigh.”

Recalling the 2013 holiday season, when he volunteered for several days at Quail Ridge, Teicher said, “Though it was after Nancy had had sold the store, I fondly remember how she would show-up to hand-sell her holiday favorites to her many loyal customers. Nancy just couldn’t stop talking about books.

“I was also honored to have been invited to Quail Ridge’s 30th anniversary celebration a few years ago, and, it was a special treat to hear writers Charles Frazier, Jill McCorkle, Lee Smith, Allan Garganus, Margaret Maron, Clyde Edgerton, Angela Davis-Gardner, and Randall Keenan describe the role Nancy played in creating audiences for their books.

“Nancy will be greatly missed, and her legacy in bookselling will be long lived.”

Southern Independent Booksellers Alliance Executive Director Wanda Jewell remembered Olson as a “delightful and smart, talented and thoughtful” person who always had a joke or story, a travel tale or a store encounter that would ensure a chuckle.

Goddin, who became friends with Olson 30 years ago, at a time when she was opening her own bookstore, Wellington’s, said the two of them had gotten together on a weekly basis to talk books and business; collaborated on a book review column; and traveled to book conferences in Phoenix, San Francisco, and even China. Their two stores shared employees from time to time, said Goddin, and after Wellington’s closed, Olson hired her to work at Quail Ridge.

Olson made Quail Ridge into a landmark bookstore that transformed the city of Raleigh into a notable literary community, Goddin said, adding that Nancy’s focus as a bookseller was always to create connections between authors and readers.

“Nancy had a very small store at first but she never acted like she had a small store,” said Goddin. “She always went after the bigger, more well-known authors and worked hard to bring them to the store. She was many authors’ literary champion, and would go to bat for them in many ways. She was instrumental in getting some of these new authors, like Ron Rash, together with literary agents that she knew to help them reach a wider audience.”

“Nancy was also just a complete people person,” Goddin added. “Since I sent out the notice to our customers on Sunday afternoon, we’ve gotten about 150 e-mails from people expressing their condolences and relating anecdotes about her.”

A March 27 tribute to Olson in Raleigh’s News Observer newspaper also quoted several former Quail Ridge staff members, including Carol Moyer, on what Olson meant to them and the bookselling world.

“[Quail Ridge] wasn’t a cookie-cutter store; you could tell individual thought had been put into the collection and design of the store,” Moyer said. “(Olson) was a dream to work with. She was always open to ideas and loved children’s literature…She was devoted to our First Amendment rights, which is why she carried a wide range of books, so everyone could find something that suited them or broadened their horizons.”

Olson is survived by her husband, Jim; sons Corey Raines of Raleigh and David Raines of Poughkeepsie, New York; and stepchildren Heidi Sloan and Eric Olson of Raleigh, Terrilynn Olson of Denver, and Douglas Olson of San Jose, California.

A memorial service for Olson will be held on Thursday, April 7, at 11:00 a.m., at the Unitarian Universalist Fellowship of Raleigh, at 3313 Wade Avenue.