As a part of Bookshop Santa Cruz’s year-long Women’s Voices promotional book event created this January in response to the #MeToo movement, the Santa Cruz, California, store dedicated the month of July to highlighting women in the workplace, with a specific focus on the unique leadership and community-building strength of women business owners. 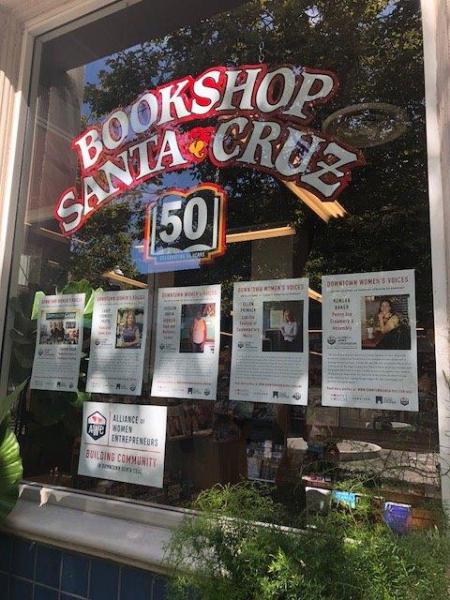 To celebrate this theme, Bookshop Santa Cruz paired up with the Santa Cruz Downtown Association and the City of Santa Cruz’s Economic Development Office to help launch a new local downtown group, The Alliance of Women Entrepreneurs (AWE) made up of nearly 40 downtown businesses and organizations owned or managed by women.

As part of the campaign, the store hired a photographer to interview female business owners, which the marketing team used to create “Downtown Women’s Voices” posters; participating AWE businesses hung these in their windows, making for a visible presence downtown. Each of the businesses also shared these profiles of women owners on their social media platforms all month long to create online engagement.

The idea for AWE originated last year, when local retail store owner Andi Heinrich created an informal network of women she knew who also owned businesses in downtown Santa Cruz. The group evolved from weekly Wednesday morning gatherings at a local restaurant to a wider network of friends of friends, then to the public launch of a formal organization.

“The group’s mission is to shine a light on the number of downtown businesses in Santa Cruz that are owned or managed by women and to create opportunities for those businesses to share best practices with each other while also promoting to customers the ways that these businesses are fostering a strong sense of community downtown,” said Bookshop Santa Cruz owner Casey Coonerty Protti.

The partnership with the bookstore stemmed from Bookshop Santa Cruz’s year-long Women’s Voices event, which the store created to elevate the voices of women writers, to further the dialogue around issues facing women today, and to create a community conversation about equality in Santa Cruz through book selections, author events, reading challenges, children’s programming, and community building events. Every month, the store chooses a topic important to the lives of women and then chooses one book, written by a female-identifying author, to promote and to build an entire month of programming around.

For July, Bookshop Santa Cruz selected the topic of “Women & Entrepreneurship” and Grace Bonney’s Good Company: Where Creativity Meets Business, the first issue of the new biannual magazine from Fast Company, which profiles creatives and entrepreneurs who are either women or from another marginalized group. Bonney is also the author of In the Company of Women: Inspiration and Advice From Over 100 Makers, Artists, and Entrepreneurs (Artisan). 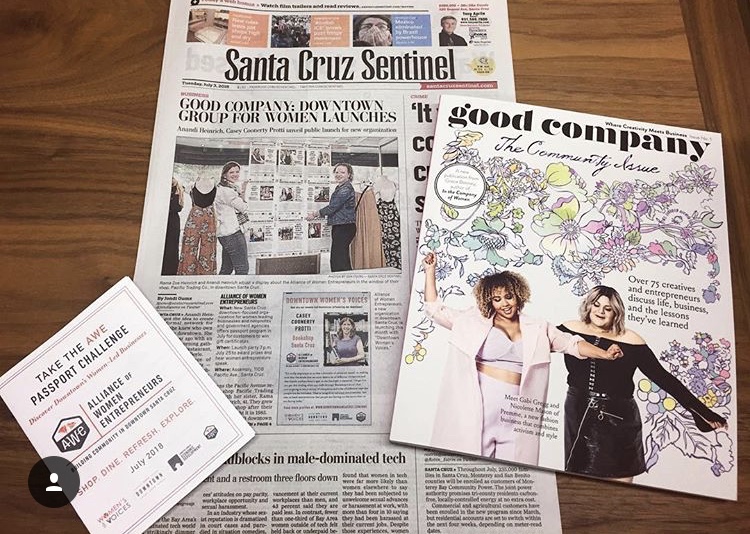 Bookshop Santa Cruz created materials to help launch the new Alliance of Women Entrepreneurs, including a passport challenge based on the Find Waldo Local program.

As part of the month’s programming, the store began work on helping to launch AWE in part by creating programs to drive customers to participating businesses, including the AWE Passport Challenge, which was designed by store marketing director Stefanie Berntson based on the Find Waldo Local passport. The program challenged customers to visit 10 of 25 participating AWE businesses downtown in July to win gift certificates to those businesses; passports were made available at Bookshop Santa Cruz or any of the participating AWE members. Then, on July 25, the store held a launch event for AWE attended by more than 120 people. Through these efforts, the store sold 26 copies of Good Company and 11 copies of In the Company of Women.

“Casey’s initiative is a great example of how a bookstore can respond in the #MeToo era in a focused and actionable way,” said ABA Education Manager Lisa Winn. “This initiative of hers includes not just book groups and book sales, but effects change by doing the work where it matters — her community. At the same time, it highlights the downtown indie retail scene and elevates women business owners and so the local economy.”

In a recent conversation with Bookselling This Week, Protti shared advice she would give booksellers who are also interested in creating programming that takes on women’s issues.

“Except for very specific issues like the #MeToo movement,” she said, “a lot of times what we really tried to focus on was a sense of empowerment. It wasn’t us versus them or rehashing these really big political issues in a divisive way, it was much more focused on how we can feel empowered. How can we use our voices? How can women’s voices have power in this world? I think when you focus on empowerment, that goes a long way to making it feel accessible and inclusive for folks.”

At the same time, she added, Bookshop Santa Cruz is not accustomed to avoiding issues that are controversial but add to the dialogue.

“We’ve always been a store that takes stands on political issues, and I know a lot of stores don’t and I respect them for making that decision,” said Protti. “But we’re much more likely to be involved in the political world; we’re more comfortable with it. There is anger there and there are some intense things to read about in these issues and we should not shy away from that. Our #MeToo month is coming up in September, so we will probably address some of these issues straight on.” 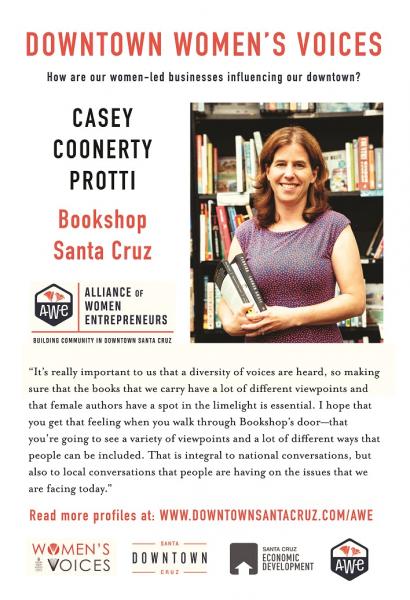 Since they teamed up to help launch AWE, Protti said the response from the participating businesses and community has been overwhelming, and has included media coverage, co-sponsorship by the local NPR station (KAZU), and plans for future women-led initiatives to highlight the impact of women-owned businesses. For booksellers who are interested in doing similar downtown-focused projects with passports, posters, and monthly book selections, Protti said bookstores should involve their staff as much as they can.

“Our staff have a lot of feelings about these issues; they have read a lot of books that are meaningful to them and they share a sense of empowerment about being able to share those books that are important to them,” said Protti. “Bring your staff into the fold; then, when they are engaging with customers on these topics, it feels like a genuine conversation because it’s not just you making the decision — it’s really from the place of people wanting to talk to each other about these issues. Involving your staff is a key component to making it work.”