This week, bookstores around the country welcomed the release of Turtles All the Way Down (Penguin Books), the first book from author John Green since his bestselling and award-winning novel The Fault in Our Stars published five years ago. 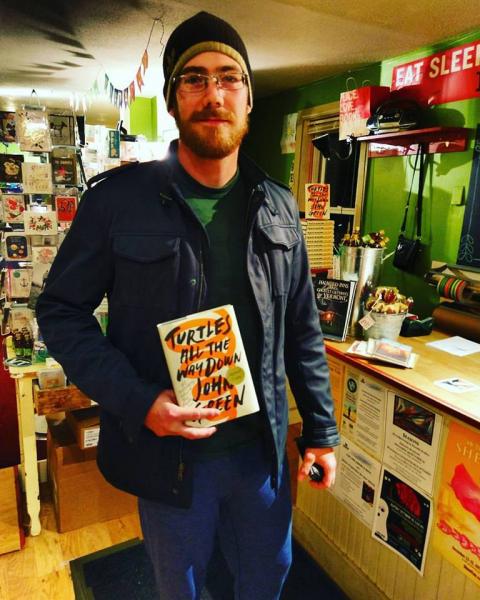 The first customer to pick up a copy of “Turtles All the Way Down” at Bridgeside Books in Waterbury, Vermont.

Green, author of bestselling YA books such as Looking for Alaska and Paper Towns, among others, has become an icon of the genre, in part through his connection with fans on social media. Turtles, like Green’s other books, takes on the subject of mental illness, and is perhaps the story most closely based on his own struggles with anxiety and obsessive compulsive disorder. The novel tells the story of 16-year-old Aza and her best friend, Daisy, as they take on the mystery of a reclusive billionaire and Aza battles her anxiety demons.

Since Turtles was strictly embargoed until midnight on Tuesday, October 10, bookstores around the country held midnight release parties to appeal to John Green fans, who call themselves “Nerdfighters.” Starting Monday, Green also embarked on a multi-city tour across the U.S., which kicked off in Manhattan.

At 570 copies sold, Auntie’s Bookstore in Spokane, Washington, had the highest pre-sale totals of Turtles All the Way Down for IndieCommerce stores (as of Tuesday, prior to all orders being processed). General manager Kerry Halls said John Green and his brother, Hank, will be coming to Spokane on October 28 for an event at Lewis & Clark High School, which she believes has been a big part of this sales success. 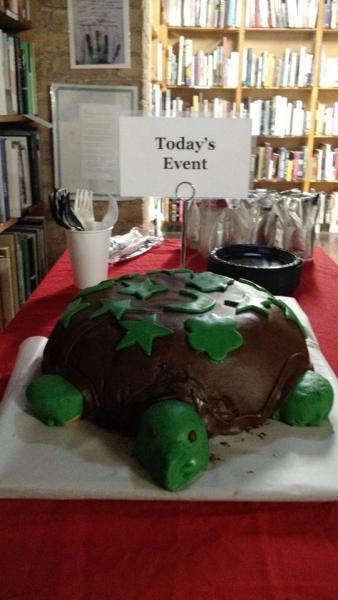 “We sold out of our pre-sale tickets in two-and-a-half weeks, and the venue holds 700-plus people. We were having people order the book and then get a ticket, and I think we sold out of all of those,” said Halls. “We were just like, holy smokes! It was this incredible thing of beauty. It’s so cool to see people get so excited about a book release.”

Other bookstores opened early on the 10th, like Bridgeside Books in Waterbury, Vermont. Owner Hiata Defeo said they opened the store at 6:00 a.m. and the first customers, some of whom were still wearing their pajamas, came through the door at 6:10 a.m.

“We had a brisk business until about 7:45 a.m., when folks were heading to work and school; then it picked up again around 9:30 a.m., our usual opening time,” Defeo told Bookselling This Week Tuesday. “We sold several copies throughout the day, and there are only a few signed copies still available. We had students, local teachers, librarians, and parents all coming in to pick up copies. Everyone was so excited about the signed copies, which was a huge selling point!”

“Waterbury is a small town of about 5,000 people. Our customers love these types of events and there’s always a buzz around town,” Defeo added. “One of my high school employees was at the shop at 5:50 a.m. because she really wanted to see people and pick up her own copy.”

Kevin Elliott, manager at Seminary Co-op’s 57th Street Books in Chicago, Illinois, said the store’s midnight release party was pretty low-key, with 10 customers spending the night at the store to do John Green-related activities, like watching a projection of John and Hank Green at Carnegie Hall; eating a specially made turtle cake; and engaging in three rounds of trivia (Round 1: Turtle Trivia; Round 2: Teenage Mutant Ninja Turtle Trivia; Round 3: John Green Trivia).

Throughout the night, staff also recorded attendees’ video messages to Green in the style of the Greens’ Vlogbrothers videos, editing together a “Good Morning, John Green” video, which they tweeted at Green. Elliott, who came up with the video project, punctuated the end of the video with his heartfelt thanks as a bookseller.

“I used to be very active on YouTube and pre-YouTube videoblogging in my early 20s as a fan of Ze Frank, who also inspired John and Hank Green to get started in vlogging,” Elliott told BTW. “While not a full-fledged participant in the Nerdfighter community, I’ve watched John and Hank’s videos since they began and I’ve always respected the ways they have used the video platform to begin positive projects.”

According to Elliott, while the store hasn’t produced many videos yet, they do have some very creative people on staff who have done projects like this in the past, including one for a Dr. Seuss Party. More photos from Seminary Co-op’s Turtles All the Way Down release party can be viewed on the store’s Instagram page.