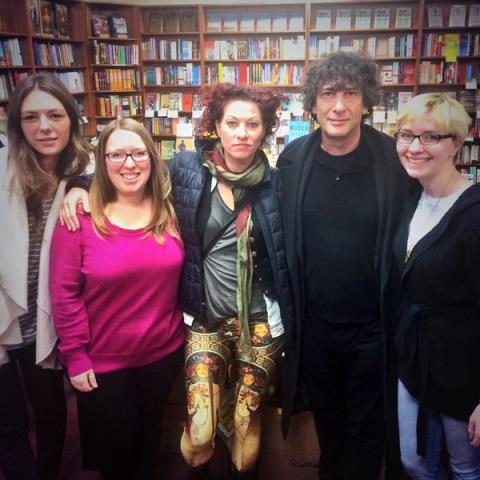 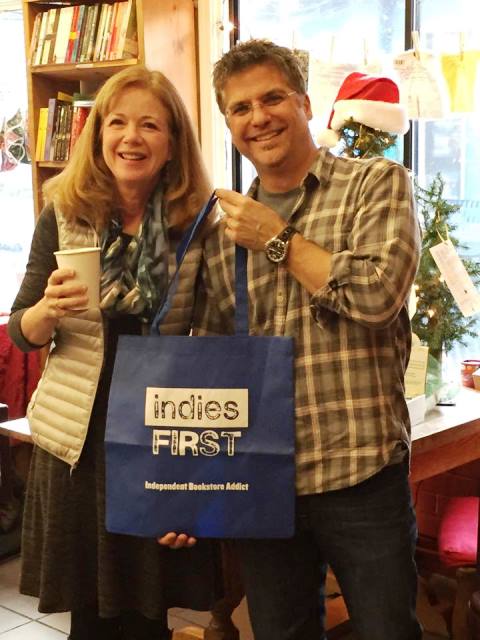 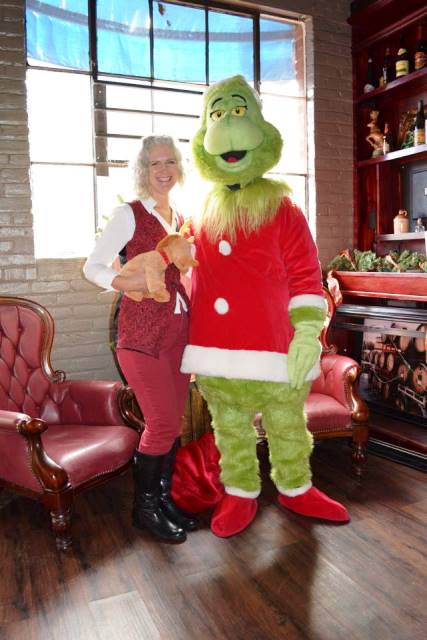 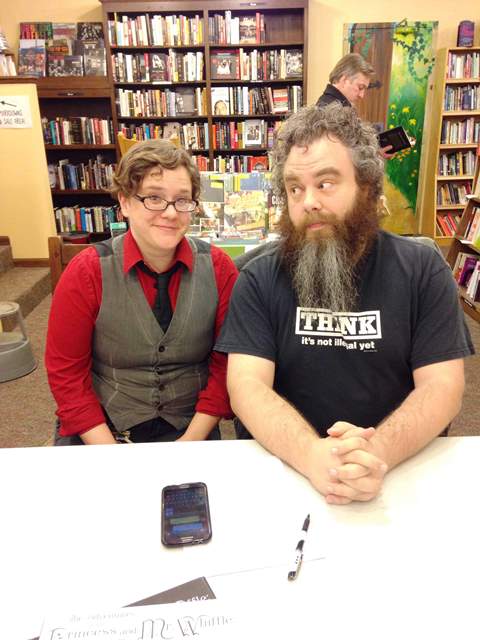 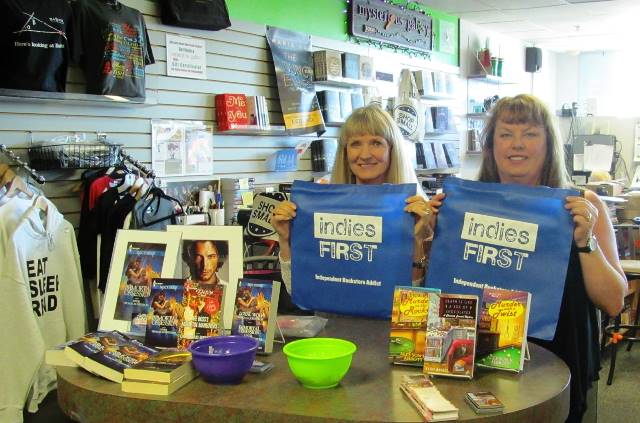 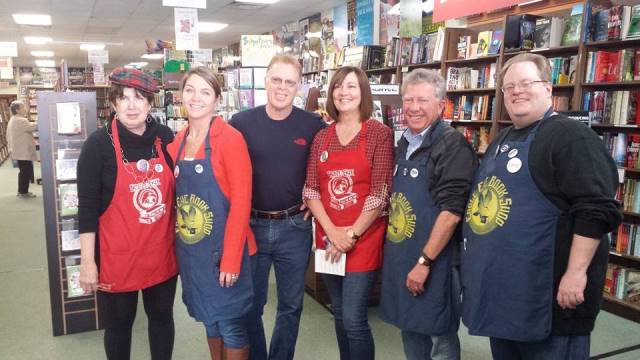 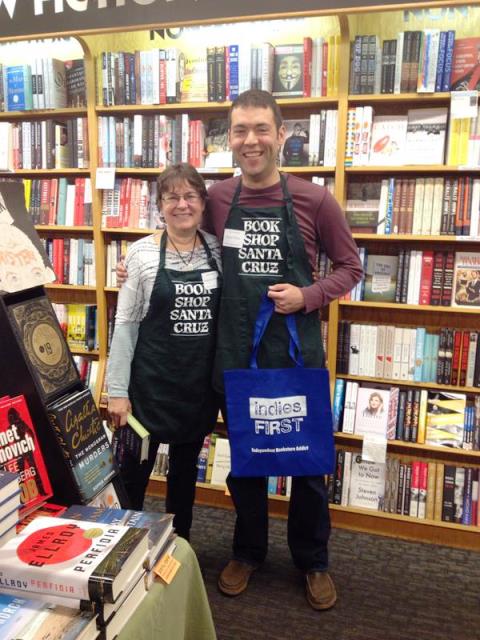 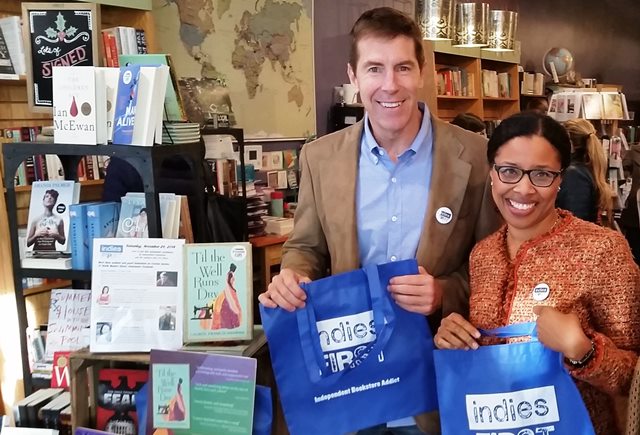 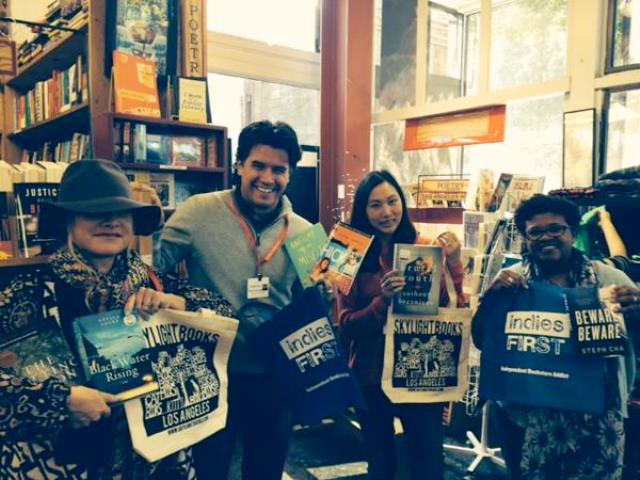 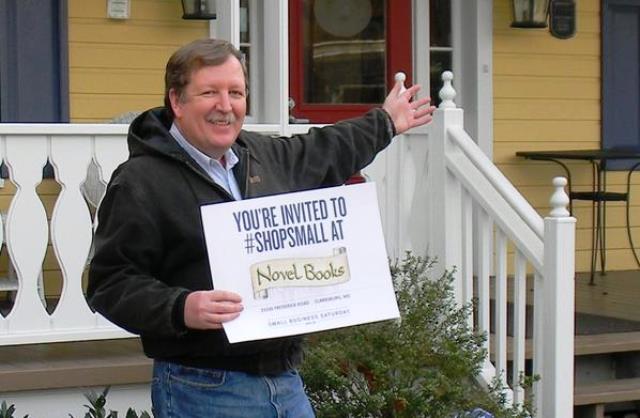 The second annual Indies First on Small Business Saturday marked the kickoff of the holiday shopping season for Main Street businesses, and with more than 420 bookstores hosting 1,200-plus author volunteers on Saturday, November 29, independent booksellers across the nation were celebrating in full swing.

Throughout the day, stores shared photos of authors greeting customers, posing with their Indies First totes, and hand-selling their favorite picks, and, overall, the #indiesfirst hashtag produced more than 56 million impressions across social media outlets in November.

The Golden Notebook in Woodstock, New York, was one of three bookstores to welcome Indies First spokespeople Neil Gaiman and Amanda Palmer. Jacqueline Kellachan, co-owner since 2010, said the day was fantastic, and she noted that, in addition to Palmer and Gaiman, “we had six other authors in the store,” including Martha Frankel, Carey Harrison, Nina Shengold, Carol Goodman, Beverly Donofrio, and Sari Botton. “All the authors had a great time.”

“This is a day to celebrate independent bookstores and what we can do,” noted Kellachan. The store is heading into December with plenty of exciting events on the agenda, which Kellachan said is “what keeps bookstores relevant in their communities. You have to think of different ways to get the community in and give them an experience that’s completely different from what they’re getting online.”

Following their visit to Oblong Books & Music in Rhinebeck, Gaiman and Palmer stopped at Hudson’s local music shop, Musica, to pick up some accordions (the music store confirmed its biggest one-day sale of accordions ever) before proceeding on to Spotty Dog.

Throughout the afternoon, Palmer and musician friend Lance Horne “serenaded the crowd” with accordion performances atop the bar, and Gaiman and Palmer pulled pints and signed copies of their books for eager customers. “Both of them were great with their fans, taking lots of time to hang out and talk to everyone and encourage book sales,” said Drahushuk. “We can’t believe we lucked into this opportunity. We really can’t thank Neil and Amanda enough.”

Politics & Prose Bookstore in Washington, D.C., was treated to its own celebrity sighting on Saturday: a visit by President Obama, who, together with daughters Malia and Sasha, browsed titles and made purchases. This was the second year in a row that the president shopped at the bookstore on Small Business Saturday, and the family purchased 17 titles, according to a list released by the White House, both children’s and adult, including National Book Award-winning Brown Girl Dreaming by Jacqueline Woodson (Nancy Paulsen Books); The Narrow Road to the Deep North by Richard Flanagan (Knopf), winner of the 2014 Man Booker Prize for fiction; and the number-one May 2014 Indie Next List pick All the Light We Cannot See by Anthony Doerr (Scribner).

Indies First festivities continued across the nation as Liberty Bay Books in Poulsbo, Washington, welcomed 10 authors on Saturday and a reported great turnout by customers, leading to the store’s biggest day of sales so far in 2014. “Customers thought it was great to have authors in the store and be able to meet them,” said Liberty Bay’s Madison Butler. “We definitely had all hands on deck to keep up with the amount of traffic in our store.”

Customers were treated to a 15 percent discount on titles written by visiting authors, sales on cookbooks, 2015 calendars, and boxed holiday cards, and photo opportunities with costumed Seuss characters the Grinch and Cindy Lou Who.

“It was so wonderful to have so many people make a special effort to Shop Small with their local independent bookstores,” said Butler. “I think the whole movement has really put the spotlight on our bookstores and made people think about where they spend their money instead of what may be most convenient.”

Fort Collins, Colorado’s Old Firehouse Books planned a full day with authors Natasha Wing, Donna Cooner, Bill Lamperes, Karen Fritz, Kerrie Flanagan, and J. S. Cooper. “They all seemed to have a wonderful time sharing favorite books with our customers,” said events coordinator Kelsey Myers. While the store did not see a big increase in sales, the events were highly enjoyed by all, Myers added.

A morning Grinch Christmas party welcomed parents and children for hot cocoa and activities, with kids making Grinch-kabobs (green grapes, banana slices, strawberries, and marshmallows) and Grinch masks and pledging to commit three good deeds in December. Children were also invited to select their favorite book for the Grinch to pass along to Project Self-Sufficiency, a nonprofit that assists low-income single parents and their families. “In the end we were able to donate five dozen books to Project Self-Sufficiency, and the kids who attended got to have fun while celebrating the true meaning of Christmas,” said Myers.

At A Room of One’s Own Bookstore in Madison, Wisconsin, events coordinator Gretchen Treu said, “We had an excellent turnout! Our authors told us that they really enjoyed the event, shoppers were excited and satisfied, and staff members were on our toes all day!” In addition to authors Jesse Klausmeier, Dale Kushner, Kevin Henkes, Bridget Birdsall, and E.M. Kokie, the store hosted New York Times bestseller Patrick Rothfuss, who drew “a steady line of excited people.”

Structuring the event differently this year, Treu saw success in hosting two authors at a time, one children’s and one adult, for two-hour blocks. The store also set up dedicated tables as “author stations” with Indies First signage, where the volunteers could hand-sell both their books and copies of their favorite picks, which the store ordered ahead of time. “The authors seemed to like the structure — it made them more visible, and having books they were prepared to recommend helped them connect with readers in a way they don’t often get to do at straightforward book signings,” said Treu.

Joanna Parzakonis at Kalamazoo, Michigan’s Bookbug said the store’s Indies First “sales exceeded our expectations and last year’s levels. The enthusiasm in the store was great and authors did a great job greeting the customers.”

Authors Bonnie Jo Campbell, Susan Ramsey, and Leslie Helakoski visited with customers and talked up their favorite books. Discounts on signed stock were popular, and ARCs wrapped in Indie Next List fliers were a hit as a free giveaway upon checkout. “It looks like newspaper wrapping, but it’s also advertising for books that we love coming up this season,” said Parzakonis.

Guest booksellers Nancy Means Wright, Sara J. Henry, and Stephen Kiernan took shifts throughout the day at The Vermont Book Shop in Middlebury, Vermont. Sales and Marketing Manager Jenny Lyons said the day was busy and fun, and sales were up over last year. “The authors seemed to truly enjoy connecting with our customers and hand-selling books. It was heartening to see the community come out in support of us and all of Middlebury’s small businesses.”

In addition to the authors present — Sarah Dessen, Nathan Kotecki, and Ursula Vernon — Flyleaf gave away Indies First and Shop Small tote bags, as well as canvas bags from a publisher for people spending more than $75. The customers at the store “were all very aware of Indies First or Small Business Saturday, or both,” said Fiocco. “It was really amazing the level of awareness was with the public. We certainly promoted it, but people specifically come in to spend money with us because of the Small Business Saturday promotion.”

On the opposite coast, Mysterious Galaxy Bookstore in San Diego, California, celebrated Indies First and Small Business Saturday just days ahead of its December 6 move to a new location. The store saw sales increase 30 percent over 2013, which co-owner Maryelizabeth Hart credited to more author participation resulting in greater reader awareness, and nearly half of all purchases were made with American Express cards.

“Readers embraced the recommendations of 10 bookseller authors throughout the day, the American Express Small Business Saturday credit offer, and [Small Business Saturday] and Indies First bag rewards with enthusiasm,” said Hart. “People were delighted to see authors they enjoy, appreciated the authors in their bookseller roles, and bought a bunch of the authors’ recommendations.”

Eagle Eye Book Shop in Decatur, Georgia, which brought in 15 authors to celebrate Indies first and participated in the North Decatur Small Business Stroll, saw a 35 percent increase over last year’s sales. Additionally, CBS TV affiliates WAGA and WGCL visited the store to film for a news broadcast. Despite battling for attention against the concurrent Georgia Tech vs. University of Georgia State football game, “Quite a few [customers] came by to meet the authors,” said owner Doug Robinson. “Everyone was in a great mood.”

Read more about the full reach of the second annual Indies First in this week’s BTW.