Small business organization Independent We Stand has kicked off a new contest to promote the importance and economic benefits of Main Streets and the small businesses that support them.

Participants can have their towns recognized by nominating them at MainStreetContest.com. Any Main Street in the U.S. is eligible, and the words “Main Street” do not need to be part of the street name to qualify.

The winning Main Street will win $25,000 cash, plus a number of prizes. The America’s Main Streets contest is presented by STIHL Inc. and FCA US BusinessLink and supported by Main Street America, Alignable, Do it Best Corp., the National Federation of Independent Businesses, the North American Retail Hardware Association, PPG Pittsburgh Paints, and Tire Pros.

Mississippi authors have released a joint statement calling for the repeal of the recently enacted House Bill 1523, which prevents punishment for people who refuse to provide services to people because of a religious opposition to same-sex marriage, extramarital sex, or transgender people.

Supporters of the legislation recently signed into law by Mississippi Gov. Phil Bryant say the bill protects the religious freedom of those who oppose same sex marriage, but opponents say it sanctions statewide discrimination despite the recent legalization of same sex marriage by the Supreme Court.

In the joint statement, 95 authors, including Donna Tartt, Jesmyn Ward, and John Grisham, said that they “stand opposed to any violation of civil rights, including discrimination against LGBTQ citizens.” It reads, in part: “Mississippi authors have written through pain, and they have written out of disappointment, but they have also written from wonder, and pride, and a fierce desire to see the politics of this state live up to its citizens. It is deeply disturbing to so many of us to see the rhetoric of hate, thinly veiled, once more poison our political discourse.”

The entire statement can be read here.

The Audio Publishers Association (APA) Tea at BookExpo America 2016 will present four bestselling authors talking about their craft, creativity, and inspiration, with a focus on the growing audiobook landscape.

The tea takes place on Friday, May 13, from 3:30 p.m. to 4:30 p.m. in Room W183 at the McCormick Place convention center in Chicago. Booksellers who are interested in attending the Audio Publishers Association Tea should visit the BookExpo America website to register.

A 12-and-a-half minute film celebrating the centennial anniversary of the Pulitzer Prizes is now available on the Pulitzer website.

The film, which was created in cooperation with the Newseum in Washington, D.C., pays homage to the past, acknowledges the present, and addresses the future of the prizes, according to Prizes Administrator Mike Pride. It also reflects the four themes of the 100th anniversary celebration: Social Justice and Equality, War and Peace, The Presidency, and Power and Accountability.

Booksellers are encouraged to upload the video link to their store websites and to share it on social media to spread the word about the Pulitzer Centennial celebration and Pulitzer Prize-winning books.

The video, which debuted at the Poynter Institute’s Pulitzer centennial marquee event earlier this month, will be shown at events around the country throughout the rest of the year.

The Pulitzer Centennial video can be accessed here.

Sourcebooks has acquired its first project through its submit2sourcebooks program with Wattpad, a free app for writers.

Founded in 2006 in Toronto, Canada, the Wattpad app allows aspiring authors to submit their work for editors’ consideration by adding an extra tag to their story on the platform. With the tag, the publisher can see how readers are reacting to and interacting with a prospective author’s work. Wattpad stories are serialized and the app allows users to participate through comments, messages, and multimedia.

The submit2sourcebooks program launched in July as a way to both create new opportunities for Wattpad writers and build on Sourcebooks’ success publishing Wattpad YA authors such as Natasha Preston (The Cellar and Awake) and Ali Novak (My Life With The Walter Boys and Heartbreakers).

For more details on the partnership, visit Wattpad’s website.

Spiegel & Grau executive editor Chris Jackson has been named publisher, vice president, and editor-in-chief of Random House’s dormant One World imprint. Reporting to Susan Kamil, Jackson will work on revitalizing and expanding the imprint to relaunch for publication in fall 2017.

Founded in 1991, One World has a multicultural focus and publishes both fiction and nonfiction. One of the imprint’s more notable publications is the paperback reprint of The Autobiography of Malcolm X.

Jackson had served as executive editor at Spiegel & Grau since 2006. Previously, he was an editor at Crown, also an imprint of Random House.

An April 15 memorial service is planned for Glenn Ellis, a longtime member of the sales team at Penguin Random House and its predecessor companies for more than four decades. Ellis died on April 11 at the Calvary Hospital Hospice in the Bronx, New York.

Ellis began as a field rep for Random House in the 1970s, quickly rising to a variety of management positions, and was most recently vice president, director of adult field sales, from 2008 until he stepped down in 2014.

“What Glenn knew best was this: how to create leaders,” said Jaci Updike, president of sales for Penguin Random House. “He had an extraordinary talent for knowing how to make his team feel fully supported, while at the same time pushing them to achieve even more. With calm strength and an unflagging commitment to service, Glenn taught others how to identify and nourish talent, and how to manage complex changes in a way that made the team — and the relationship with our customers — even stronger. The roster of people who were touched by Glenn’s mentorship includes sales and publishing, both at Penguin Random House and many other publishing houses, small and large.”

The memorial service for Ellis will begin at 1:00 p.m. on Friday at the Fred H. McGrath & Son Funeral Home at 20 Cedar Street in Bronxville, New York. In lieu of flowers, donations to Memorial Sloan Kettering Cancer Center or Calvary Hospital Hospice are suggested.

At last week’s workshop retreat “Owning A Bookstore: The Business Essentials,” facilitated by The Bookstore Training Group of Paz & Associates and co-sponsored by the American Booksellers Association, Donna Paz Kaufman and Mark Kaufman led a team of 12 book industry trainers who shared best practices of bookstore retail management with prospective and existing booksellers from across the country. 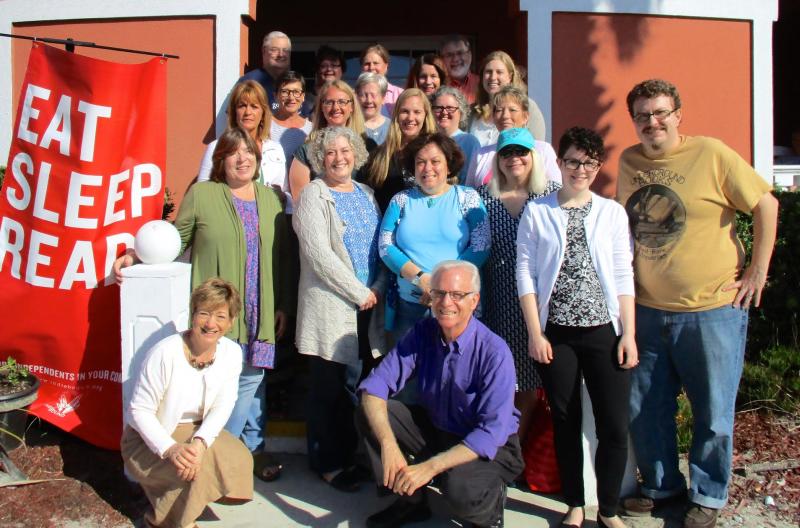 The next workshop from Paz’s Bookstore Training Group is scheduled for August 23–26, 2016 in Franklin, Massachusetts, at An Unlikely Story, the bookstore owned by Diary of a Wimpy Kid series author Jeff Kinney.