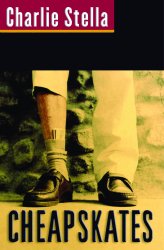 "I'm a big romantic at heart," said Charlie Stella -- a statement that might startle readers of this Brooklyn-raised author, whose four published novels, including the just-released Cheapskates (Carroll & Graf), describe the often quite unromantic doings of various small-time East Coast hoods and hustlers.

But Stella began writing his gritty chronicles of streetlife a few years ago, he noted, for a reason as romantic as anything in the works of F. Scott Fitzgerald: to win the attention of a woman he'd met.

"I was ... running out of time," Stella recalled recently in a phone call from New Jersey, the morning after the launch party of Cheapskates in a Manhattan bar he used to frequent. "I was a bookmaker -- the kind that takes bets on the street. So I was making a lot of money. And every once in a while I'd work six months or a year as a word-processor, for my insurance -- medical stuff. And I met Anne Marie at work, on the job, and I just decided, 'I'm going to take a shot at it.' I did it literally to impress her. So I started to write and feed her chapters, and, little by little, I had a book. And then I tried for an agent. I got an agent. And, next thing I know, the book was sold. And it all came about because I tried to impress the woman I'm now married to."

Before this breakthrough, the 48-year-old Stella had written sporadically ever since college, he said. The son of a lithographer ("a knockaround guy"), Stella went to school in North Dakota on a football scholarship. There, an English teacher named Dave Gresham changed his life, he said: "He read the opening of [George V. Higgins's] The Friends of Eddie Coyle in our class, and I was hooked. I became a reader and a writer."

But Stella married young, fathered three children, and took a variety of non-literary occupations to earn a necessary living. "I was a window cleaner in Manhattan, up on the scaffolds, on the skyscrapers," he said with a chuckle. "I did like two or three jobs most of my life, until I got divorced. And then I had to take on some other stuff, and I did some street stuff."

All the while, though, "kind of on and off," Stella kept trying to write. "I would go take a wild shot at it, every once in a while -- and usually get depressed about how hard it is to get started. I would try a novel, then give it up." But he did get a couple of plays produced off-off-Broadway, in his early thirties. And he kept sending his work to his old college mentor in North Dakota.

"He was a great, great teacher," Stella said, of Gresham, "just a terrific guy -- probably the smartest guy I know. Kind of a fountain of inspiration; he just constantly encouraged me to keep going."

When Stella's first book, Eddie's World -- the one inspired by Anne Marie -- was published in 2001, the author dedicated it to Dave Gresham.

In that novel, and in its three successors, Stella has resurrected the world of urban adventure he himself was once a part of. He brings affection and a sense of humor, he said, to his depiction of that seemingly harsh environment.

"I really was like 18 years involved in the street stuff, and it's one of the funniest worlds you'll ever know. I mean, they're just funny guys. Not that they're stupid; not that they're clowns, but -- a lot of the stuff that goes on is just hilarious. Some of it's dark humor; some of it's not so funny. But in the end, it's kind of [a] microcosm -of life: If you look at it from a certain angle, you know, you have to laugh at it.

"I'm not talking about murderers. I'm talking about guys that are doing hustles on the street: You know, bookmakers, scam artists -- things like that. That world, as bad as it is and it appears, there are also some endearing characters in it. A lot of those guys are just trying to make ends meet so they can send their kids to college."

Several of Stella's fictional characters, crooks and cops alike, appear in more than one of his books, a notion he said he got from Elmore Leonard. "When I read Elmore Leonard, I became like an instant fan ... The whole idea of overlapping characters, it always stuck in my head that, 'Boy, if you ever get so lucky where you can get a book published, this is something to shoot for.' So rather than a private eye series, or one protagonist going through all my books, what I do is -- all four books kind of relate back and forth."

"I've met like a worldful of them," he said. "Not only a community of writers who are published, but a lot of guys who are just getting their feet wet and trying to break in. I remember how tough it was, going back when I started, and what I'm finding is that everybody really, really does work together.... You know the publishing business, how tough it is today; but they're really good talent, and I'm sure they'll break in."

"That is probably the most generous man on the face of this earth," said Stella. "Ken -- God -- he's just wonderful. The thing about Ken is that he can't do enough for other people. And that was just way over the top being nice, what he did there. That's an honor."

There's another author who continues to have a tremendous influence on Stella, he said: George V. Higgins, whose prose about Massachusetts tough guys, read aloud in a North Dakota college-classroom, years ago made a young fellow from Brooklyn want to write stories of his own.

"No, actually I didn't [ever meet him]," Stella said. "But I have an autographed copy of one of his books hanging on the wall here, over my computer ..."-- Tom Nolan