Chefs Unite for Food Relief With Soup for Syria Cookbook

More than 80 famous chefs and cookbook authors from around the world have come together to assist with food relief efforts for Syrian refugees by contributing recipes to Soup for Syria: Recipes to Celebrate Our Shared Humanity, coming October 1 from Interlink Books. 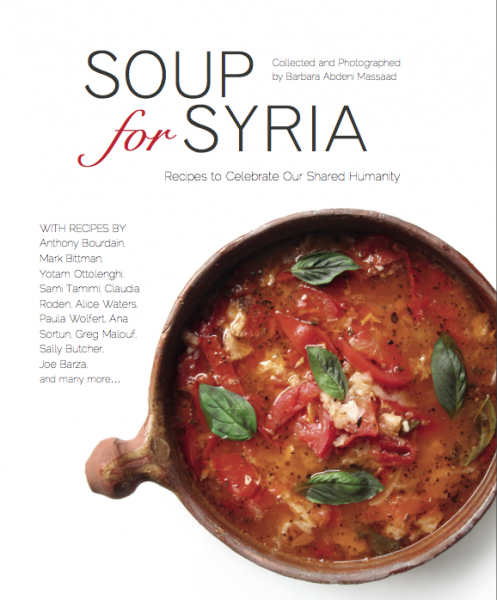 The fundraising idea is a collaboration between Michel Moushabeck, publisher and editor of Interlink Books in Northampton, Massachusetts, and food writer and Beirut, Lebanon, local Barbara Abdeni Massaad, author of Interlink’s bestselling cookbook Man’oushe: Inside the Street Corner Lebanese Bakery.

Among the well-known chefs who have contributed a recipe to the cookbook are Yotam Ottolenghi, Sami Tamimi, Anthony Bourdain, Mark Bittman, Alice Waters, Paula Wolfert, Claudia Roden, Sally Butcher, Ana Sortun, Greg Malouf, and Aglaia Kremenzi. The book’s color photographs of the soups and of refugees were taken by Massaad.

Profits from the sales of the book, which will have a U.S. print run of 10,000 copies, will be sent to the United Nations High Commissioner for Refugees (UNHCR) for the express purpose of funding food relief efforts for Syria’s four million refugees. Violent civil unrest and the presence of ISIS in their country have caused these refugees to flee to neighboring Lebanon, Jordan, Turkey, and Iraq, but while wealthier countries ignore the problem, the need for food relief for these displaced Syrians is great and growing, said Interlink’s Moushabeck.

At last year’s Frankfurt Book Fair, Massaad told Moushabeck she had been cooking for the refugees at one of the camps near her home in Beirut and was looking to self-publish a soup cookbook with recipes from chefs she knew.

“I thought, if we could get celebrity chefs to donate recipes, we can turn this from a one-person initiative into a global movement and really sell tons of books, and help the refugees in a much greater way,” Moushabeck told BTW. “We were really amazed and heartened by the outpouring of support for this book. Interlink is now 30 years old, and this is our very first initiative like this.”

Moushabeck said the publisher’s Soup for Syria website should be live in about a week’s time and will offer information on the project, updates on how much money has been raised so far, and ideas for creative ways to help, from hosting soup parties to offering the book for sale at farmer’s markets and events at churches and mosques.

For booksellers, Interlink is also offering an event kit that will include posters, recipe cards, background information on the refugee crisis from the U.N., as well as blank cards for recipe-sharing. The publisher is also providing display signs with the UNHCR logo for booksellers who place orders.

Moushabeck, whose daughter Hannah is the former director of the Children’s Department at Odyssey Bookshop in South Hadley, Massachusetts, said several bookstores are already planning events to promote the book, including Seattle’s The Elliott Bay Book Company, which is teaming up with local Middle Eastern restaurant Mamnoon.

Some of the contributing chefs are also holding book-related events at their own restaurants, said Moushabeck, such as Ana Sortun, James Beard Foundation Best Chef of the Northeast winner, at Oleana in Cambridge, Massachusetts.

“We also have many different organizations coming on board that will use the book for fundraising,” Moushabeck said, including the Syrian American Medical Society.

Soup for Syria will also be published by Pavilion Book Group in the U.K.