Chevalier’s Books, which claims the title of oldest independent bookstore in Los Angeles, has been serving the local neighborhood since 1940, when its original owner, Joseph Chevalier, started the business as a lending library. 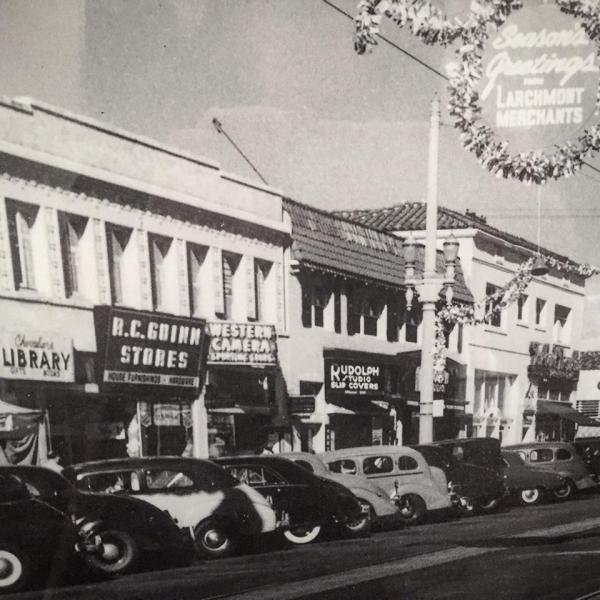 Known today for its community spirit, expansive children’s section, and welcoming atmosphere, the 76-year-old Chevalier’s is located in a 1,500-square-foot space in Larchmont Village, a diverse and densely populated half-square-mile historic neighborhood in central L.A. that is full of ethnic restaurants, sidewalk cafés, and boutiques bordered by historic homes.

In 1990, when Chevalier reluctantly retired due to a heart condition, former high school teacher Filis Winthrop, a part-time bookseller at Chevalier’s, bought the store in partnership with a fellow staff member, Gilpin Netburne.

When Chevalier ran the store as a lending library, customers could rent a book for a few cents a day, said Winthrop. “I kept a little memory box in the store that has some of the paper covers they used on the books. They say ‘two cents’ on them.”

Winthrop, who sold the store in late 2014 to Darryl Holter and Bert Deixler, said some of her fondest memories involve the movie stars who visited the store on breaks from work at the nearby Paramount movie lot, including Julia Roberts, who would regularly sit with her kids in the children’s section. “We were then only a few blocks from the Paramount studios so we got a lot of movie people and actors,” Winthrop said. “They would come in all the time. But a lot of the stars who were around our area were not the ones who were really glitzy.”

One of the store’s best qualities is that it has always been very neighborhood-oriented, she added. “It’s in an old neighborhood where people all know each other. It became the meeting place for gossip, for friendly arguments, where everybody gathered to talk about the books they liked.”

In 2014, when it came time for Winthrop to retire, she sold the store to Holter and Deixler. Holter runs numerous businesses as CEO of the Shammas Group. A historian, he is also the author of Woody Guthrie L.A.: 1937 to 1941 (Angel City Press) and recently appeared at the Southern California Independent Booksellers Association (SCIBA) fall trade show. Bert Deixler is an attorney and a law professor; both are on the board of directors of the Los Angeles Review of Books. Day-to-day operations at Chevalier’s are overseen by store managers Erica Luttrell and Liz Newstat.

“I had several people interested in buying, but I just wasn’t sure they were going to do what was best for the store, so I just kept looking and looking,” said Winthrop. “Bert and his wife had a charge account with us, and they were big readers. I didn’t know Darryl at the time. Bert and I talked a lot about it, and I finally realized that he really wanted what was good for the store.”

Holter told Bookselling This Week that when Borders shut down in 2011 he felt there was space for independent bookstores to thrive.  He and Deixler thought Chevalier’s, which was struggling financially at the time, could still be a successful venture, just with a few changes.

“I concluded that indie bookstores like Chevalier’s that survived up to this point have three things, " he said. “First, you need people who want to come in for the experience of being seen and of seeing other people; second, you need good demographics; third, your store needs to have some kind of a following, an affinity among people that goes back to a shared history.”

Some of that shared history comes from the unique neighboghood of Larchmont Village, which is bursting with independent stores and restaurants.

“This neighborhood has never really been full of chain stores; there are no Starbucks, there are more independently run coffee shops,” said Holter of the two-block commercial stretch. “Larchmont has always been a cute neighborhood shopping area surrounded by relatively affluent professional-type people and academics. It’s the kind of place you don’t see too often. It’s unique.”

Once the transition to new ownership was complete, Holter and Deixler got down to business renovating the store. Overall, they sunk a fair amount of money into updating Chevalier’s for the future, said Holter.

“We took everything out. We closed the store for two weeks and we put in all new cabinets; we moved the counter; we created an annex [for the store’s cookbooks, art books, and L.A.-centric books]; and we added new types of books, like humor, science fiction, and graphic novels.”

Bookstores like Chevalier’s are part of the intellectual infrastructure of Los Angeles, said Holter, and he and Deixler will continue to make sure that Chevalier’s supports that infrastructure. Among the frequent literary and community events the store hosts are author readings and signings, story time for kids, a monthly open mic poetry series, book clubs, panel discussions with local authors, and numerous off-site initiatives, including book fairs in partnership with local schools, churches, and temples.

Even at the age of 95, Winthrop is still a regular customer at Chevalier’s. Under the direction of Holter and Deixler, she said, it looks like the legacy of Chevalier’s will continue for years to come.

“I go to the bookstore every day at least for a short while, so I see that we are holding our own, which is great. I am thrilled,” said Winthrop. “It’s so important to me that we keep the store going, and I hope we do.”