At this year’s BookExpo America education session “Common Core: Insight From Industry Touchpoints,” a panel of publishers, booksellers, and educators shared their experiences working with the new state education standards. 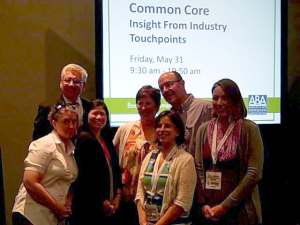 Melissa Jacobs-Israel stressed that publishers, educators, and booksellers need to become familiar with the Common Core State Standards. “When I started to read them,” she remarked, “I got really excited because it’s about critical thinking … We’re teaching kids to think. What a concept!” Jacobs-Israel sees a role for booksellers in helping to expose young readers to engaging texts. “I want to walk into a bookstore and see nonfiction displayed as prominently as fiction,” she said.

The Booksource’s Cheryl Dickemper also expressed a desire to “embrace” the Common Core and had positive news for the audience. “Common Core demands trade books,” she said. “We’ve seen an increase in business.”

Dickemper spoke at length about text complexity, a hot button issue for the new standards, and noted that Appendix A features a three-part model for measuring text complexity: qualitative measures, quantitative measures, and measures based on reader and task. The reader and task measure focuses on what students are being asked to do with a text, and it requires specific information about a particular school district or classroom. This is an area where an experienced, local bookseller can make a big difference, Dickemper said. She emphasized, however, that for the first two measures of complexity, “we absolutely need publishers to level their books.”

Kenny Brechner, who has owned and operated Devaney Doak and Garrett (DDG) for 21 years, told attendees that what booksellers can do best to support the Common Core is “filter.” Brechner then explained how he has created buying resources to help his educational partners meet their Common Core needs within the community. He recently launched a subscription service called Ahead of the Curve that allows educators to select to receive titles that DDG has selected or to “pick and choose” titles that suit them best. “It secures their book money at the beginning of the year,” he said. “It’s been extremely successful so far.”

Brechner also maintains a database of new titles that may be of interest to educators, and he regularly sends them targeted e-mail newsletters. “If we want the quality trade books that we love to supplant the stultifying canned curriculum that we loathe in the classrooms — and we do want that — we need to think really carefully about putting our education and our passion for our materials first and let the sales follow.

Appendix B, a document that contains a list of text exemplars, was where Phoebe Yeh started when she began researching the Common Core for HarperCollins. “As soon as we started hearing about Common Core … we realized at Harper, we needed to learn about this,” she said.

Appendix B includes a number of Harper titles, and Yeh set out to analyze what made these specific titles exemplary for the new standards. She found that books showcasing primary sources or that were created through hours of meticulous background research, such as Brave Girl by Michelle Markel, were easy to align with the new standards. Having taken advantage of that realization, “[HarperCollins] sales have increased,” Yeh said.

Noting that “there’s a lot of ‘freak out’ going on” in the educational community regarding Common Core, Becky Anderson called booksellers “the first responders” and emphasized that they need to build lists of outstanding new trade books to share with teachers. Anderson’s, she said, positions itself as a community resource by hosting STEM book fairs and educational book talks.

Anderson then shared a bit of advice from Daniel Pink’s To Sell Is Human: “Be a problem solver,” she said. “Instead of trying to sell, try to solve a problem.” However, it’s important to make sure the eventual sale comes back to your store. Indies can be huge resources for educators, and this expertise should come at a cost, she said. “Get a guarantee before the book talk.”

Victoria Stapleton reinforced that it is vital to have sales reps communicate how titles relate to the Common Core Standards during conversations with booksellers. “If a tip sheet is written from a purely commercial point of view, it’s not highlighting the aspects of the particular title that are helpful for [booksellers] to talk to their clients,” she said, noting that at Little, Brown, they are trying to “re-frame this conversation.”

Little, Brown is also developing Common Core Classroom Ready Guides for a mix of backlist and frontlist titles that will include both the relevant standard and an appropriate activity, and the publisher is happy provide these to accounts, Stapleton said.

“I don’t know what’s going to happen with Common Core, but I think it’s up to us to take this moment to seize constructiveness in education, seize the interest in reading, and get kids excited about the possibilities within a book,” Stapleton stressed. As for Appendix B, she added, “there’s room for judicious refreshing.”