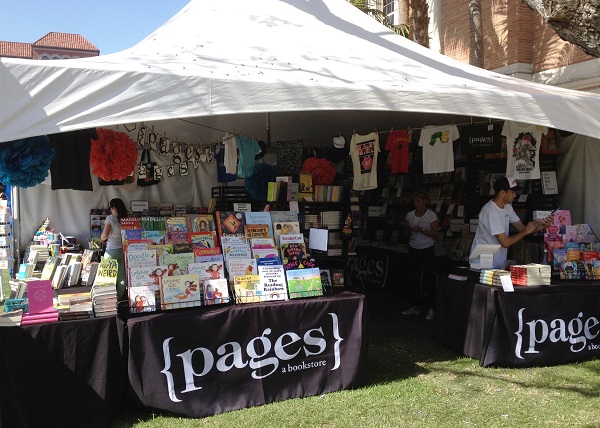 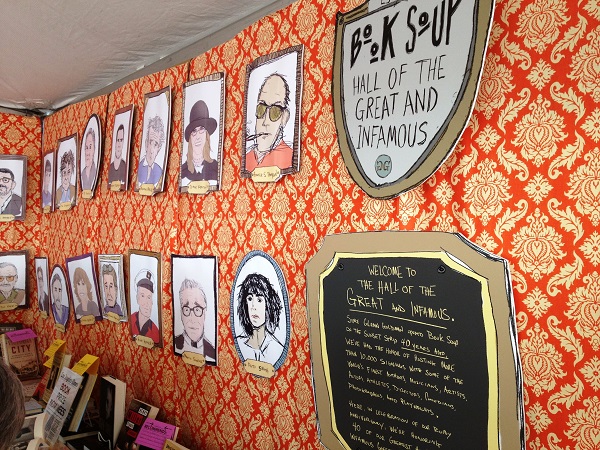 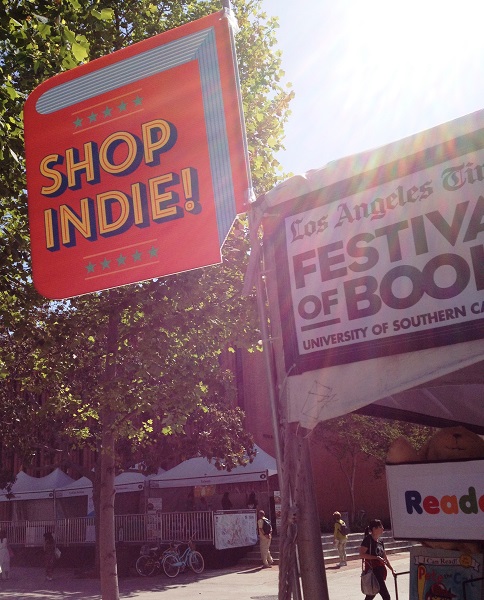 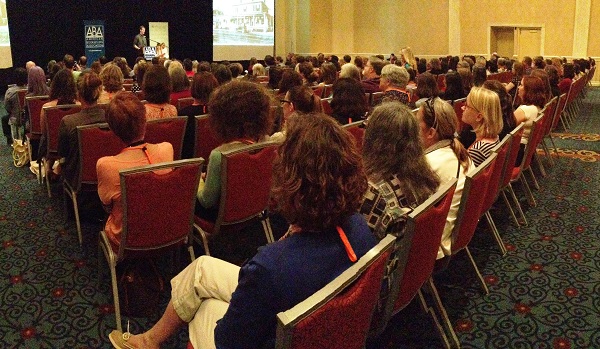 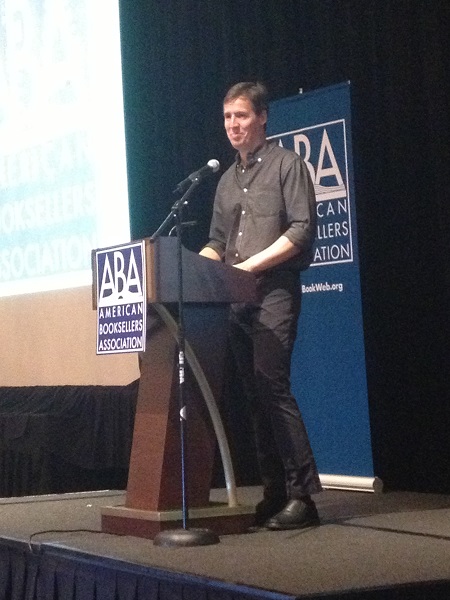 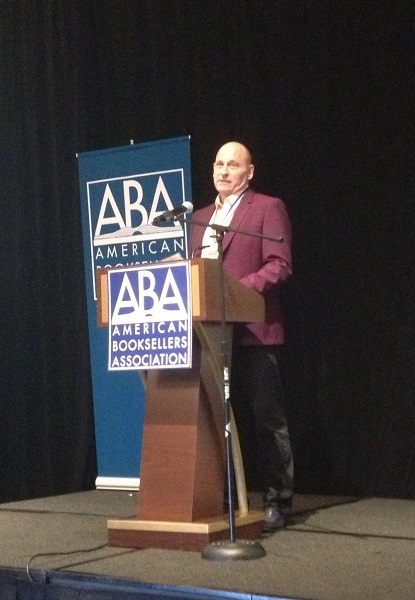 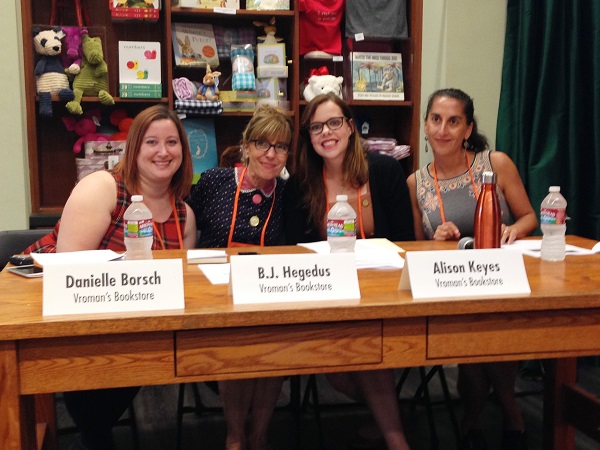 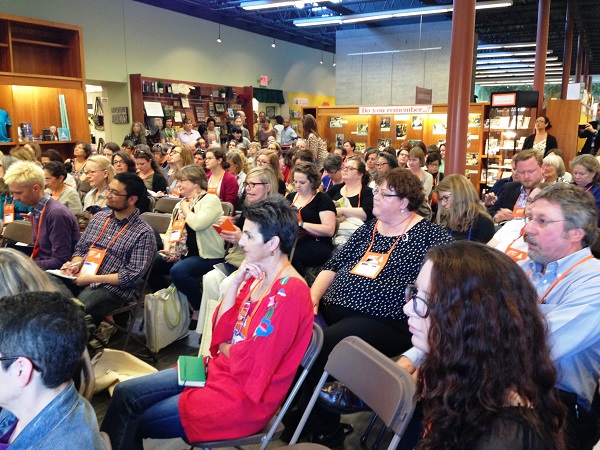 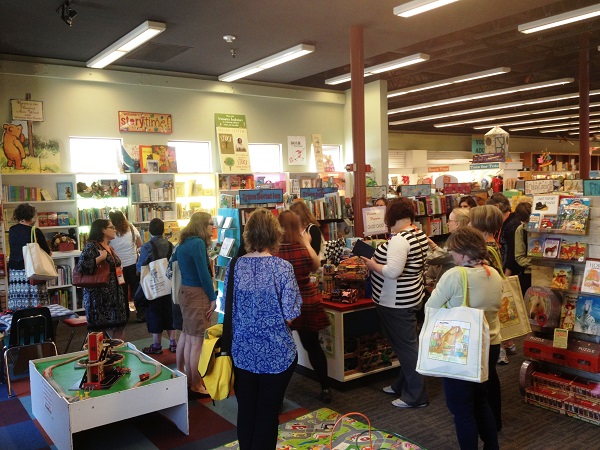 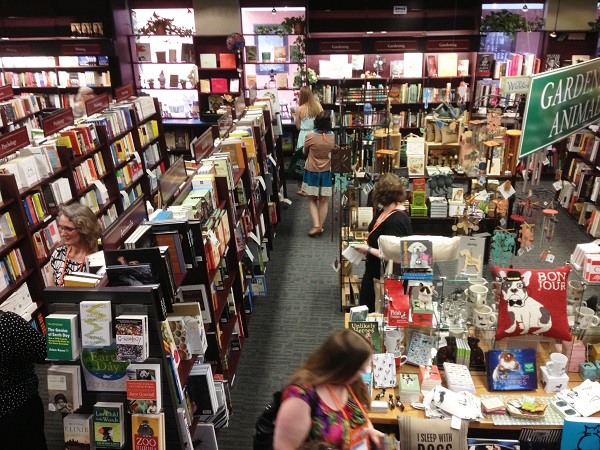 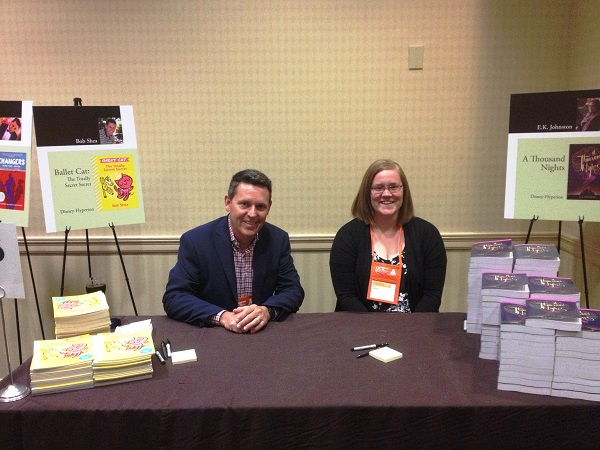 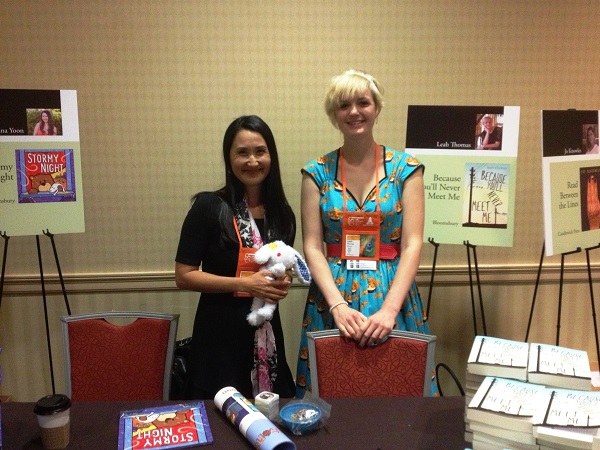 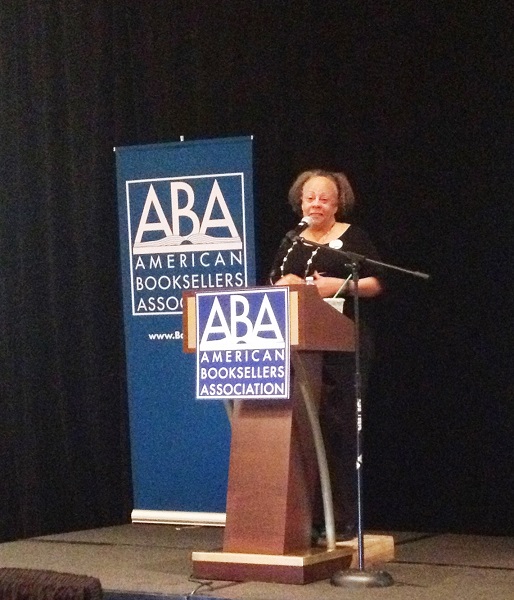 This week, approximately 190 booksellers converged in Pasadena, California, for the 2015 ABC Children’s Institute. Hosted by the American Booksellers Association and the ABC Children’s Group at ABA, this year’s institute featured 10 education sessions, three keynote presentations, and two featured talks, all made possible by the support of lead sponsor Baker & Taylor, as well as 28 publishers large and small.

Prior to the institute’s April 19 kickoff, many booksellers took the opportunity to visit the LA Times Festival of Books in Los Angeles, where 11 ABA member booksellers were exhibiting their own unique selections, as well as those of their partnering publishers, and colorful “Shop Indie” signage. Nearly 157,000 attendees came out for the festival, setting a new record for the event, and many booksellers agreed that their booths were busier than ever.

“It’s great to see that this many people still come out to book festivals,” said Melissa Reekers, who was tending Book Soup’s packed booth on Sunday. This year, in celebration of the bookstore’s 40th anniversary, the booth was decked out with 40 cartoon-style portraits of the staff’s favorite visiting authors, dubbed the Hall of the Great and Infamous.

As the festival came to a close Sunday evening, booksellers arrived at the Hilton Pasadena for the Children’s Institute’s opening keynote, featuring Jeff Kinney, the author of the Diary of a Wimpy Kid series, who is slated to become an official bookseller when his independent bookstore, An Unlikely Story, opens in Plainville, Massachusetts, later this year.

“I was lucky enough to grow up in a house full of books,” said Kinney, whose mother was an early childhood educator. It was Kinney’s father, however, who brought comics into his home and sparked his interest in creating a newspaper comic strip.

In the face of the contracting newspaper industry, Kinney transformed his goal and set out to create comic stories — in his mind, for adults — and after eight years of work, Abrams adapted the manuscript as a children’s title and published the first Wimpy Kid book. Since then, “I’ve come to really appreciate how important it is to put a book into the hands of a kid,” Kinney said, especially a physical book. “It connects the reader to a narrative in a way digital devices just can’t.”

Now, after years of working on his books at night — Kinney has kept his day job with Pearson — he is making his foray into bookselling as the owner of an environmentally conscious bookstore on the site of Plainville’s former general store. An Unlikely Story will feature a café, a function space, a telecommuting work area, and, in a nod of the town’s history, recreations of signage from the original general store. There is still work to be done, but the first bookshelves are now in place, and that’s significant, said Kinney.

“Once we got those bookshelves in, it changed my perception — it went from this being a building to being a bookstore,” said Kinney. “I’m very excited to be adding another bookstore to the landscape. I’m very thrilled to be joining your ranks as booksellers. I admire everyone here for your passion and for bringing so much value to your communities.”

Following Kinney’s talk, ABA CEO Oren Teicher welcomed booksellers to Sunday night’s Opening Reception and made note of children’s booksellers’ achievements over the past year, which were especially evident during ABA’s recent spring forums, he said. “You’re all doing pretty well,” said Teicher. “The enthusiasm and success of independent bookstores all across the country has just been wonderful for us to see; so, I congratulate you all.”

The opening reception, co-sponsored by Publishers Weekly, gave booksellers a chance to meet with We Need Diverse Books members Ellen Oh, Aisha Saeed, I.W. Gregorio, Nicola Yoon, and Lisa Yee, who signed books and talked with booksellers about the movement, which has grown from its 2014 beginning as a social media hashtag. “We believe in the power of children’s books in developing empathy and a recognition of our common humanity,” Oh told the roomful of children’s booksellers.

At the Monday morning keynote, author Jon Scieszka made a surprise appearance to welcome authors Mac Barnett and Jory John, who, in their typical quick and witty fashion, shared highlights of their work in promoting literacy, reading, and education in general among young children across the country through the 826 program. “We want to make homework and books feel valued and valuable,” Barnett told booksellers. “At the heart of 826 is the idea that providing free, high-quality writing instruction to every kid is going to generate writers who, hopefully, look very different from the ones we have now.”

At 826, volunteers provide afternoon drop-in tutoring across all subjects, working with teachers and parents to track students’ progress. The space is also used in the morning for school field trips, where kids get to create their own books that are later carried by local independent bookstores, and in the evenings for clubs and workshops. “From the time the staff gets there until 8:00 at night, there’s programming,” said John.

“These spaces are hybrids of community spaces and retail spaces and art spaces. That formula, maybe with different emphases, sounds a lot to me like an independent bookstore,” said Barnett. “Like you, we are trying to do things that cost almost no money but really open up these centers to the community.”

There are now seven 826 chapters in the U.S., plus satellite locations, and each study center is fronted by a small retail shop, which contributes to the funding that runs the programs and serves as a way to get new volunteers through the doors. Valencia’s location boasts a pirate supply store; New York’s, the Brooklyn Superhero Supply Co.; in Los Angeles, the Echo Park Time Travel Mart and Mar Vista Time Travel Mart.

Barnett and John urged booksellers to take ideas from the programs at 826 to incorporate into their stores, including low-cost, authorless events and workshops, such as teaching children to write shelf-talkers and book recommendations, an exercise that can benefit both the children and the bookstore.

On Monday afternoon, Beach Lane Books publisher Allyn Johnston and author Marla Frazee, a two-time Caldecott Honor medalist, presented the well-received featured talk “Creating a Picture Book.” The lively duo shared with booksellers how three of Frazee’s titles — A Couple of Boys Have the Best Week Ever, The Farmer and the Clown, and her upcoming Is Mommy? — went from elusive ideas to colorful, printed picture books.

Over their 15-year collaboration, Frazee and Johnston have worked on favorites such as The Farmer and the Clown, the idea for which, at the beginning, “was so ethereal I was afraid I was going to lose it,” said Frazee. Though wordless, the book went through their usual editorial process, with Johnston providing suggestions for Frazee’s watercolor artwork as well as sending unique clown toys and sculptures to the illustrator as she worked through the spreads.

Is Mommy? was an idea that the pair revisited multiple times over the years before sitting down to turn it into a picture book. “I didn’t think it was possible to illustrate it,” said Frazee, as the simple manuscript tackled a child’s idea of a mean, ugly, messy mother. The end result, which will publish in September, is whimsical, bright, and funny. “It was sort of a miracle,” said Frazee.

On Monday afternoon, booksellers took the sunny, half-mile stroll to Vroman’s Bookstore for an education session on buying and merchandising non-book items, followed by a tour of the two-level store. Vroman’s staffers greeted booksellers as they checked out the offerings in the children’s section, made note of special non-book items and brands, and enjoyed tea, lemonade, and conversation.

The excitement of the more than 140 booksellers who were new to the Children’s Institute was particularly evident at the bustling reception. Amanda Bruns, the children’s specialist at Community Bookstore in Brooklyn, New York, was delighted by the thoughtful booksellers she met throughout the first day of programming. “I appreciate Ci3’s refreshing focus on diversity in children’s lit, and I head home mulling over sessions about creating book subscriptions and wooing reluctant readers,” Bruns said. “Happily, galley-hauling fatigue may also ensue.”

Following Tuesday morning’s breakfast featuring book presentations from the Children’s Institute’s half sponsors, Kristen McLean, the former executive director of the Association of Booksellers for Children and now founder and CEO of data and analytics company Bookigee, shared new insights into the growing children’s book market based on statistics from the 2014 “Nielsen Annual Children’s Book Industry Report.”

The growth of independent booksellers in the market is also notable, said McLean, with 2,094 bookstores operating in 2014 compared to 1,651 in 2009. “You guys are really the bright, shining beacon in the book market,” she concluded. Through May 5, McLean’s slideshow presentation is available to ABA members on BookWeb (a username and password are required).

Author Jewell Parker Rhodes brought Children’s Institute to an end on Tuesday afternoon with a powerful closing keynote on diversity, which elicited a standing ovation. “I grew up feeling less than,” Rhodes began, and shared her experience of coming of age in a ghetto on the north side of Pittsburgh and nearly missing her calling as a writer because she did not see herself reflected on book covers, as either a character or as an author.

“Diversity isn’t about political correctness, nor is diversity a passing fashion, rather it is a significant struggle to see if America can fulfill its civil rights promises of inclusivity, of life, liberty, and the pursuit of happiness. America’s story isn’t done,” said Rhodes. “Freedom comes from empowered voices advocating for justice. And by handing a book to a child, each of you is influencing our country’s future.”

Children’s literature should share everyone’s narrative, said Rhodes, through stories that mirror the many different heritages and cultures that people come from. “No one need feel less than because we are all included, not excluded, and everyone’s narrative is equally important as anyone else’s,” Rhodes concluded. “And the more narrative threads we add — the more rainbow threads, the diverse threads — the more American we become.”

Stay tuned to Bookselling This Week for upcoming coverage of educational sessions from the Children’s Institute, plus a full piece on Rhodes’ closing keynote.