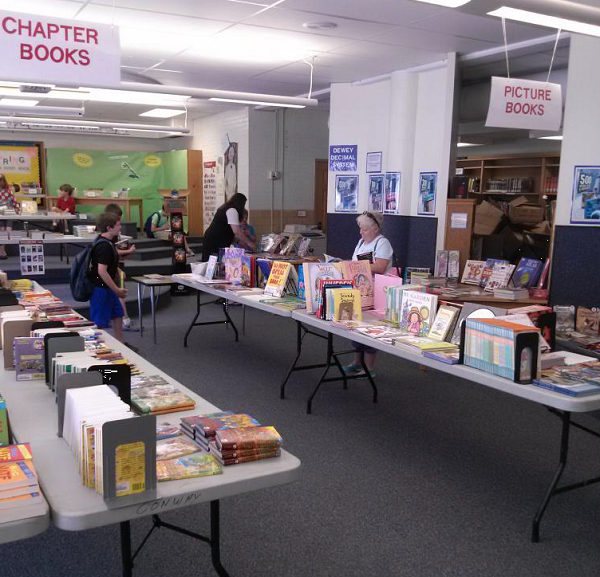 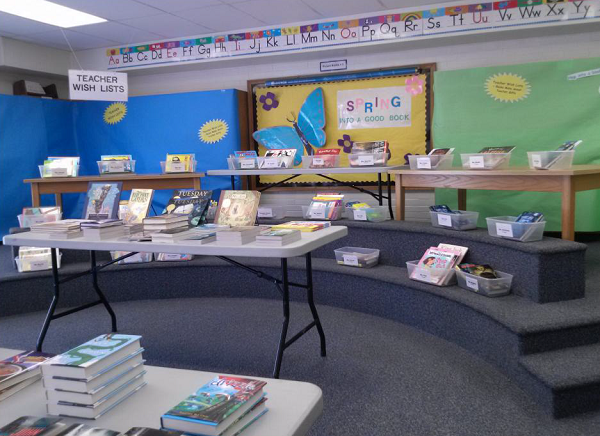 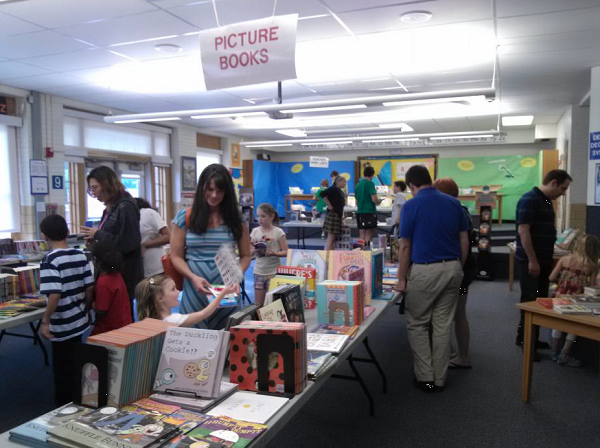 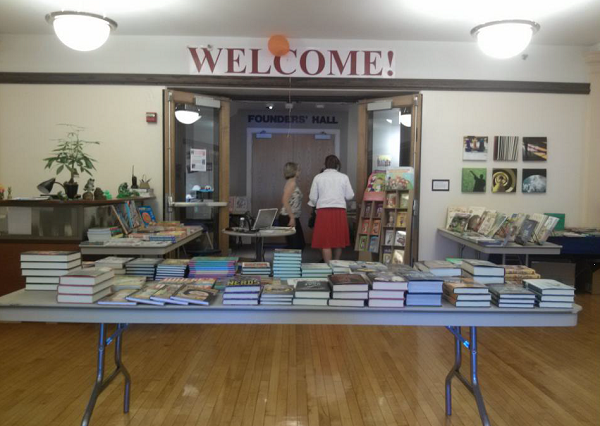 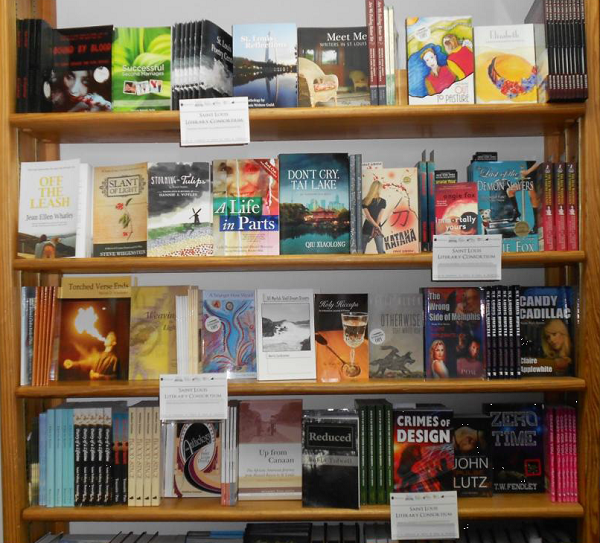 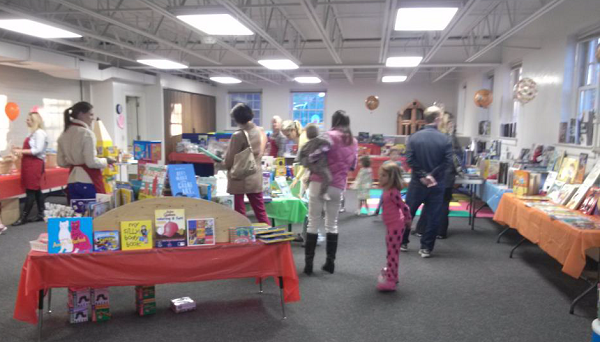 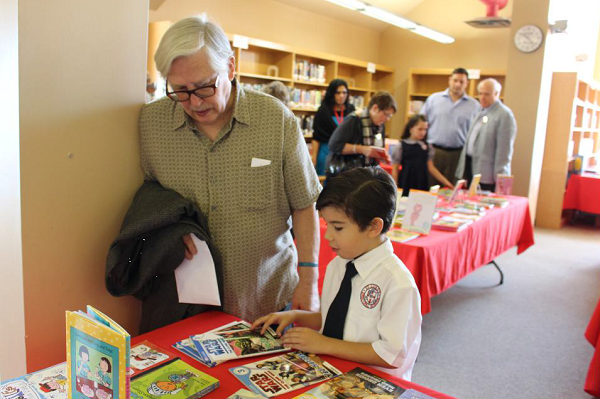 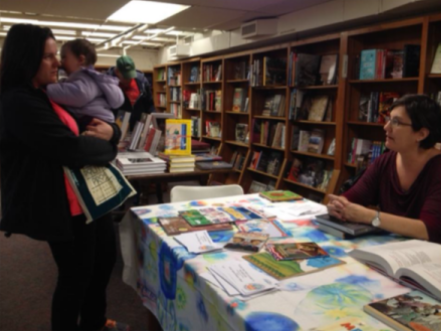 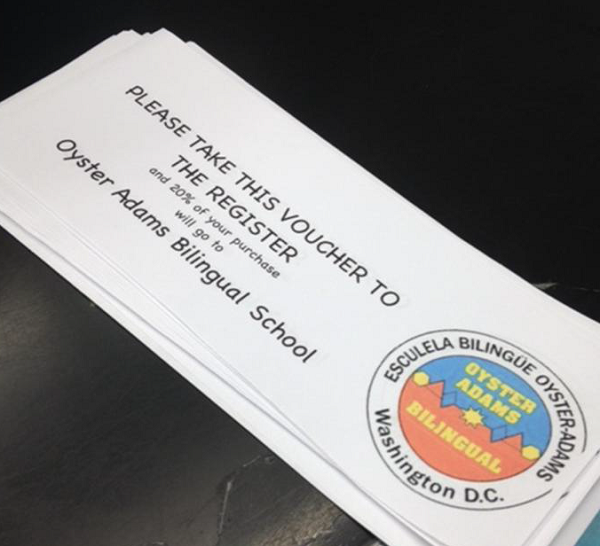 Since 2000, Politics & Prose has been hosting book fairs in the store and now welcomes approximately 20 private schools and 15 public schools each year for one-day sales. “We do a book fair just about every weekend of the school year,” said Powell. Participating schools raise funds — 20 percent of sales made during the fair — and receive donations of books purchased by school supporters and the community.

Politics & Prose establishes a firm timetable for coordinating its book fairs. “About six to eight weeks before the fair we have a guidelines meeting” with the school’s book fair coordinator and any teachers or librarians who are involved in the event, said Powell. “Even if they’ve done this many times in the past, we still require the guidelines meeting.” The bookstore provides attendees with a guidelines packet that explains all details and expectations about the event and reviews it in detail with them.

One store staff person is dedicated to coordinating the fair at Politics & Prose, including scheduling, meeting with the school fair chair, and making sure all items are ready for the event, but for large fairs, Powell will designate an extra staff person to help on the day of the event, in addition to the volunteers provided by the school.

Ahead of the fair, the school’s fair coordinator will create “wish cards” for titles from the store’s current inventory to put on display alongside the books so that community members who come into the store know what books are desired for teacher classrooms and the school’s library. “Wish list” picks are purchased at full price by the customer and are donated to the school, which also receives 20 percent on those sales.

Book fair supporters visiting Politics & Prose during the fair can purchase any title in stock and during checkout show a coupon provided by the school that indicates the school that will be receiving a portion of the book’s sale. To track book fair sales for the store and the school, an extra receipt is printed at the counter and stapled to the coupon.

Left Bank Books, which has two locations in St. Louis, currently focuses on in-store book fairs. Participating schools are offered 20 percent of fair sales as store credit or 15 percent via check. At one time, the store hosted large, in-school fairs, the largest of which grossed nearly $30,000 in sales over three days, but “we found that was not cost-effective because we were stocking a third store just for three days,” said Holt. “And it’s a lot of stress on the credit limit, a lot of stress on the staff.”

For the in-store fairs, the school book fair coordinator creates a wish list of titles that Left Bank special-orders for the school. Anything not donated to the school from its wish list must be bought by the school, and the amount is deducted from the credit that the school earns. In order for the school to receive credit during the fair, customers will mention the fair when checking out, and all sales are rung through a specific book fair account associated with the school in the store’s POS system in order to track the sales.

During its in-store fairs, Left Bank Books will occasionally host special events relating to the book fairs to drum up visitors, said Holt, though “it’s really whatever the school partner wants to contribute.” Some schools will invite students to do book report presentations to bring more customers in or will have musical performances by students in the store.

The Twig Book Shop has found in-school fairs to be the most practical and currently works with preschool and middle grade parochial and private schools to do up to 15 weeklong fairs each year that offer 20 percent back on sales. Mary Milligan of St. Luke’s Episcopal School, who has coordinated book fairs in her school and in bookstores and works closely with The Twig, noted that the clientele of private schools like the personal touch of independent bookstores.

“What we’re trying to do at our school is develop a culture of reading,” said Milligan, adding that independent stores appreciate the desire to instill lifelong learning in children and they send educated, knowledgeable staff to the fairs to work with the customers. “It becomes a community event,” she said.

When developing the inventory for the fair, The Twig’s Maceo communicates with the school librarian about the particular culture of the school to help create a custom list of books. “Working with the librarians on that is so important,” she said. “And that’s our advantage. We can do that,” as an independent store. The Twig works with teachers to create wish lists, and customers at the fair can not only buy a book for themselves and secure 20 percent back for the school, but they can also purchase a book to donate to a teacher’s classroom or to the school library. Maceo said that she avoids doing similar events, like preschool book fairs, back-to-back so that there is time to replenish inventory before each fair.

For The Twig, “off-site is worth the effort,” said Maceo, but it’s important to have the details worked out. A dedicated bookstore staff member coordinates the fair, and on the day of the event takes laptops armed with the store’s POS system, a credit card machine, and a cash box to handle all transactions. A list of all items headed to the fair is kept to ensure proper return, and the event is always held in a room that can be locked and secured during off-hours. Volunteers from the host school are welcomed at The Twig’s in-school events, helping with setting up, stocking, and hand-selling, though not with transactions.

Milligan has found that the best timeline for a fair at St. Luke’s is four days. Milligan has volunteers help set up when the books arrive on a Monday, which builds anticipation throughout the day for a Tuesday opening. The fair then runs through mid-day on Friday. “If it’s too long, people procrastinate a little bit too much — it really disrupts the schedule. Too short, people don’t make it down,” said Milligan, who noted that author visits can help with the turnout at a book fair, but at St. Luke’s “the thing that is really the most successful is Grandparents’ Day.”

When Left Bank has hosted in-school fairs, Holt found that they needed to give parents the opportunity to remember their wallets, she said, “so the shortest amount of time you should be there is before school and after school on the same day.” Parent Teacher Association conferences or pajama party movie nights can also boost participation in the book fair. “If there’s something else that’s getting kids excited and talking, the more likely they are to remember that there’s a special event going on at school.”

The three bookstores have also experimented with non-traditional types of fairs, including online fairs and fairs with minimal stock.

For one preschool book fair, The Twig brought one copy of each featured title and set up a virtual catalog for customers to order additional copies. “They ordered because they could still hold those books, look at them, and read them aloud,” said Maceo. Teachers and volunteers took orders at the event and parents were able to go to the school library for a full week afterward to continue placing orders. The Twig ordered the books from the publisher once the fair closed, and used its point-of-sale system to record all of the orders.

Politics & Prose held a similar event at a local preschool. The school purchased one copy of each book they wanted to feature, and parents and school supporters visited the library to see the books and place orders via an order form. Once the event was finished the school added the books it had purchased to its library shelves.

Left Bank hosts online book fairs for parents who shop online or grandparents and relatives who don’t live nearby. The online component, which features a wish list for teachers, is in a specially created section on the store website. The online fair opens a week before the in-school book fair and stays online a week after it concludes. Left Bank has also hosted an online-only fair during PTA meetings at which the school librarian will set up computers displaying Left Bank’s book fair website. Holt offers the same 20 percent credit and 15 percent cash discount back to the school and uses a coupon code associated with the fair to track sales and raised funds.

Many schools and community organizations coordinating a book fair fundraiser seek to partner with local, independent bookstores, which bring a carefully curated variety of books and exceptional staff knowledge of titles to these events. Hosting a book fair, whether in a bookstore or in a school, requires special attention and energy, but as booksellers continue to venture into new avenues for sales, book fairs remain a way to build strong community ties and to identify new customers with each event.

To learn more about book fairs, check out ABA’s Organizing and Running Book Fairs, and stay tuned to Bookselling This Week for news about the availability of education session videos, made possible by a grant from author James Patterson.