A session at this month’s ABC Children’s Institute provided booksellers with a comprehensive look at child development and the various types of books that foster early learning and literacy. The session featured Dr. Susan Keehn, graduate professor in early literacy at the University of Texas in San Antonio, a former elementary school teacher, and an International Reading Association-recognized Outstanding Teacher Educator; and Tess Riesmeyer, young readers coordinator at Penguin Bookshop in Sewickley, Pennsylvania, and a children’s literature instructor at the University of Pittsburgh. 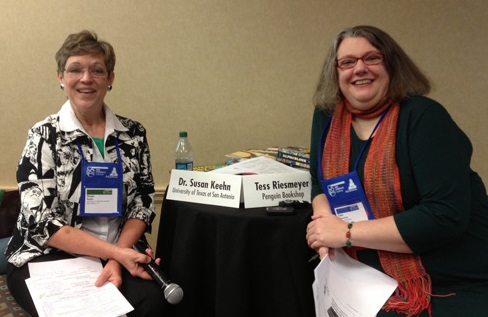 Keehn began the session, “Graduate Level Education on Child Development & Literacy,” by naming the four most important aspects of teaching children to read: oral language, which is the foundation of all literacy that follows; storytime reading, which introduces children to the narrative structure that is key to developing conversation skills; phonological awareness, or promoting a child’s ability to manipulate the sounds within words; and the alphabet, the basis of all written language. Keehn said it’s important for booksellers to keep each of these in mind when helping a parent or teacher find a book that matches a child’s developmental level or need.

“We need to ask, what kind of text will scaffold the child at his or her particular stage of development?” said Keehn.

Keehn and Riesmeyer both strongly believe that alphabet books are an important aspect of learning that is often overlooked for children who already know the alphabet. “We don’t want to let parents dismiss it,” said Keehn. “There is a wealth of richness in alphabet books to push them a little further. You can find one that’s challenging for every child.”

Riesmeyer said that she generally doesn’t carry alphabet books in board book format as they might minimize the content or put pressure on parents to teach a very young child the alphabet. However, Alpha Block by Christopher Franceschelli (Abrams) is a title that proved to be an exception, she said.

“One aspect I really love is that when you turn one page, the next page pops up. So that little fingers really are able to look at it,” Riesmeyer said. “It really is a great vehicle for conversation about everyday objects.” She also likes Denise Fleming’s Alphabet Under Construction (Square Fish) for its story, and often reads it during storytime. This, she said, demonstrates to parents that she is focusing on the story and not using it to drill the alphabet.

Regarding phonological awareness, Keehn said research shows that children start responding to rhyme at 18 months. “When we think about literacy, children have to be able to work with language abstractly,” she said. “It is a huge cognitive leap, especially for children who have not been exposed to language play. Children need to have experience with manipulating sounds.”

For customers shopping for a child around the age of 18 months, titles that contain rhyme are especially appropriate. For parents, booksellers, educators, and others who want to learn more on the subject, Keehn recommended Michael F. Opitz’s Rhymes & Reasons: Literature and Language Play for Phonological Awareness (Heinemann). It is a valuable resource, she said, because it’s annotated with specific titles, their level of difficulty, and corresponding activity ideas.

Among the wealth of titles with rhyming components, Keehn said, are Debbie Harter and Fred Penner’s The Animal Boogie (Barefoot Books) and The Snail and the Whale, by Julia Donaldson and Axel Scheffier (Puffin).

Parents often need guidance on how to incorporate talk into storytime, she added, but there are many titles intended for young children that promote talk and extend language. Among them are A Good Day, by Kevin Henkes (Greenwillow Books), and Borreguita and Coyote, by Verna Aardema and Petra Mathers (Dragonfly Books), which Keehn said “addresses these skills in ways that are authentic.” Riesmeyer suggested Bonny Becker’s A Visitor for Bear (Candlewick), which she read at a recent storytime, and said, “It was such fun having these two-year-olds guessing and giggling over where they think the mouse is going to pop out next.”

Riesmeyer noted the emergence of many compelling nonfiction titles, which can often engage reluctant readers by tapping into a specific interest. The demand for nonfiction titles in the classroom is an outgrowth of the Common Core State Standards, said Keehn, while the increasing quality of these titles is likely a result of the attention given to them by such professional organizations as the National Science Teachers Organization and the National Council for Teachers of English.

About the role of e-books in language development, the research base is still in the early stages, said Keehn, “and we know there are still a lot of questions to be answered.” However, some early findings have noted that e-books are motivational for reluctant readers and that technology can help strengthen vocabulary and pronunciations for second language learners.

On the negative side, e-books are seen as distracting, and there is concern that children will rely too heavily on technological aids.

While more research needs to be done on the topic, “it’s inevitable,” Keehn said. “E-books are going to be part of a child’s literacy life.”

In terms of merchandising, Keehn offered several suggestions to help booksellers match a customer with a developmentally appropriate children’s title.

To help customers recognize the literacy skills that many books help develop, Keehn suggested grouping titles together in the store based on the category, such as alphabet, phonological awareness, and vocabulary. Riesmeyer suggested creating special displays that explain each concept, which would be beneficial to both customers and store staff. “Throw a little science in there,” she said. “It’s helpful to parents when they hear those official words.”

Additionally, Keehn said it is important for parents to read to their children at a level that is at least two grades higher than the child’s current level. This has the added benefit of boosting sales, as booksellers can recommend one book for the child to read, and one at a higher level for the parent to read to the child.

“The bottom line is that we have to pair children with the book that meets their needs,” said Keehn.

A handout that lists all children’s book titles mentioned during this session was given to attendees and is now available to ABA members on BookWeb.