Independent booksellers across the country have chosen We Begin at the End by Chris Whitaker (Henry Holt and Co.) as their top pick for the March 2021 Indie Next List. 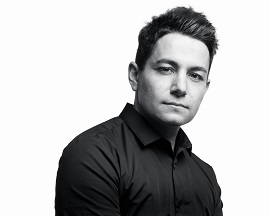 We Begin at the End picks up 30 years after Walk turned Vincent, his best friend, in for a crime that left their coastal California town reeling. Despite Walk’s best efforts, Star, Vincent’s former love, has spent the last three decades spiraling into self-destruction, leaving 13-year-old Duchess, her daughter, to care for not only her mother, but her five-year-old brother, Robin, too.

When Vincent is released from prison, tragedy strikes again, and both Duchess and Walk must learn how to cope with trauma, prevail over their circumstances, and create families stronger than the ones they were born into.

“We Begin at the End is dramatic storytelling at its best, full of layers of intrigue and complex personalities set around the murder of the book’s most vulnerable character,” said Robin Sung of Porter Square Books in Cambridge, Massachusetts. “The stoical, 13-year-old Duchess Day Radley takes center stage, and her heartbreaking life unleashes a hero within: self-proclaimed outlaw, bold and courageous, though to her peril not always wise beyond her years. Chris Whitaker has created a character for the ages and an extraordinary reading experience. By turns amusing, frightening, and exhilarating.”

Chris Whitaker is the award-winning author of Tall Oaks and All the Wicked Girls. He lives in the United Kingdom with his wife and three children.

Chris Whitaker: There’s a strange story behind it. I was mugged when I was a teenager, and then stabbed. It was a really traumatic incident and I didn’t tell anyone afterwards — I was having such a difficult time. I read about this therapy technique, where you take what happened, the traumatic incident, and you write it down and change the characters involved. And I wrote Duchess all those years ago. I wrote about this girl that was 15 miles away from my life, and she was very fragile, but tough deep down. So, it began then, and I revisited the character for the next decade. I kept picking it up and writing bits and pieces and deleting bits, and then it was only when I met Amy, my editor, that I really got into the book and decided to finish it.

BTW: How did you find developing Duchess’ character for this book?

CW: It was hell! It was really difficult, actually. It took a long, long time. When I start writing, I start with a strong visual image, and when I started this, I had this image of a little girl wearing a Stetson and holding a gun and looking for revenge without knowing what revenge even means, or how to get it. And then after that, she evolved. It was really after the first draft that I got to know her character, and then I went back and restarted it because how she was at the end wasn’t how she was at the beginning. I don’t just mean that she’d grown as a character — I got to know her better, how she would react in any given situation. So, it was working and reworking. I spent probably a year just on Duchess’ dialogue and making sure it felt right. I’m a strong believer in that gut feeling, and that you should enjoy it for the most part. I think that gets lost sometimes, that you do it because you love it. Sometimes it does feel stressful, but I think it should be difficult. It’s not easy to write a book.

BTW: And what about Walk?

CW: So, there’s a traumatic event that starts the book off — the death of a child when Walk is 15. At the time, he’s blissfully happy in his bubble, he’s got his best friend and he’s got a girlfriend, and he doesn’t really move on. The story picks up 30 years later and he’s still stuck. He’s never really matured or grown up. He’s still wide-eyed and innocent and everything good in the story. I needed this anchor for Duchess because she has no roots, no strong male role model. And she finds that in Walk. She’s reluctant and doesn’t want to see it, but I think as you read the story you realize how much she does need him. As for Walk himself, he evolved into the person that I aspire to be. He sees the good in everyone and he’s not cynical, although that does change over the course of the story.

BTW: Why put their viewpoints side by side?

CW: I think they need each other. I wanted to write two characters that seem to be polar opposites, but are bonded by this traumatic event. For Duchess, obviously, it happened a long time before she was born, but still casts a shadow over everything she does and the town that she lives in as well as her mom, who can’t move on from it. And then I needed this connection between the two of them. Duchess spends part of the book researching her family tree, and she needs to know where she came from, but she can’t find that out. She doesn’t know who her father is. And Walk is as close to a father figure as she gets in this story. He’ll tell her if she did something wrong. He’s not hard enough on her because Duchess’ mother is one of his closest friends...and I think he struggles with the discipline side of it, when that’s probably what she needs.

BTW: At the core of this story is Walk’s friendship with Vincent King, who is just released from prison after 30 years. What was it like writing the shared history between two deeply estranged friends?

CW: That plays into Walk pressing freeze on his life when he was 15. He assumes because he’s mostly stayed the same, that everyone around him will. And it kind of reflects in the town — the town is changing, and he hates it. Businesses are going under and they desperately need the money but he fights against it. He’ll let it go to ruin just so he can preserve this idyllic memory that might not be that accurate. There’s a point where Martha, Walk’s love interest, is talking about back when they were teenagers and mentions how Vincent used to cheat on girls and they got into a lot of trouble. But, when it’s Walk’s narrative, you see it as kids just messing around and having fun. From someone else’s narrative, Vincent can appear completely different. I think Walk is just so desperate to fix everyone that he’ll ignore the signs that Vincent maybe isn’t who he thought he was. It’s completely naive and ridiculous to think that three decades in prison won’t change a person, but Walk just expects to pick up right when Vincent gets out. And Vincent is clearly damaged, and it’s taken a toll, and he’s not the person that Walk remembers.

CW: I kind of drowned myself in research. I looked into foster care and I looked into criminal proceedings and court cases and prison life and I ended up with so much information I had to pare it back a bit and remember that I’m telling a story and it’s not an information dump. It’s unique to me, Duchess’ story, and it doesn’t apply to everyone else. I didn’t want to get too bogged down in the legal side of it, I didn’t want it to be a legal thriller. I wanted it to be about a girl, and a story with heart, and the court case part was really difficult to write. I started reading some trial manuscripts. I just wanted it to be accurate. That’s where copyeditors saved me.

CW: A huge one — we have a number of amazing independent bookstores near us, and there’s a level of passion for the booksellers that work there. I’ve found so many books that I wouldn’t have read just through bookseller recommendations. You feel a connection, a kindred spirit. I love everything about bookshops. It’s like the library, you feel like you’ve come home the second you walk through the door. There’s something immensely comforting about them.