Ci5: Ilsa Govan on the Effect of Implicit Bias on Hiring for Diversity 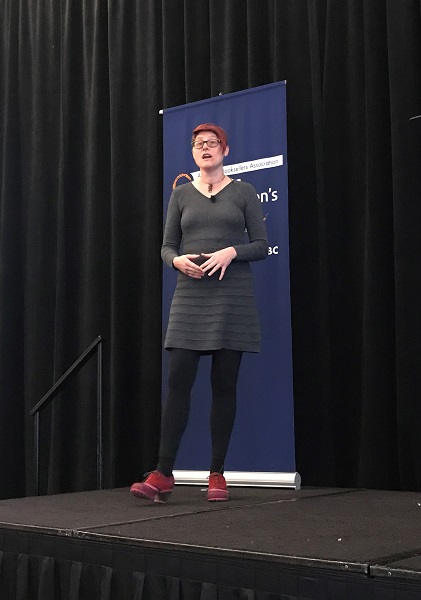 Govan, who has led conversations about racial equity at workshops and conferences across the country, spoke on the topic of implicit bias — subconscious biases that run directly counter to one’s beliefs and values — and the role it plays in the hiring process.

“Part of our creating a workplace that is really welcoming means considering how people can bring their full selves into the workplace and not leave a part of themselves behind,” said Govan, who focused on race during her talk but said that attendees could apply her points to any area of identity.

All of us have a lens through which we perceive the world and the people in it, a lens based on our own experiences, she said. “I have to be cautious about taking experiences that other people have, reinterpreting them through my lens of experience, and then determining whether or not I believe that their experience is valid, rather than understanding that they probably understand their experience better than I do,” said Govan.

From the time you learn to read, you learn that the word red is paired with the color red — what researchers call a “mind bug” — and the same thing happens to us with stereotypes, so one must consciously activate their system of thinking to avoid stereotyping, Govan said.

Job candidates of color are subject to name-based racial discrimination, meaning a woman named Aisha has less likelihood of being called back compared to a woman named Kristen, despite identical resumes, said Govan. When candidates of color take out markers of race from their resumes, they are more likely to be called back, which leads to “resume whitening” by those candidates in order to get their foot in the door.

Candidates of color were less likely to whiten their resumes when submitting to a company that said in its job listing that it valued diversity; however, in regard to those companies, 25 percent of African Americans received a callback when they whitened their names and just 10 percent were called back when they kept their names; 21 percent of Asians applying received a callback with a whitened name, and 11.5 percent when their name was unchanged.

“Our implicit association is getting in the way even when we’re the people who are saying that we value diversity,” said Govan. To avoid implicit bias, employers should find ways to take those markers off of resumes before the screening process begins.

For bookstores that may hire infrequently, it’s important to maximize the opportunities to create a more diverse workforce, said Govan, and to make sure from the start of the screening process that candidates from diverse backgrounds are not being cut out.

When hiring, it’s also important to acknowledge differences in individuals and groups, and to avoid colorblind ideology and stereotype suppression. Growing up, many of us were guided to treat all people the same and to not notice color, said Govan, but she stressed that those who say they do not see color are in fact not acknowledging someone’s personal experiences.

“When I try to suppress my stereotypes, they’re more likely to show up because I’m now using mental energy to suppress stereotypes rather than using mental energy to notice your difference and not treat you in a negative way,” she said. “Why is it that we can’t notice difference and still treat people the same way? Why do we have to not notice difference in order to treat people fairly and equitably?”

We all make assumptions and apply stereotypes to people, but the problem arises when we are unaware that we’re stereotyping someone, said Govan. Prime your brain when meeting someone new, she suggested: think about who this new person reminds you of, what positive or negative experiences you’ve had in the past with people who look like this, and what assumptions you are making about the person they remind you of. “If I’m doing that, then I’m actively thinking and actively countering those stereotypes — priming my brain to give a more equitable interview,” said Govan.

Govan asked attendees to think about 10 people in their lives who they truly trust, then to think about their age, race, religion, class, gender, and sexual orientation. “What are you noticing about your 10 most trusted? Do they tend to be people who are similar to you?” she asked. “This is where we have to really be conscious of our bias.” We all have the desire to hire someone who reminds us of someone we enjoyed working with or spending time with, Govan noted, but that can create a restrictive picture of whom we want to hire before we begin the hiring process.

It’s also important to seek out counter-narratives and positive media to see messages directly opposite to the stereotypes that exist in our society. For example, Mahzarin Banaji, the author of Blindspot: Hidden Biases of Good People (Bantam), keeps images on her computer desktop of counter-narratives. “Think about when people walk into your bookstores, are they seeing counter-narratives?” asked Govan.

Establishing the criteria for a new hire can also help to avoid biases during the interview process. Think about how candidates will be chosen and have everyone on the interview team consider the questions to ask interviewees and the ideal responses. “Post those criteria so that you can continually go back to the criteria and check yourself throughout the process,” she said.

During these conversations, stay engaged and listen to understand, rather than attacking or avoiding the other person, said Govan. Speak from the place of “I,” not “we,” to acknowledge that people come from different experiences and perspectives, she added, and ask questions of those you’re talking to in order to better understand their experiences.

Govan said she strives to take risks with these conversations and to speak the truth so that people don’t have to be subject to implicit biases; when considering why it’s important to take those risks, lately she’s been thinking about the Civil Rights Movement, she said.

“People literally gave up their lives for civil rights, for equity and justice. I would not be standing here talking about this if not for those whose shoulders I stand on, who fought and died in this movement. So for me to engage in a conversation with you where I might feel uncomfortable feels like a very small risk to take compared to those who gave their lives,” Govan said.