Ci6 Education: “Beyond the Bookstore: The Bigger Picture of Bookselling and How to Get Involved”

Booksellers who are active within their local regional trade organizations served on a panel at the American Booksellers Association’s sixth ABC Children’s Institute in New Orleans to discuss the different ways it is possible to engage with the bookselling community that exists beyond their individual store.

The session, titled “Beyond the Bookstore: The Bigger Picture of Bookselling and How to Get Involved” was moderated by Valerie Koehler, owner of Blue Willow Bookshop in Houston, Texas. The panelists were Amy Thomas, owner of Pegasus Books in Berkeley and Oakland, California; Drew Sieplinga, events coordinator at Wild Rumpus Books in Minneapolis, Minnesota; and Clarissa Murphy, bookseller at MIT Press Bookstore in Cambridge, Massachusetts.

Koehler started the session by asking each of the panelists why they say “yes” — yes to going above and beyond their work as booksellers by serving on different boards and councils and traveling to such conferences as the ABC Children’s Institute. Besides gaining access to the valuable educational material shared at these conferences, the booksellers agreed that the events provide the added perk of networking with like-minded individuals who can offer not only the tips and tricks of the trade, but companionship as well.

Thomas shared that when she first began working in a bookstore, her boss was unwilling to extend his work beyond the storefront. But Thomas wanted to make changes.

“I really wanted to introduce a new kids’ books section,” Thomas said. “And I was lonely. I didn’t know how to go about that. I found a camaraderie [with] people willing to tell me how they do it...it went on from there.”

Murphy noted that she makes an effort to attend most of the educational and networking opportunities her regional organizations and ABA offer, even if it means giving up a little bit of her free time. 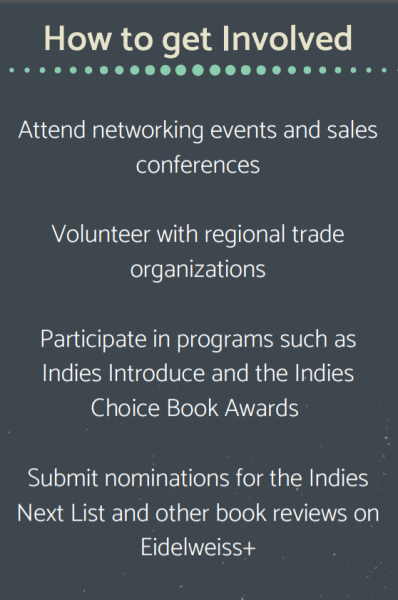 “As a young bookseller in Boston, that’s how I meet everyone,” she said. “That’s how I become more embedded within this community.”

For Sieplinga, simply learning how to improve the bookstore she worked at was a motivating factor.

“I realized very quickly that the more I volunteered for things and expressed interest, the more I was learning,” she said. “I was meeting people and getting new ideas that I could bring back to the store, for the benefit of our own store as well as the whole organization.”

The panelists, as well as the session’s moderator, noted that the first step to getting involved is to start small.

“One of the first places to start is at our regionals,” Koehler said. “We are all members of our own regionals and have served [on the board] at different capacities…Signing up and being a part of a group is how you meet and learn from people.”

Sieplinga, who began volunteering by recommending books and writing blurbs for MIBA’s Midwest Bestseller List, reminded booksellers that everyone has something valuable to bring to the table, which is why it is so important to volunteer.

“Reaching out to the executive director or somebody else at the organization is the first step,” said Sieplinga. “If you have unique skills, tell them what you have to offer.”

Another appeal of getting involved “beyond the bookstore” is social and industry-based activism; becoming a member and serving on the board of your local regional association gives booksellers the opportunity to make a difference.

Thomas shared how NCIBA led the charge when it came to including the word “independent” in their regional association’s acronym, which, she said, wasn’t a popular decision at the time. This kind of innovation regionally had an impact on a national level. As an example, Thomas noted NCIBA’s work in developing Book Sense, which evolved into IndieBound.

Thomas stressed that being involved in the larger bookselling community has also helped independent bookstores combat the threat of collapse: “We regrouped...because of this activism. I think we brought [the industry] back from the cliff.”

Booksellers can also use regional and national conferences not only to express their passion for the industry, but to speak on the issues they care deeply about.

“I noticed how the disability community can really be left by the wayside,” said Sieplinga. “I just felt like I wanted to advocate...to be more inclusive,” and MIBA gave her that platform.

Murphy added that “it is by being involved that you can advocate for those things...these changes come from people being involved,” which means putting in the effort and extra time to review different policies and actions that regional organizations and ABA are considering.

Some booksellers might face difficulty in attending community-wide conferences for a variety of reasons, such as being unable to afford the cost of travel, but both regional trade associations and ABA offer potential solutions in the form of scholarships, and some individual stores also try to offer financial assistance. Koehler noted that Blue Willow offers the Verner Barnes Memorial Scholarship: $500 awarded to one first-time attendee of the MPIBA Fall Discovery Show.

For those who work in stores that might not be active in their regional trade organizations, Murphy urged booksellers to express their interest to their employer.

“I would encourage you to open up that door with your boss,” Murphy said. “A lot of the time you find that they want you to go and bring things back. Make sure you bring things back. When you get home, type a quick email up to your boss and say, 'These were the three best things I heard.’”

“Every time I come back from [an event] I have a meeting and debrief my boss and the other managers,” Sieplinga said; she also makes sure to bring along a set of organized, printed notes with concrete ideas.

Other ways for booksellers to become more involved within their own stores include programs like Indies Introduce, which asks booksellers to read from a list of children’s and adult titles for promotional purposes.

“I did [Indies Introduce] one time and I would do it every single time if I could,” Murphy said. “You meet wonderful people, you learn about new authors...It pushed me out of the general boundaries of what I read.”

Another program booksellers can get involved in is the Indies Choice Book Awards/E.B. White Read Aloud Awards. Sieplinga, along with a panel of booksellers from bookstores across the country, participated in selecting children’s and adult titles to be presented as nominations for each award.

“You work together as a panel to narrow down the categories,” said Sieplinga, who added that getting involved is easy. “You just have to express your interest.”

Edelweiss+ is another option, which lets booksellers post book reviews that can then be sent to publishers and submitted to the Indie Next List. “If you do submit to a publisher, people are looking, people are reading that,” said Murphy. “The more you put your name out there, the more people will start to recognize you.”

Regardless of how booksellers want to get involved, all four panelists agreed that the most important thing to do is to speak up. Regional organizations and ABA are always looking for store owners, managers, buyers, and frontline booksellers to volunteer.

“By joining these [organizations] we are able to affect more rapid diversification of this industry,” Thomas said. “Your voice is not only asked for but listened to.”

“There’s really not another kind of trade association [like ABA],” added Koehler. “The collegiality of the people, the sharing of ideas, the amount of work that goes into putting on these institutes. I dare say that if you owned a dress shop, there would not be quite the place to get that.”