Chelsea Clinton appeared in conversation with Lissa Muscatine, co-owner of Politics and Prose Bookstore in Washington, D.C., during a breakfast keynote at the American Booksellers Association’s sixth ABC Children’s Institute in New Orleans. 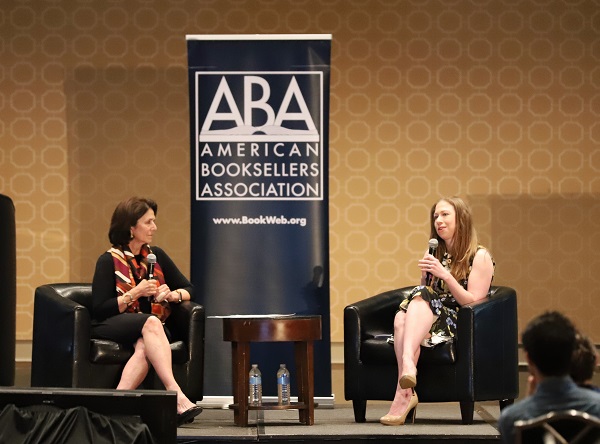 The daughter of former President Bill Clinton and 2016 presidential contender Hillary Clinton, Chelsea Clinton is the author of the number-one New York Times bestselling picture book She Persisted: 13 American Women Who Changed the World, which received a starred review from Publishers Weekly, and She Persisted Around the World: 13 Women Who Changed History (both Philomel). Clinton is also the author of the New York Times bestselling It’s Your World: Get Informed, Get Inspired & Get Going! (Puffin Books) and, with Devi Sridhar, Governing Global Health: Who Runs the World and Why? (Oxford University Press).

On October 2, Clinton, who serves as the vice chair of the Clinton Foundation, where her initiatives include helping to empower the next generation of leaders, will publish Start Now! You Can Make a Difference (Philomel), a middle-grade title for young activists.

Muscatine is the owner of Politics and Prose with her husband, ABA Board member Bradley Graham. A former Washington Post reporter and White House speech writer during the Clinton administration, Muscatine is currently writing Hillaryland, her story about working with Hillary Clinton, to be published by Penguin Press.

At the Thursday, June 21, breakfast, following Muscatine’s introduction, Clinton thanked booksellers in the audience, some of whom she recognized from her previous book tours. “I’m so grateful to all of you because without your support and partnership, I wouldn’t be able to have the reach that I hope to have with the work that I feel called to do and the obligation that I feel to children in our country,” she said.

The first time the two met was when Muscatine worked for Hillary Clinton; Chelsea Clinton was just 13 years old and living in the White House. At the time, Muscatine received some impassioned advice from Hillary on raising her kids to be readers: “Your mother was fierce, relentless, incessantly reminding me to read to my children — constantly. She badgered us and others who had children along with me in the White House; she would constantly be sending us books and CDs…Not that I wouldn’t have [read to my kids], but it was so important for me to hear it from her. So I was wondering, when you had Charlotte, did she do the same thing to you?”

Chelsea Clinton’s daughter, Charlotte, is now three years old, and her son, Aidan, is two. She said her mother inculcated her with the same message about the importance of reading to kids and making sure they grow up in a language-rich environment.

“I do think that the stories we tell our children are profoundly important for how we help them either expand or limit their world and how they think about their own possibilities within our world and our shared future,” Clinton said.

Bill and Hillary Clinton are known by the public for being voracious readers, said Muscatine, and when she was in the White House, Hillary Clinton strongly supported and advocated on behalf of literacy programs like Prescription for Reading and Reach Out and Read. Looking back on her past as a young reader growing up in that household in Arkansas, Chelsea Clinton recalled buying Nancy Drew books at the local mall and visiting the Little Rock Public Library after church to pick up a new stack of reading material. At the library, Clinton said, she “discovered the characters, both nonfiction and fiction, that resonated with me and further helped me find myself, but I’m sure it’s connected to how I found my voice now as an author.”

Chelsea Clinton wrote her first book, It’s Our World, to equip kids with the knowledge they needed to get involved in their community and make change; it’s the book, she said, that she would have wanted to read at age 11. To write it, Clinton said she spent a lot of time meeting with young people and listening to them talk about the issues they cared about, and even had them read drafts of the chapters. Clinton told booksellers that her forthcoming book on activism, Start Now!, is more appropriate for younger readers, and includes chapters on allyship, health, endangered animals, and kindness, including to the planet.

Clinton said she was first inspired to write She Persisted last January when Elizabeth Warren, the senator from Massachusetts, attempted to read a letter from civil rights figure Coretta Scott King during Attorney General Jeff Sessions’ confirmation hearing. Warren was censured by Republicans and prevented from reading the letter in to the record; when Senate Majority Leader Mitch McConnell described the incident afterward, he stated that Warren would not stop her reading of the letter when reprimanded. McConnell’s words in the aftermath gave birth to what has become an indelible phrase for feminists and other activists: “Nevertheless, she persisted.”

“She Persisted was very much borne out of a moment last year when I was trying to think about how to explain to my own children how often our country has been driven forward by women who refuse to do anything but persist on behalf of social justice, equal rights, in the arts, the sciences, athletics, and so much more,” Clinton said.

The women in the first volume of She Persisted were Americans who had long been personal influences of Clinton’s, including perinatology pioneer Dr. Virginia Apgar, Olympic runner Flo-Jo, and early boundary-breaking journalist Nellie Bly, while the women in She Persisted Around the World, Clinton’s second, more global volume, include Indian doctor Mary Verghese, Canadian civil rights pioneer Viola Desmond, and famous Chinese ballerina Yuan Yuan Tan. Clinton said she found these remarkable women from around the world by soliciting hundreds of suggestions from women she knew who had lived internationally, as well as from professionals across the global Penguin Random House community.

According to Clinton, the first She Persisted book also pays homage to three women who were connected to the catalyst for this moment: Senator Elizabeth Warren, to whom the book is dedicated; Coretta Scott King; and Hillary Clinton, whose portraits all appear in the opening spread.

While she wrote She Persisted and She Persisted Around the World to show young children the importance of persistence against the forces of adversity, Clinton said she is currently feeling overwhelming sadness and anger due to a particular adversity: the Trump administration’s family separation policy. “I’ve been more affected by the ripping of children away from their parents at the border than anything else, period, in a public sense,” she said. “I think it is important that we all feel the moral outrage of this moment.”

Referring to the current caustic political moment, Muscatine asked Clinton to explain how she manages to respond in such a calm, rational way to people who say cruel things to her on Twitter. “Even when people are attacking you in the spirit of the dialogue and discourse that seems to start at the top these days, you always go to the place of tolerance. You always try to get people to search for their better selves, but don’t you just sometimes want to ring their necks?” asked Muscatine.

“Oddly, my life really prepared me for this social media moment and zeitgeist,” answered Clinton. “When I was a kid growing up in Arkansas [when my father was governor], people would say crazy things to me — not infrequently.”

In her teenage years, this went on to include constant digs on her appearance by Saturday Night Live and Rush Limbaugh, and harsh comments from the public and the media still continue today. While she used to believe in ignoring such vitriol, Clinton now thinks a lack of response can be taken as complacency or weakness, allowing the toxicity to fester.

“I do think, particularly at this moment,” added Clinton, “when we have an epidemic of bullying in our schools, in our playgrounds, and everywhere children spend time… those of us who have platforms have to continue to stand up and say, ‘It’s not ok.’ Role model what it looks like to stand up to the vitriol, and role model what allyship looks like, because we can’t only stand up for ourselves — we have to stand up for everyone.”