At an interactive education workshop guided by Glory Edim at this year’s Children’s Institute (Ci7) in Pittsburgh, Pennsylvania, booksellers interested in starting a Well-Read Black Girl (WRBG) Book Club learned different strategies for creating an environment where anyone can feel welcome and empowered due to the diverse representation they see there. 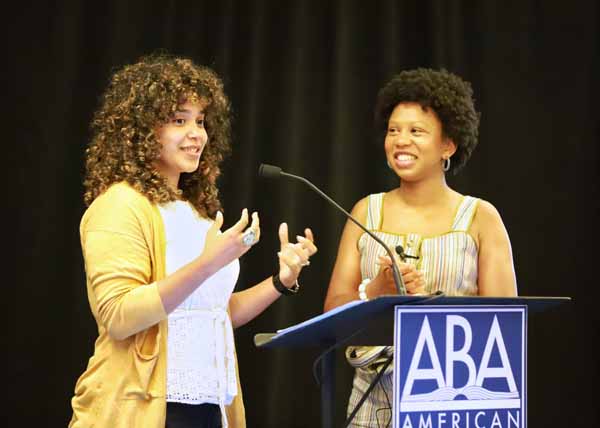 Well-Read Black Girl is the book club and literary festival that provides a space for black female readers and writers to connect in conversation. This year, the American Booksellers Association partnered with Edim to bring book club meetings to independent bookstores with the goal of amplifying diverse voices and supporting emerging writers of color. Booksellers are invited to sign on to serve as ambassadors and host Well-Read Black Girl book clubs in their stores throughout the year.

At the Friday, June 28, session, Deidre Dumpson, operations manager at WORD Bookstore in Jersey City, New Jersey, introduced Edim, who told booksellers that WRBG focuses on readership of selected books by women and non-binary writers of color, with the goal of creating an environment in the host bookstore where anyone who comes in enters a welcoming and affirming space.

“There is so much to be said about community-building, and when it happens on a local level in a bookstore, it is life-changing,” said Edim. “I want young people, or really any person, walking into your bookstore to encounter radical black and brown imagination; I want them to feel uplifted, affirmed, and like they belong and their story can be centered.”

Inevitably, noted Edim, having a more diverse group of readers of different races, genders, abilities, and socioeconomic and cultural backgrounds who feel welcome in your store will spark new and important conversations about difference and biases, and foster closer connections among the community.

Edim read a lot as a child, she said, including books by Judy Blume, the Sweet Valley High series, and The Babysitters Club series, but it was only when she went to Howard University that she encountered all the voices of the African diaspora, such as Maya Angelou, Toni Morrison, and Alice Walker. She learned that being well-read, she said, does not necessarily mean having a fluent understanding of the Western literary canon, but to be able to “walk into any space and feel confident that you can encounter any work of literature, whether it is Walt Whitman or Shakespeare or urban lit or Sistah Souljah, and you belong.”

“There is not one way to define what it means to be well-read,” she said. “I think a lot of times people are thinking of the traditional literary canon, which is wonderful and needed, but which is not the only thing, and this stops these people from experiencing literature and words.” 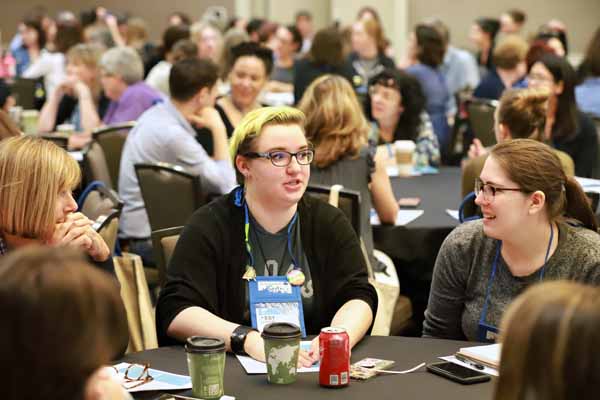 Booksellers converse with one another at the Well-Read Black Girl Workshop at Children's Institute.

The premise of the WRBG book club program is for a bookseller on staff to serve as an ambassador and facilitate the club at the store, or, alternatively, booksellers can try to find someone from the community who is suited to do so. Some bookstores may not have anyone of color working there, so if this is the case, it is best to seek out a talented, enthusiastic community organizer or local book club member and train them to be an ambassador to run their club.

Doing this community work may help booksellers who are worried about co-opting what the club represents and the diverse voices it is meant to foster, said Edim. Having an outside ambassador can also serve to market the store to new customers who represent diverse communities, and thus help change the readership in your bookstore to make it more inclusive and representative.

“How you facilitate and build your framework is the most important part,” said Edim. “It’s really about cultivating connections with people in the community, and that person you train as a WRBG ambassador will be an ambassador for your store, too.”

Edim said she wants participating booksellers to think about how they can make sure their bookstore is reflective of the community and of society at large. Where diversity, cultural inclusion, and equity start in your store is how they are reflected in your bookshelves and window displays, she said, so make sure to feature widespread black and brown writers in a significant way. These efforts at representation will serve to help move the mission statement of the WRBG book club program forward: “To focus on the need for inclusion, equity, and diverse voices within the book industry… [and to] emphasize the importance of representing a variety of voices, but also encourage publishers to create books that represent a wider set of experiences and perspectives.”

So far, Edim said she has heard from several participating bookseller ambassadors, such as Tameka Blackshir from Book Soup in L.A., who have had success with various marketing techniques to promote the club. Blackshir uses social media to invite people to join the club, tagging Glory, publishers, and ABA on Facebook and Instagram, and seeking out other likeminded organizations with which to cross-promote.

Edim also recommends soliciting the involvement of local educators and community organizers to promote the program, and finding out where the young people hang out in your community and putting up fliers there; booksellers can even start a teen advisory board to help write shelf-talkers. 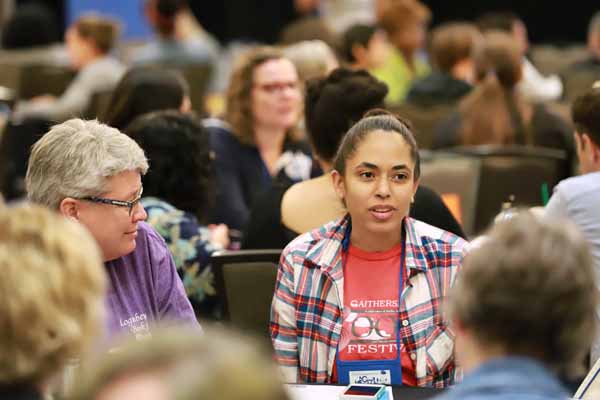 Diversity and inclusion were some of the topics on the table at the WRBG workshop.

Kathy Burnette of The Brain Lair in South Bend, Indiana, talked about some of the strategies she’s used, including reaching out to the local theater to facilitate a discussion with teens following a performance of Fahrenheit 451; seeking support at the Rotary Club; meeting with Notre Dame’s diversity and inclusion team; and reaching out to the local schools to talk to staff about sharing books with students.

“These are the ways you can really build partnerships that go beyond the obvious,” said Edim. “It’s not only a bookstore, it’s a space to build community and really extend the life and mission of your organization. By making sure authors and readers feel welcome in your store, you’re really living your mission statement when you say you want to have a diverse, culturally equitable space.”

In addition to periodically breaking booksellers up into small groups to discuss their ideas, the workshop incorporated National Book Award and Indies Choice Award winner Elizabeth Acevedo’s second book, With the Fire on High (HarperTeen), which is one of the WRBG June book club picks and follows the story of Emoni, a young single mother studying for a career in the culinary arts.

Acevedo took the stage with Edim to discuss her bookstore experiences as well as event strategies for With the Fire on High. She said that while it is important to pose questions to WRBG club members about universal themes like motherhood, gentrification, and micro-aggressions, and to come up with creative companion activities like bringing your own potluck dish, it is also important to ask questions about the elements of the book that make it a good story and what it makes readers feel, just like for any other book club. “These are not meant to be 101 lectures on culture,” said Acevedo.

All booksellers are encouraged to e-mail WRBG@bookweb.org if they are interested in hosting their own WRBG book club. Booksellers who are already participating can visit the designated Well-Read Black Girl page on BookWeb.org to download marketing assets and to join a private Facebook Group.