Ci7 Keynote: Alyssa Milano on the Importance of Activism

In her closing keynote at the 2019 Children’s Institute (Ci7) in Pittsburgh, actress and activist Alyssa Milano came before an audience of bookseller attendees in conversation with Kris Kleindienst, owner of Left Bank Books in St. Louis, Missouri, to talk about the first book in her upcoming middle grade series, Hope #1: Project Middle School, which will be published by Scholastic in October 2019, as well as her lifelong efforts as a social activist.

Milano began the Friday, June 28, afternoon keynote by sharing with booksellers in attendance that she’d had a full week leading up to Children’s Institute. She said that early in the week, she was in New York participating in a theatrical reading of The Mueller Report in which John Lithgow played President Trump, and following that, she travelled to Florida to visit the detention center in Homestead, Florida, which holds 3,000 unaccompanied migrant children. 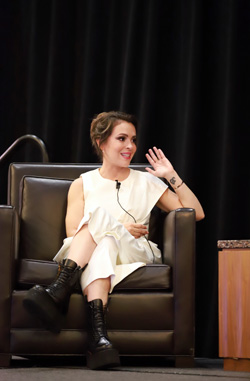 It was at the Homestead facility that Milano met a particularly inspiring man named Joshua Rubin, who travels to detention centers to protest the detainment of unaccompanied minors. “He has now been at Homestead for 163 days,” she said, noting that she’s been lucky to see “amazing people doing amazing things. That’s really what keeps me going and inspires me every day.” While in Florida, Milano also sat in the audience for both of the recent Democratic primary debates.

While Milano could have just been an actor living in southern California, she said, that wouldn’t have been quite right for her. “I was raised by very politically active parents,” she said, noting that her dad had been part of a student strike. “I grew up in a home where social justice, civil rights, and women’s rights were discussed on a daily basis. So [activism] was always a part of who I was and my existence.”

One of the major moments of Milano’s early activism happened when she was 15 years old. While she was working on the set of Who’s the Boss? during the height of the HIV/AIDS crisis, she received a call from singer Elton John. “He told me he was friends with a little boy named Ryan White, and Ryan was HIV positive,” she said, and he’d been kicked out of school because the school believed he would infect other children through casual contact. “[White] and I became good friends, and he said to me one day, ‘Would you be willing to go on TV and kiss me?’”

That action was monumental, Milano said, noting that this was also the moment she realized what it meant to have a platform, and why she could never take that privilege for granted. “I really owe all my activism and fearlessness to Ryan,” she added, “because when you’re a teenager, there’s a lot to be scared of...But I never lost sight of how important that time was in forming who I am as a person. I’ve never been able to separate being an actress and using that to create good.”

To that end, Milano noted, her parents played an important role in her becoming an activist. “They instilled in me what was right and important and the things I needed to do to be a productive part of a community,” she said.

Since then, Milano has been named a National Ambassador by UNICEF and a 2017 Person of the Year by Time. Most recently, Milano helped popularize the #MeToo hashtag.

Milano also noted that the current political climate makes it an interesting time to be an activist. “There was a time when activism meant progressing things forward,” she said. “Right now, we’re trying not to have our rights that we’ve already set forth rolled back. So, it feels like you’re kind of walking on a treadmill right now, because you’re not fighting for progress, you’re just trying to dig your heels in and make sure that they don’t take away what we’ve already fought for.”

“It’s a hard time to fight right now because you have to be really happy with the incremental win,” she added. “You’re not getting a lot of big wins right now.”

Because of that, refueling and self-care is critical, Milano added, noting that, “Richard Branson said that if we all take care of our own circles, then eventually, hopefully, the circles will overlap. And that will become the world — all of our circles make up the big global circle. I thought that was a really profound and great way to put it.”

One of her favorite ways to recharge, Milano said, is to spend time with her children: “I feel like my kids, and maybe kids in general, almost reboot my system. It resets me in a way that gives me the strength to keep going because at this point, I’m fighting for their future.”

Children are also an escape, Milano added, saying, “I’m fascinated by their ability to live in the purest place because they have such innate goodness, and are able to break down what’s going on in the country in the most profoundly simply way that puts things into perspective.”

She then shared a story of a moment she had with her son shortly after returning home from a bus tour with DREAMers, during which they visited Republican offices to fight for the Deferred Action for Childhood Arrivals policy (DACA) in the state of California. Before she left, she’d told both her children what immigrants were going through, and after a 14-hour day she returned home exhausted and in tears. “My son, who was six at the time, ran over to me and gave me a big hug. He looked me right in the eyes and said, Did you do it, mama? Did you win? Did the DREAMers get to stay home?” Milano said. “And I was like, that’s it. It’s just that simple. Did they get to stay home?”

That was Milano’s impetus behind creating the Project Middle School series, for which she has partnered with Debbie Rigaud. The first book, she said, follows Hope, who is trying to find her way not only in a new school, but within her family as well. “It’s about finding your voice and what it means to stand up for yourself and to use that voice to do good and be strong,” she said, “and that doesn’t mean that you have to be independent, because I think teamwork is incredibly important to teach our young children.”

The character Hope, Milano said, also loves science, which is inspired by her own childhood dreams of becoming the first “ballerina astronaut.” Hope also deals with issues of friendship. In book two, Hope becomes a community organizer, which, Milano said, is something everyone has the capacity to do.

“She’s not a political community organizer,” Milano said. “She’s organizing to raise funds for an animal shelter that’s being shut down.”

While the book will touch on the practical aspects of organizing a community fundraiser, it will also explore the same theme of finding one’s voice and having tough conversations. “I’m really proud of this book,” Milano said. “For me, it’s about being a part of the Scholastic family, which was such a huge part of my childhood and a huge part of my kids’ childhood. The fact that I’m going to be able to show them a book with a dedication to them...I’m overwhelmed and very happy and I can’t think of a better project right now.”