In her breakfast keynote speech at this year’s Children’s Institute (Ci7) in Pittsburgh, bestselling author and independent bookstore owner Ann Patchett spoke about all the ways owning a bookstore has opened doors for her in her life, and how it can do the same for others in theirs. 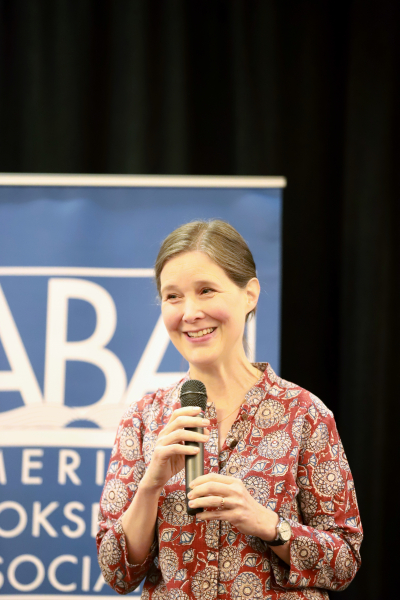 Patchett is the author of eight novels, including The Patron Saint of Liars, The Magician’s Assistant, Bel Canto, State of Wonder, and Commonwealth, and three works of nonfiction, as well as the co-owner of Parnassus Books in Nashville, Tennessee, with Karen Hayes. In introducing her to an audience of children’s booksellers on Thursday, June 27, American Booksellers Association CEO Oren Teicher described Patchett as “one of America’s best-loved novelists.”

“There is a narrative about our speaker that encapsulates what has happened to the indie bookstore community these past 10 years,” said Teicher. “There can be no doubt that bookstores are more successful in this country today because of the kind of effective advocate we have in [her].”

In 2011, realizing that her home city of Nashville was without a prominent indie bookstore, Patchett and Hayes went about assembling a team of booksellers to open Parnassus Books in November of that year. Along her bookselling journey, said Teicher, Patchett has become a national indie bookstore champion, even winning the predecessor to the association’s Indie Champion Award, and a great friend to ABA and to indie booksellers across the country.

In her writing career, Patchett’s novels have become bestsellers and indie bookstore favorites across the country; she has won the PEN/Faulkner Award, England’s Orange Prize, and the Book Sense Book of the Year award; and her work has been translated into more than 30 languages. In 2012, she was named one of Time magazine’s “100 Most Influential People in the World.”

For some people, that’s a really sad thought, she said, “but for me, with every door that we close, we keep more of our own energy and we become more focused. One of the doors that certainly was closed in my life was to retail; at maybe about six, I pulled that door shut.”

Patchett is glad she opened the door to indie bookselling, given that the benefits include inviting her author friends to Parnassus for readings and signings, and having the ability and the platform to recommend her favorite books to others. “The contract that you make between yourself and a book is not complete until you force someone to read it,” added Patchett.

In addition to her keynote, Patchett also attended Children’s Institute to promote her very first children’s book, Lambslide (HarperCollins), which is illustrated by Fancy Nancy series creator Robin Preiss Glasser and came out in May. Harper will publish Patchett’s new adult novel, The Dutch House, on September 24.

Patchett met Preiss Glasser in January 2018, and the illustrator began trying to convince her to write a children’s book — all of a sudden, another door opened that once was closed. As the suggestion took hold, Patchett told booksellers, she began to see ideas for children’s books everywhere, from a bison who moves to Rome with the deer and antelope (inspired by the lyrics to the classic tune “Home on the Range”), to the idea for Escape Goat, which HarperCollins will publish next.

Patchett’s first foray into children’s book writing takes on the topics of democracy and consensus-building in the arena of farm animals, which lobby and organize to have a slide installed in their barnyard. Patchett said she first got the idea for Lambslide from the special election campaign for Democrat Conor Lamb, who became the U.S. Representative to Congress for the 18th District of Pennsylvania (which includes Pittsburgh) in March 2018. Specifically, Patchett was inspired by a sign from a supporter she saw in the news that read “Lambslide!”

Patchett said she has loved going on tour with Glasser for Lambslide, especially seeing how her collaborator is able to connect with the children they meet. When she had to do a few events on her own, Patchett, who has no children, said she began to appreciate kids in a way she never had before.

While she still may not want to be a mother, this appreciation of children, she realized, was another door she had closed; it turns out, she had always felt uncomfortable around children as an adult because she was so uncomfortable herself when she was growing up. Due to her family’s circumstances at the time, Patchett didn’t end up learning to read until the third grade.

Owning a bookstore has actually changed the way she reads now, said Patchett: in the past, she never read books that were just coming out, but now as a bookstore owner, this is practically all she consumes. One of her most recent, The Resisters by Gish Jen, is definitely a title that booksellers should look forward to in 2020, Patchett said.

“What I have discovered, because now I only read galleys, is that fiction has fashion. I never thought about that before,” she said. “I now read fiction and nonfiction and everything else the way I would read the paper. I am informed by the information I get from these books. When you read going back and forth throughout history, you can’t detect the patterns; it’s been really fascinating. So that has been a huge benefit that I never expected from opening the bookstore.”

The author concluded her talk by thanking her fellow booksellers for what they do and acknowledging the importance of their work.

“If I hadn’t opened a bookstore, if I hadn’t met Robin the day she walked in that door, I sure as hell never would have written a children’s book,” said Patchett. In writing Lambslide, she said, “The door kicked open. That’s what owning a bookstore can do for you…Guys, you are doing God’s work. I appreciate you so much, and I am so proud to be a member of your ranks.”