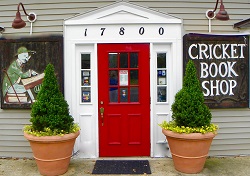 Since then, the store has changed ownership twice: in 1990, it was bought by Mary Jo Wilson and Mary Miller, and now Wilson’s daughter-in-law, Sharon Evans, has the reins. Despite the changes in ownership, this year Cricket Book Shop will mark its 50th consecutive year as a member of ABA.

Before Evans bought Cricket Book Shop, she was working as a hairdresser in Washington, D.C. When Miller moved to Florida and left the business, Wilson was left to work alone, and Evans stepped in.

“It was way too much for my mother-in-law, so I purchased Mary Miller’s half of the store and have been there ever since,” Evans told Bookselling This Week, noting that the store has always kept its ABA membership active throughout the chain of ownerships. Selling books was “a whole different ball game” 25 years ago, she added, before Amazon entered the picture.

Her favorite part of being an ABA member has been the unlimited access to resources the association provides through its website, Evans said. “One of the things I use the most on the ABA website is the Book Buyer’s Handbook,” she noted. “It is very helpful when I need to find a publisher’s phone number or their discount schedule.”

The store also dedicates a portion of its retail space to gifts. “We try to sell a lot of [work] by local crafters on consignment,” Evans said. “We also have pottery and American Girl doll clothing.”

Although the business can be tough, one of her favorite parts of being a bookseller, Evans said, is “when a customer comes in and brings their grandchildren or children and tells us that Cricket Book Shop is their favorite store.”

“We’ve got to keep these kids reading,” she added. “That’s one of the most rewarding things we have.”