Daybreak Press Global Bookshop & Gathering Space in Minneapolis, Minnesota, provides a “third space” for the local community, where people from all walks of life can safely come together to share their passions, learn from one another, and engage with complex social issues.

The bookshop is a project of Rabata, the nonprofit organization founded in 2014 by Anse Tamara Gray to promote positive cultural change through individual empowerment and education, particularly for women. Currently, Rabata’s other projects include an online seminary program for Muslim women, workshops for female converts to Islam, and Daybreak Press, which publishes books by authors from around the world out of the bookstore’s home on the University of Minnesota campus.

In addition to shelves filled with books on faith, feminism, and social justice, the 1,500-square-foot store features a private room that groups can reserve for meetings, events, or other activities. The dedicated space, which can comfortably hold about 20 people at a time, was created in November 2015 after the store moved from its old location in St. Paul to a spot on the university campus. Located in the back of the bookstore, the room is free for anyone to reserve. 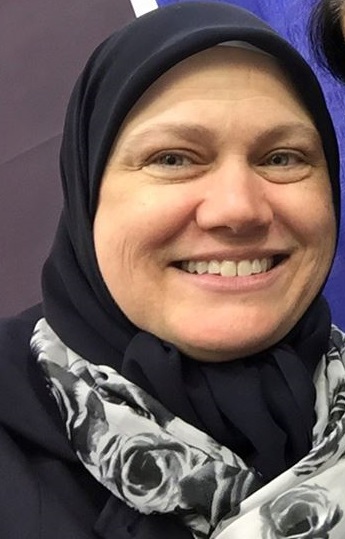 Groups that reserve the space for meetings, Gray said, regularly include nonprofits, the boards and planning committees of organizations, student groups, poetry and book clubs, and once, a student birthday party. Out on the main floor, the bookstore also hosts author appearances and readings, including launch events for books by University of Minnesota professors and a recent visit from the Chicago performance group Cultural Circles.

Gray founded Daybreak on the concept of a “third place,” developed by sociologist Ray Oldenburg in his 1989 book The Great Good Place. The “third place” is defined as a space that is neither a workplace nor a home, but rather a whole other place that serves as an intellectual hub where the community can gather to exchange ideas. At Daybreak, this means a space where people of all races, ethnicities, religions, sexual orientation, and gender identities can come to safely share their opinions.

“At Daybreak, people can come in and listen to other people talking about things that they are interested in, in a safe space where they are not feeling threatened by the people in the room,” said Gray, a Muslim woman who has deep roots in the field of education. For 20 years, Gray lived and taught in Syria, where, she said, she witnessed the power of learning. Currently, Gray is working towards her doctorate degree in policy administration at the university.

Daybreak Press Global Bookshop employs two full-time booksellers and one-part time bookseller, all of whom are Muslim women who wear the hijab, said Gray. They are always willing to engage with customers who are curious about their culture, to talk about the books in the store, or discuss global and social justice issues.

The local area’s Muslim community is very insular, Gray said, despite the fact that the state of Minnesota has about 200,000 Muslims, including 30,000 Somali-Muslim immigrants in Minneapolis alone.

“As a Muslim, I wanted us to be a place where people could interact with Muslims as well as the rest of the community,” said Gray. “I thought about the issue of the common space and if there were ways we could work together so that [we as Muslims] can be less scary to people.” 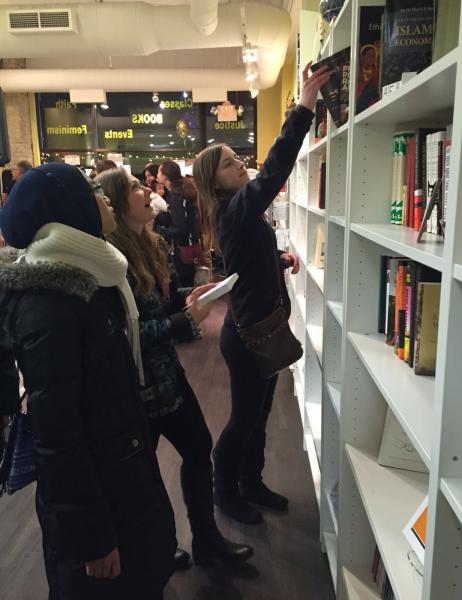 Customers at Daybreak Press Global Bookshop can browse through the store's books on social justice, faith, and feminism.

Gray said the store’s collection of books is divided in to three categories: feminism, faith, and social justice, which are then broken down into subcategories. The feminism category includes books about women in history and women globally, as well as feminist theory. The store’s social justice section has a wide variety of books about racism and issues surrounding racism, environmentalism, and activism.

The store’s section on faith features numerous interfaith and intrafaith books, including many books on Islam. Daybreak Bookshop is the only place in the area that offers books on Muslim topics that are mostly written in English, Gray said, which helps the store to serve the members of the larger Muslim community.

“One of the great problems with books about Islam is that they always have to do with the worst possible things you can talk about,” Gray said. “We wanted to make sure we always have positive books about the faith and not books that are going to increase the stereotype, but that will increase understanding.”

Daybreak also features a section of books about self-healing and self-care, Gray said, as well as a popular collection of global fiction and a children’s book section, which includes books with strong women characters and characters who are people of color. Gray said the store does sell a few non-book items, including literary tees, pens, magnets, and cards, but books have always been a better seller than non-book items.

“We really believe in literature as a form of art and the importance of education and of people getting engaged with the community,” Sarah Abe, the store’s general manager, told Bookselling This Week. “I love being here and I love working here, and I love how people come here to get books and to get educated and to meet other people passionate about the same issues.” 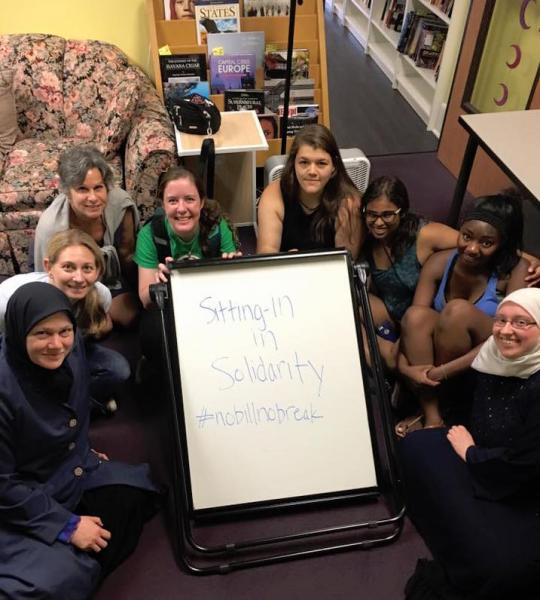 A Daybreak customer and staff sit-in in support of the #nobillnobreak campaign to force a vote on gun control in the U.S. House.

In this time of harmful rhetoric against Muslims all over the world, and as terrorism perpetrated by the radical Islamic group ISIS rises, Gray said the store has gotten a few aggressive customers who have spoken harsh words to staff. Mostly though, people have been kind and demonstrated concern for those who work there.

“Our store allows for a psychological free space where people can talk and share,” said Gray. “There is so much that is bad going on in the world right now, and people want to be able to do something. These problems really are too big. So coming into a space like this, they feel like they are doing something: maybe they buy a book about an issue that is overwhelming to them, or maybe they just talk about the issue with customers or staff.”

Currently, Gray is working on expanding the store’s already successful programs and increasing offerings to the community at large. Recent attempts at stronger community engagement have included involvement in an event with Black Lives Matter following the shooting of Philando Castile by a Minnesota police officer.

“We are learning how to grow the store into an activity space where we can be a platform not just to host you and your issues, but actually to also be a platform of cooperation with other organizations,” Gray said.