Douglas Preston, Richard Russo on the DOJ and Amazon

The featured talk “Authors, Agents, and Booksellers — United for a Fair Marketplace” on Sunday, January 24, provided Winter Institute 11 attendees with an update on last July’s appeal by the American Booksellers Association and Authors United that called for the U.S. Department of Justice (DOJ) to investigate Amazon’s business practices. 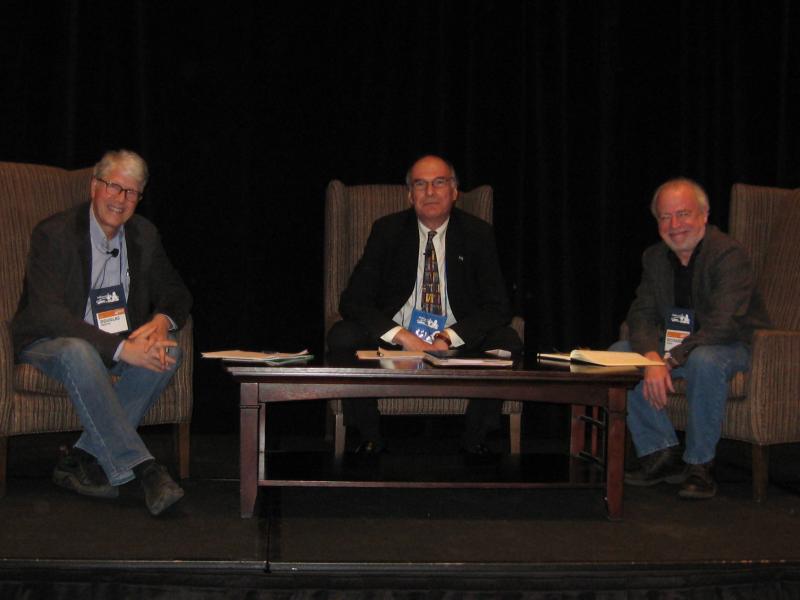 The session brought two big-name authors — Douglas Preston, founder of the author advocacy group Authors United, and Richard Russo, vice president of the Authors Guild — together with ABA CEO Oren Teicher, who led a discussion about the online retail giant’s aggressive and troubling dominance of the bookselling market. Teicher called the Amazon problem “one of the most pressing and challenging issues that we’re facing.”

Because of travel disruptions due to the blizzard affecting the East Coast, scheduled participants Gail Hochman, of the Brandt & Hochman Literary Agency and president of the Association of Authors’ Representatives, and Roxana Robinson, author and president of the Author’s Guild, were not able to attend Wi11 and participate. The letters sent by ABA and Authors United to the DOJ were also publicly supported by the Association of Authors’ Representatives and the Author’s Guild.

In its appeal, Authors United emphasized that Amazon’s monopoly is a First Amendment issue, and this argument, Preston said, seemed to resonate the most with the DOJ.

“It’s not just an antitrust issue,” Preston said. “It’s a freedom of information issue…This would be a problem even if [Amazon] were a benign company, but it is anything but benign.”

The way Amazon does business has a chilling effect on publishers, Preston argued, and he said that, as a result, he believes publishers are now far less willing to take risks on the books of emerging authors or to devote resources toward supporting books by midlist authors.

Preston said that Authors United was arguing strongly that Amazon’s behavior is illegal, predatory, and anticompetitive, and that by selling books at a loss as a customer acquisition strategy it has devalued the intrinsic worth of books in customers’ minds.

Preston argued that the online retailer has the entire book industry in a financial stranglehold. “Amazon is responsible for more than 70 percent of all sales of physical books, over 65 percent of e-book sales, over 40 percent of sales of new books, and over 85 percent of e-book sales by self-published authors,” he said. “To just give you a hint of how big this market is, Penguin Random House, the largest publisher in the world, publishes about 15,000 titles a year. Amazon is uploading over 500,000 new self-published titles a year, but Amazon controls their publishing.... Amazon has as many self-published titles for sale as there are books in Harvard’s Widener Library. It is by far the largest publisher and distributor of new books in the world.”

To further emphasize his point, Preston noted that Amazon’s 70 percent market share of print book sales is approximately equivalent to Standard Oil’s share of the petroleum market in 1911, when it was divided into 34 companies.

“But the people who are really getting hurt by this,” Preston said, “are the midlist and the debut authors, who were absolutely devastated by what Amazon did to Hachette” in a 2014 contract dispute. “Three thousand authors — most of them debut authors — are now no longer writing books,” he said.

For his part, Russo said he became involved in the issue of Amazon’s effect on midlist and emerging writers a few years ago, when he joined the Authors Guild. The goal of the Authors Guild as an organization, he said, is to defend the ability of writers to make a living, made harder today by both Amazon and such factors as  as digitalization.

Joining the Authors Guild, Russo said, led him “to think about authorship in general, and the writing life in general, and how the digital revolution has changed things for all of us, but especially for emerging writers and especially midlist writers.”

The Pulitzer Prize-winning author of Empire Falls, whose daughter Emily Russo attended this year’s institute as a prospective bookseller, said the writing life is no longer what it was even 10 years ago. Echoing Preston, Russo cited the reason as the downward pressure that Amazon has placed on publishers, which has had a painful financial effect on many authors.

What Amazon is doing is “upsetting the ecosystem” of the book industry, which is a delicately balanced one defined by diversity, Russo said. But it goes beyond that.

“It is not just about the book business. It’s about the extraordinarily negative effect on the global economy,” he said.

Going forward, the best way for booksellers to help the cause is to write to their representatives in Congress, Preston concluded. But right now, while waiting for the DOJ’s decision, he’s hopeful that, at least, the dialogue has begun.