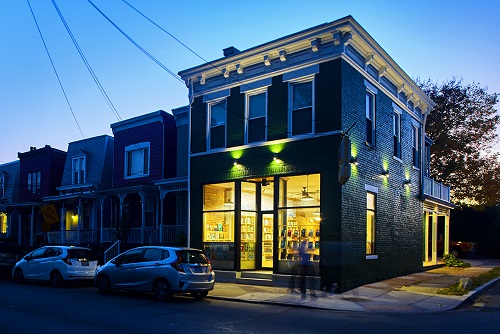 An exterior view of Downbound Books in Cincinnati, Ohio

Kornbluh told Bookselling This Week that his career in the book industry began when he was in graduate school at the University of Massachusetts in Boston. While finishing his master’s degree in American studies, he worked as a bookseller at Newtonville Books. Following that, he worked at Harvard University Press in various sales and marketing roles.

“I really liked what we were doing and I really believe in university press publishing,” Kornbluh said, noting that he’ll be stocking university press titles in-store. “But I have always loved booksellers and bookstores, and I always imagined being back in a store eventually.”

In 2018, Kornbluh decided to leave Harvard University Press and move back to Cincinnati.

“I ended up moving back home and thinking about whether the shop that I wanted to own had a good chance here. I decided it was worth giving it a go,” he said. “Northside is a neighborhood with a lot of character. There are a lot of people who have lived here for a long time and a lot of restaurants and bars, but retail has not stuck so successfully.”

One neighborhood business that has endured is Shake It Records, and Kornbluh said he’s excited to be located closeby.

“It’s just about a block and a half away from us, and it consistently pops up on lists of the best record stores in the country,” he said. “I’m stoked to be close to them because people come from all over to visit. They’ve been the real stalwart of retail in the neighborhood.”

Since Shake It sells some books, Kornbluh added that the two businesses will be coordinating to be sure they don’t “step on each other’s toes.” Said Kornbluh, “I think they’re excited to have a new shop come in to help solidify [retail in the area] and bring out people.”

Kornbluh said the local community is excited about Downbound as well. He’s been documenting the store’s construction on social media, which helped it to amass a bit of a following in the area. When the store opened its doors on the afternoon of October 25 — with no other announcement besides a post on Instagram — people quickly began to stop by.

“A lot of the people who have been coming in have been following [the construction] all along and knew that we were coming, but a lot of them also happened upon the store or stopped in after we opened,” he said. 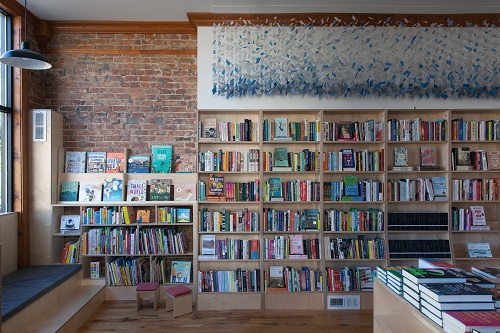 Kornbluh told BTW that his landlord handled the building and interior construction, but he built most of the fixtures himself.

“When I thought about having a bookstore, I wanted to build things on my own...partly because the commercially available fixtures have a kind of sameness to them, and there was a certain way that I wanted my fixtures to look, and also because of the size of the space. I knew I had to use it really efficiently in order to get enough books in without it feeling cramped or uncomfortable.”

Handling the project himself made it a much more manageable process, he added, despite the fact that it extended the time from when he signed the lease, to when he opened his doors.

“Doing it all myself meant that I could figure it out as I went. My dad, who was an architect, is retired and likes to keep busy, so he was doing tons of drawings for me on Sketchup, and that was super helpful,” he added. “If I had hired someone in advance, we would have had to have all that stuff figured out in advance, and it would’ve been hard to make changes as we went.”

In addition to the fixtures, Kornbluh also put thought into what kind of art he’d like to incorporate in-store.

“All of the wood in the store is just birch plywood. It’s not stained or anything, so it’s a very pale blonde wood — I wanted the books to be the decoration,” he said. “But there’s a wonderful local artist who works with paper, and there was this space in the store that I thought would be the place to have just one central sort of decoration.”

Kornbluh ended up calling the artist, Jessica Wolf of Paper Acorn, into the store, where they visualized the blue paper wall hanging that is now installed.

Overall, Kornbluh said he’s looking forward to Downbound feeling like a community bookstore. To build his collection, he told BTW that he’ll be participating in a “community curation model” where community members will have a chance to pick books related to their work and fields in place of the more traditional staff pick spotlights. 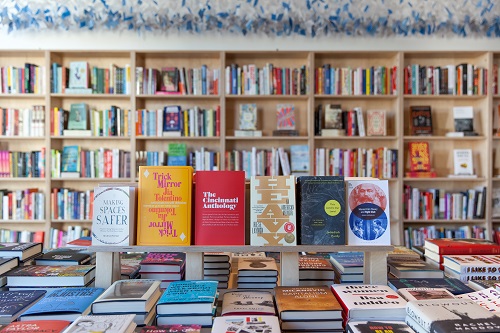 Another view of Downbound's bookshelves

“In a store this size, people should feel like everything was chosen carefully, which basically means you want your whole store to feel like everything is a staff pick,” he said. Instead of dedicating a shelf to staff picks, he’s excited to incorporate community voices into his store. “When we opened, I had my friend Tom McKenna, who owns a bakery downtown, pick half a dozen books on bread making. We set up [the display] and there’s a little shelf talker on each book from him.”

Kornbluh added that bookseller Sarah Fischer has also been "integral to getting things off the ground." Said Kornbluh, "She's curating our cooking and children's sections, which are definitely two strengths of the shop."

Additionally, Downbound will be using its book collection to call back to the tradition of bookselling in the local community. Kornbluh noted that there was once a feminist bookstore called Crazy Ladies in a location just a few blocks away that closed in the early 2000s.

“They stocked books that the people working here and myself are really interested in,” he said. “We already had this really strong collection of books on gender and sexuality and the politics surrounding all of that, and as an homage to that lineage of bookselling in the neighborhood, we’ve named our section for those books Crazy Ladies, Jr. We’ve been open seven different days and people are really responding and excited for the curation in the store.”

Kornbluh said he’s also excited to work with nonprofit organizations in the community like WordPlay, which is a literacy organization that works closely with children and the community to help students develop strong reading and writing skills.

“What I’m most excited about is having this store really be a rooted part of the neighborhood, which is where I lived for the last couple of years before I left Cincinnati,” he said. “When I came back to town, this was the only neighborhood I considered trying to do this in.”