East City Bookshop Hosts “You Have to Read This!”

East City Bookshop in Washington, D.C., recently invited community members to read their favorite nonfiction essays and excerpts at the store’s inaugural literary sharing event, “You Have to Read This!” 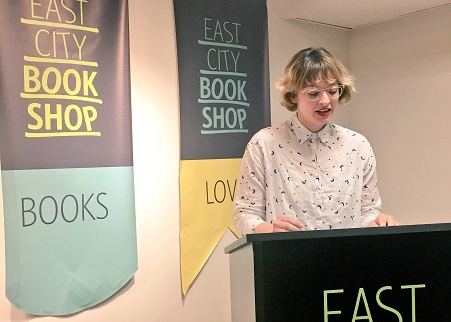 Marissa Lorusso reads at East City Bookshop's "You Have to Read This!" nonfiction reading event.

According to Sarah Baline, East City Bookshop’s general manager and the event’s main organizer, around 30 people attended the reading on Wednesday, April 19. The invitation posted on the store’s website asked potential readers to identify “that article or essay that you return to year after year, the piece of writing that you always recommend, the book you always press into your friends’ hands.”

The idea for “You Have to Read This!” stemmed from a Twitter conversation that took place after the November election between Baline and three friends, all media professionals based in D.C.: Washington Post writer Julia Carpenter, NPR music writer and local musician Marissa Lorusso, and Washington Post social media editor and Ladycast podcast host Alex Laughlin.

“Alex was having a bad day and posting articles that made her happy or that always make her think, and that started a thread,” said Baline. “As the conversation evolved, we thought of doing a reading and having people come and share these in person.”

After posting a callout for submissions, with the stipulation that readings could only be three to five minutes (or three to five pages), Baline selected a group of readers to share their favorite pieces in front of an audience at the bookstore. Contrary to what some might expect given today’s highly charged political environment, Baline said, the pieces that were shared weren’t all just pieces on Donald Trump. Instead, readers’ selections comprised a variety of thoughtful essays and excerpts on a range of topics.

“Our event was not political for the most part,” said Baline. “The pieces that people shared were things they had been reading for many years and had always returned to. It was a really interesting variety of writing.”

Readers introduced each selection with a short explanation. After each piece, Baline, who moderated the event, read selections from 300 Arguments: Essays by Sarah Manguso (Graywolf Press). The evening’s readers included Ellen Clair Lamb, who read “Channeled Whelk” from Gift From the Sea by Anne Morrow Lindbergh (Pantheon); Suzanne La Rue, who read the essay “Ethics and Narrative” by Chris Abani; and the three participants in the original Twitter conversation that spurred the event: Carpenter, who read a selection from Tiny Beautiful Things by Cheryl Strayed (Vintage); Lorusso, who read “Just What You Need to Hear Today” by Jamie Lauren Keiles from her newsletter, TinyLetter Commodity Fetish; and Laughlin, who read the essay “Becoming the Third Wave” by Rebecca Walker.

Hannah Sternberg, East City’s events coordinator and marketing manager, noted that the readers were “people who were affiliated with the book industry in some way, but also just people who were enthusiastic book readers who wanted to share something meaningful to them.”

Sternberg said she hopes that the store, which celebrates its one-year anniversary on Independent Bookstore Day (Saturday, April 29), will make “You Have to Read This!” into a regular series.

“It’s the first in what will hopefully be a series of events in which average customers come in and read,” said Sternberg. “We’ve done panels and events with multiple authors in the past, and last year we had a banned books reading where we invited six authors and one librarian to read from a banned book that meant something to them. What we found in this first year is that we’ve actually gotten a lot of attention for our nontraditional events. We’ve done theatrical performances, concerts, and parties. We’re trying to keep to that spirit.”

Baline said that while the initial event involved a general selection of nonfiction pieces without a particular focus, the next event in the series will likely have a narrower angle.

“We decided to keep it pretty broad for the first event. It was successful so we’re hoping to do it again and maybe narrow it down to a topic,” said Baline. “We were thinking one could be relationship writing or food writing. We really want to do it again. Our goal would be a topic where there would be lots of different writing from many different voices.”