East Coast Booksellers Dry Out and Power Up

Due to its proximity to the Mystic River, Bank Square Books in Mystic, Connecticut, suffered severe flooding, and has been closed since last Monday. The store is aiming to reopen next Monday, November 12.

“It was a complete nightmare,” said co-owner Annie Philbrick, who, on the day of the storm, raced to remove Bank Square’s shelving and inventory from the rising waters as quickly as possible. Philbrick contacted a local moving company that was able to transport two trucks filled with books and shelving to a dry location.

Luckily, the store’s insurance [from LIBRIS] includes protection of inventory, which covers moving fees, as well as coverage for interruption of business, Philbrick said. The building’s landlord has been extremely accommodating, and is covering the cost of the new tile floors, scheduled to be installed this week.

The Book Industry Charitable Foundation (BINC) was immediately in touch with Bank Square to provide assistance to its staff. “They’ve been great,” said Philbrick. “They came to me before I could even fathom what had happened.”

Despite the support the store has received, Philbrick is worried about recuperating from two weeks of business loss. To that end, she posted a PayPal button on the store’s website last week and has since received donations from customers, authors, agents, and sales reps. “I’m completely overwhelmed by the support,” she said. “It shows the importance of bricks-and-mortar stores in the book world.”

New Jersey’s BookTowne has been closed for 10 days due to power failure, and the surrounding town of Manasquan “is like a ghost town,” said owner Rita Maggio. “The town is not offering any hope that we will be able to open any time soon. It is very troubling, not compared to the real personal devastation in the town, but in the world of a small independent business,” she said.

Watchung Booksellers in Montclair, New Jersey, was without power until Tuesday morning. Regardless, the store remained open for parts of each day, and updates were posted to the store’s Facebook, the last of which read: “Huge, huge thanks for your overwhelming show of support. We have the best customers ever. If you are still not back on, come be warm with us...”

Cape Atlantic Book Company in Cape May, New Jersey, which reported very little damage from the storm, has been open since last week.

Delaware’s Browseabout Books in Rehoboth Beach and Bethany Beach Books in Bethany Beach both had little damage and have been open for business since last week. 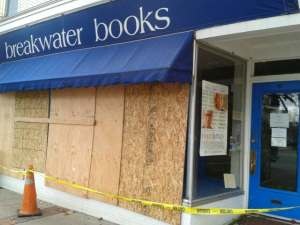 Breakwater Books in Guilford, Connecticut, experienced quite a bit of damage, but no flooding, and was closed for five days, according to owner Maureen Corcoran. The store opened a few days without power, and the front window, which was completely smashed in, was boarded over. The window has since been replaced, and Breakwater is now reopened fully.

R.J. Julia Booksellers, in Madison, Connecticut, also remained open for parts of the week despite having no power. When power was restored last Friday, the store returned to normal hours.

In Brooklyn, where business quickly returned to normal following the storm, two bookstores are contributing to relief efforts for those less fortunate. WORD is donating 10 percent of its past weekend’s sales to Occupy Sandy, a coordinated relief effort to help distribute resources and volunteers to help neighborhoods and people affected by Hurricane Sandy, and Greenlight Bookstore is giving 10 percent of its sales from last Tuesday through Sunday to Occupy Sandy, as well as the Brooklyn recovery fund.

Stores that may still be experiencing difficulties related to Hurricane Sandy are encouraged to contact ABA Member Relationship Manager Kaitlin Pitcher. LIBRIS policyholders can ask  Pitcher to contact LIBRIS on their behalf, or they can contact LIBRIS directly at (888) 694-8585 or at libris@onpointunderwriting.com.

Information about government assistance is available at usa.gov and SBA.gov.