Last November, The Elliott Bay Book Company in Seattle, Washington, heard from a local high school teacher, Adam Gish, who wanted to share his love of reading and bookstores with his students in a new way: a school field trip. 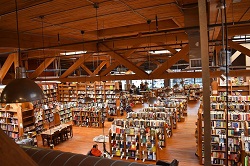 Tracy Taylor, general manager at the bookstore, told Bookselling This Week that Gish had brought students to the store in the past, but this time he wanted to do something on a larger scale. In total, 100 students visited the Elliott Bay for this field trip.

“He reached out to us to see how we would feel if that many students came shopping all at once,” she said, noting that he also asked if he could buy $50 gift cards for each of the students. He solicited anonymous private donors as well as University Village shopping center to help offset the cost, and Elliott Bay provided a 20 percent discount for the students as well, so “the students could have more buying power.”

On the day of the event, Elliott Bay gave the students a tour of the store and offered a book talk, which introduced them to a wide range of titles. During the talk, Taylor said, two female Muslim students in the front row lit up when a bookseller began talking about Ms. Marvel/Kamala Khan, which is about a female Muslim superhero. “They couldn’t get to that book fast enough,” she added. “That might have been the best moment of the day.”

Overall, Taylor said, the event was a total success. Students arrived at 10:00 a.m. and left at 12:00 p.m., and had 45 minutes to an hour to shop. While the gift cards took longer to process at the register, having that time to meet the students “made it more personal,” she said. “It was an amazing day.” Taylor added that at the very end of the visit, the ice cream shop around the corner delivered ice cream for the students.

“I think it’s a great idea if you can get your community to support this or if there are sponsors,” Taylor added, noting that Gish spent a lot of time planning all aspects of the event himself, from how much money to put on each gift card to give students that most meaningful experience to deciding how students should apply for the trip and which ones should attend.

Students were asked to write Gish a letter stating why they would like to go. “He specifically wanted to make sure that students who might be intimidated, uncomfortable, or inexperienced shopping or coming into a bookstore might leave thinking this was a place they might feel comfortable coming back to on their own,” said Taylor.

Taylor also recalled noticing a group of students who were standing together laughing and looking at graphic novels. Said Taylor, “Mr. Gish and I were both watching them when he said to me, ‘Many of these students may not know each other, but I think about how many conversations are going on right now between them as they talk about these books, and I picture them passing each other in the hall and know they have this connection over a book.’”