Face Out: ABA Board Member Kenny Brechner on His Life Among Books

In the latest installment of our series profiling American Booksellers Association Board members, Bookselling This Week talks to Kenny Brechner, owner of Devaney Doak & Garrett Booksellers in Farmington, Maine. In May, Brechner was elected to his first three-year term (2017–2020) on the ABA Board.

Bookselling This Week: Please talk about your early experiences with reading and books. 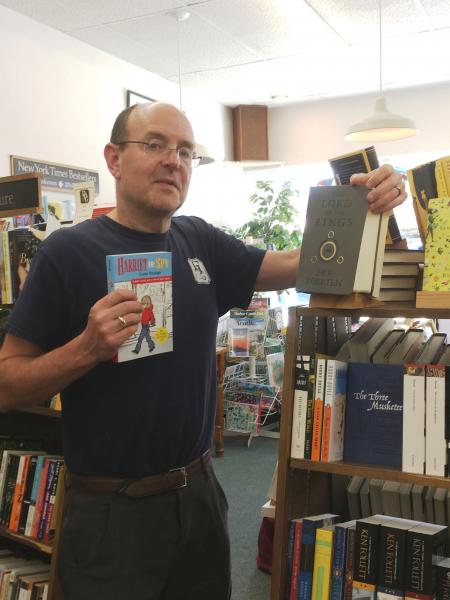 Kenny Brechner: My mother taught me to read when I was three, using Hop on Pop. I was, to paraphrase Wodehouse, a bit like a famished young seal tasting its first fish, and have been a voracious reader ever since. I recently reclaimed my childhood copy of the second book I remember reading, Little Bear’s Friend. Time disappeared when I held it in hand. A four-year-old’s reading experience, irretrievably distant, suddenly resurfaced. On the inside cover, my name, written in my mother’s hand, was crossed out and replaced by an early scrawl representing the name of my brother Eric. A dark deed brought to light!

The power of the physical book as a ladder into the past is potent indeed, but it is also a supple extender into other minds and worlds. I recall a friend, who is now my wife, telling me she thought I would like Virginia Woolf’s The Waves, which I promptly bought at the college co-op. Whenever I pick up that very copy of the book, sorcery is set to work. A vivid memory is conjured of sitting on a hot 1981 Atlantic City sidewalk, waiting for a different friend to get off work. I open The Waves’ pages and experience again a kind of intellectual vertigo at the jolt of recognition, the encountering of aspects of my inner world incontrovertibly outside myself. There is nothing more important, interactive, or powerful than the physical book. The opportunity to connect with young readers over time at the bookstore is something that cannot be overstated in terms of either its importance or its satisfaction

BTW: How did you begin as a bookseller, and how long after starting in bookselling did you begin to feel that you had found a special vocation?

KB: I began running DDG as the manager shortly after it opened. I was in grad school at the time and was running it on the side. After I got my master’s in history, I had to decide whether to continue working toward a Ph.D. or go all in at the store and become a majority owner, which was on offer at that point. It was obvious that I had found my calling at the store. Indeed, some professors had gone so far as to accuse me of being literati even when I was trying to appear to be a serious history egg.

BTW: When did you first become a member of ABA? What motivated you to join?

KB: This is a guesstimate, but I would say I joined ABA 25 years ago. The primary interest at the time was in supporting advocacy and getting my hands on the Book Buyer’s Handbook, the big red monster that was a must-have back in the day. As ABA’s role has expanded from advocacy into more robust education, my interaction with it has grown as well.

BTW: What do you think are some of the most important changes in bookselling since you took over your store?

KB: The Internet and digital technology have been the core engine of change, and it is a two-edged sword, of course. We were the keeper of the keys in 1992, when I began bookselling. Information regarding books in print literally resided in Books in Print, and stock availability was to be found in microfiche stacks from wholesalers. Information is ubiquitous now, and the need to be in command of it and to maintain a store that is literally immersed in community outreach is a life-and-death affair.

There are positive changes that resulted from the rise of technology. E-mail listservs, at any rate, greatly increased outreach among my bookselling colleagues, reduced isolation, and were a dynamic force in bookseller-to-bookseller education and support. The New England Children’s Booksellers Advisory Council (NECBA) listserv, in particular, was a revelation to me and the starting point of some lifelong bookselling friendships that are beyond price.

E-mail and social media have also greatly increased bookseller-to-author and bookseller-to-publisher connections and partnering. The effectiveness of e-mail and online marketing are benefits, too. The downsides, largely due to a lack of filtering and regulation, are considerable, however. The rise of print-on-demand publishing, for example, has transformed the volume and spread of vanity books from a still reservoir into a thundering self-published tidal wave. I believe in filters. Traditional publishers’ acquisitions aren’t perfect, of course, but publishers and professional bookstore buyers play a vital role in the intellectual marketplace. Most importantly, proprietary publishing is the last substantial bulwark against the unregulated nature of online retail, which is coalescing around Amazon even as you read this. The biggest change in our bookselling world has been Amazon’s ability to blanket its assault on traditional publishing, bookselling, local commerce, sustainable communities, and traditional cultural norms under the false narrative of passive inevitability. Challenging that narrative successfully is our task.

BTW: As an ABA Board member, what are your key goals for fostering the book industry, and bookselling in particular?

KB: I want to help increase the stature of independent bookselling in school markets. Secondly, ABA has been hard at work on strengthening our bonds with traditional publishers, a vital undertaking that needs our ongoing attention, to be sure. Finally, bearing in mind Gandalf’s advice that it is our duty “to do what is in us for the succour of those years wherein we are set, uprooting the evil in the fields that we know, so that those who live after may have clean earth to till,” we need to create dynamic outreach that results in building public will and consensus around the principle that antitrust regulation should be reanimated from the cave in which it has been slumbering.

BTW: What are you reading now?

KB: I just finished Warcross, Marie Lu’s new YA techno thriller, this morning. It was a terrific read, though I did guess who Zero was well before the big reveal. The gaming element at its core was very immersive, and the freedom from vs. freedom to tension in it is well-handled and gave the book some real depth. With some strong romance and a compelling first-person narrator, Warcross is the whole package. I think it will be a big book, and deservedly so.

BTW: You get a day to walk through any city, town, or landscape with any one writer. What writer and what place?

KB: Oh that’s easy: Lothlórien in the spring with J.R.R. Tolkien. I also wish I could have the chance to play town with Louise Fitzhugh. Sigh!