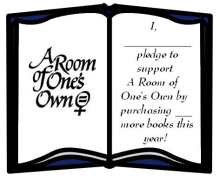 At the beginning of 2011, Sandi Torkildson reviewed A Room of One’s Own’s finances and decided they needed a boost if the Madison, Wisconsin, store was to renew its lease. In mid-February, she e-mailed more than 3,000 of A Room of One’s Own’s customers and asked if 350 of them would pledge to buy five more books a year.  This week, Torkildson reported that the “Five Book Pledge” has been “overwhelmingly successful.”

When Torkildson came up with the idea for the pledge, she wanted to make it easy for customers to help and to couch the appeal in positive terms.  “We were trying to think of a way to make people aware that we needed their support but without seeming alarmist. And we wanted to ask them for something that was doable, to make it a meaningful goal rather than just say, ‘Buy more books.’” Though the bookstore originally asked for 350 pledges, it now has close to 600.

The e-mail to customers, which was signed by Torkildson, co-owner Nancy Geary, and the staff, explained that decreasing textbook sales and poor holiday-season sales led to a year in the red. “We are hoping to find 365-plus people willing to pledge to buy as few as five more books from us this year, and possibly to encourage your friends to do the same,” it said, and added, “We know our customers value Room and want to keep Room a strong, independent bookstore downtown. We are optimistic these pledges will help us achieve this goal.”

The pledges hang at the entranceway of the store.  “We made these little pledge forms and staple them with some Martha Stewart technique on different color ribbons. People like to find their names, which is difficult because there are so many now,” she said.

Thanks to the pledges and the renegotiation of its lease, A Room of One’s Own was in the black at the end of its fiscal year, this past summer. And Torkildson’s predictions for this year are even rosier. “It looks really good,” she said. “We’re already up in sales 10 percent for August, September, and October.” In fact, A Room of One’s Own has plans to expand next summer and will move to a 6,000-square-foot location, doubling its current square footage. Its focus will continue to shift from a feminist to a general bookstore with strong LGBT and feminist sections.

If a bookstore needs help, it’s important to communicate that early, said Torkildson. She considers it consciousness-raising. “The biggest lesson I learned is that you need to let your customers know what you need. Sometimes they need a little push. It makes them understand that buying a book at their local bookstore is a real value to their community.”

A Room of One’s Own’s message reached beyond its regular customers to local merchants, who became more aware of their neighbors. “There’s a local wine merchant, and I always shopped there and bought their wine. Suddenly they started shopping here, too,” said Tokildson. “I think they realized, ‘Oh! We’re all in this together.’”