Flyleaf Books in Chapel Hill, North Carolina, is hosting an all-family story time and book drive on August 22 in response to a recent controversy that led two area educators to resign from their positions amid parental complaints over a reading of the book King & King. The children’s book by Linda de Haan and Stern Nijland (Tricycle Press) features a prince who opts to marry a man instead of a princess.

As part of a lesson on anti-gay bullying this past April, third-grade teacher Omar Currie read aloud King & King, a book supplied by Meg Goodhand, the assistant principal at Efland-Cheeks Elementary. On June 15, following multiple formal complaints filed by parents about the reading, Currie and Goodhand resigned from their positions.

“We have had many customers who voiced their interest in the book as soon as news stories started coming out about the issue,” said Flyleaf children’s manager Johanna Albrecht, who is coordinating Saturday’s event. 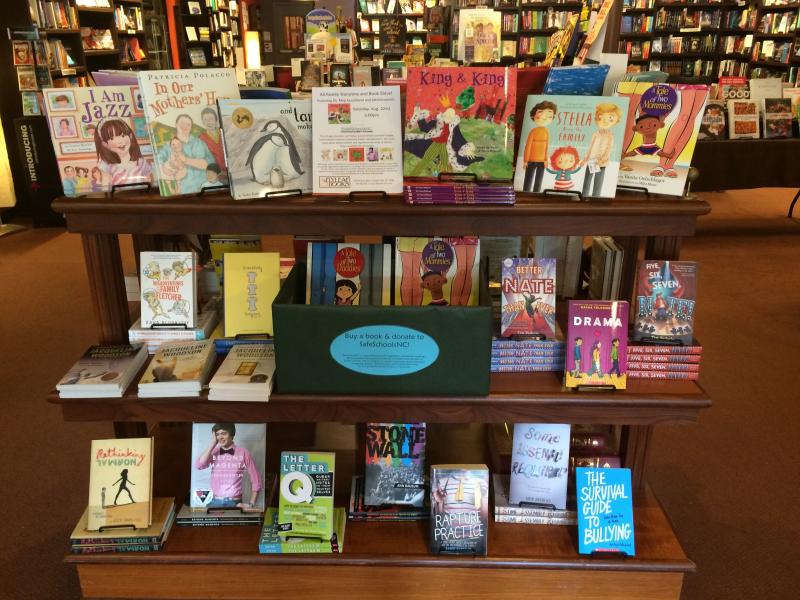 Flyleaf's display of titles for the event

In addition to bringing attention to titles for young readers that feature LGBTQ themes or characters and an anti-bullying message, the all-family story time will also feature a book drive to support SafeSchoolsNC. Goodhand serves as co-president of the nonprofit, which works to create safe and positive learning environments for students and educators statewide, with an emphasis on improving the school experience for LGBTQ youth.

Since the controversy, Currie and Goodhand have both been involved in a variety of well-attended community events in support of inclusive books in school curricula, including a panel at the Chapel Hill Public Library and a King & King read-aloud at The Regulator Bookshop in Durham.

“Though both chose to resign from Efland-Cheeks Elementary due to the lack of support they received from their district and superiors, they quickly found new jobs in other areas,” Albrecht noted. Currie has taken a new job in Virginia, and Goodhand will be working with nearby Durham County Schools.

At Saturday’s event, Goodhand will read aloud from King & King, and three board members from SafeSchoolsNC will read from other selected titles. Susie Wilde, a local children’s book reviewer and writing instructor, will also take part in the event, as well as Nathan Kotecki, a local YA author who has been a supporter of Flyleaf and of young writers in the community. (Currie is not attending due to his new, out-of-state job.)

Albrecht hopes to see plenty of children and their families, regular customers, area educators, and supporters of SafeSchoolsNC in attendance on Saturday. “I want this to be an all-ages event that supports SafeSchoolsNC with book donations and better awareness of what they do and a chance for all readers to be exposed to some of the great, diverse options available for readers of all ages.”

All books read at the event will be available for purchase and for donation to the SafeSchoolsNC program; donated titles will be distributed to teachers at a SafeSchoolsNC conference this fall.

Flyleaf, as both a business and as a member of the community, is in a unique position to draw attention to these sorts of issues, said Albrecht. “We do our best to support our community of readers by offering events and a space for conversation about issues of concern,” she said. “We’re especially sensitive to issues of free speech and literacy outreach to all ages.”