Four ABA members are opening branch stores within a few weeks of each other this summer: Carmichael’s Bookstore in Louisville, Kentucky; Village House of Books in Los Gatos, California; Green Apple Books in San Francisco; and Tattered Cover Book Store in Denver. 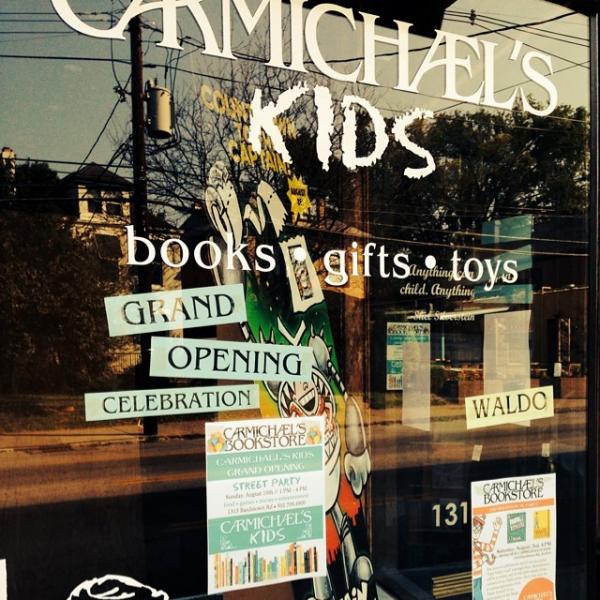 Carmichael’s Bookstore, which already has two locations in Louisville, Kentucky, will hold a soft opening for its newest store, Carmichael’s Kids, early next week, with a grand opening block party celebration planned for August 10.

The dedicated children’s bookstore, located at 1313 Bardstown Road, will carry kids’ books, toys, games, and puzzles and will be managed by Kelly Estep, who attended the ABC Children’s Institute in April to meet with fellow children’s booksellers and get tips about inventory and sidelines. The store opening is being funded in part by a grant from author James Patterson's $1 million giveaway.

Children’s books have been “a real growth area” for both Carmichael’s stores, said owner Carol Besse. “We believe in investing in young readers and encouraging kids to read, because they’re going to be our future customers.” Many of the store’s employees, including Estep, have children, so opening a kids’ shop “seemed like a natural way to expand.” 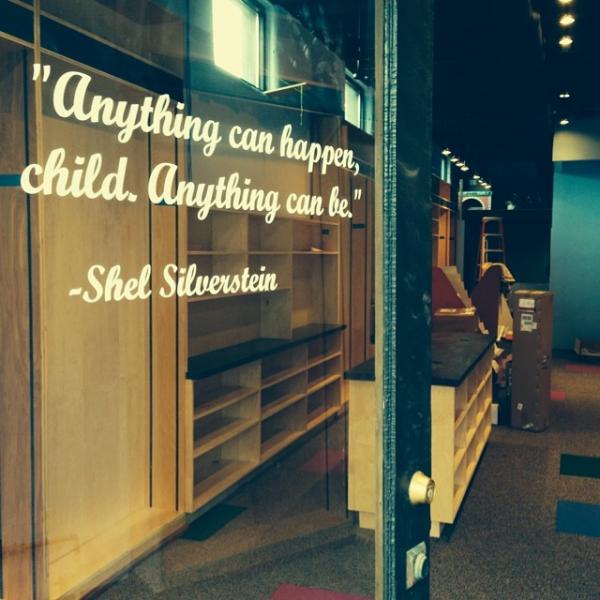 Carmichael’s Kids is adjacent to the Bardstown Road store and will be taking the entire children's inventory from the shop. The close proximity means booksellers can easily direct longtime — and new — customers looking for children’s titles just a few doors down. “It’s an idea that’s been germinating for quite a while, but finding the right physical space was the most important piece,” said Besse.

After the 1,000-square-foot storefront was secured in March, the space underwent a renovation, with Estep doing plenty of hands-on work, from painting to selecting the carpeting and lighting.

A street party and festival will take place on August 10 to celebrate the opening of Carmichael’s Kids. Along with the official ribbon cutting, attendees will enjoy performances by a local children’s theater, a live raptor show, an African-American marching drum core parade, and face painting, storytelling, music, and ice cream. “It’s going to be great fun,” said Besse. 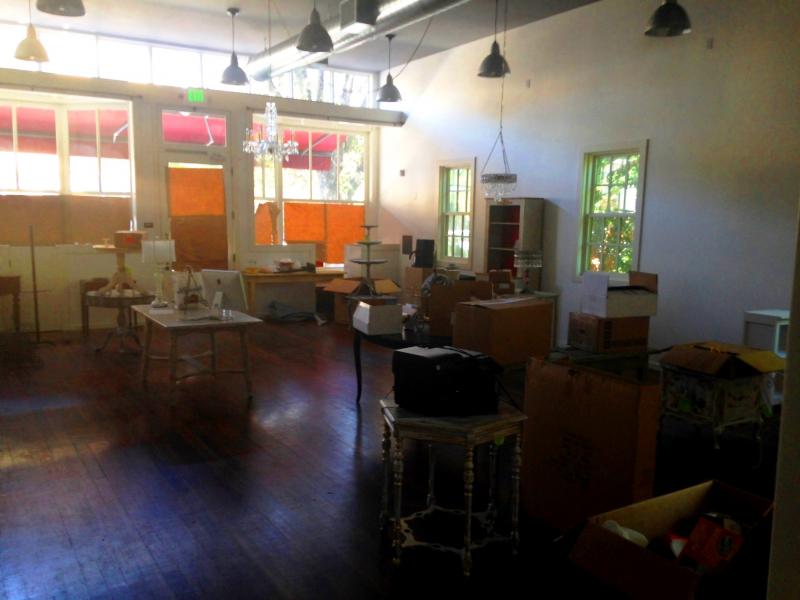 In Los Gatos, California, Cheryl Hare is looking forward to opening Village House of Books’ second location, at 21 West Main Street, in mid-August. The new Village House of Books will sit about a mile away from the current store, at the opposite end of the downtown, in an area known for its shops, restaurants, and live music.

The original Village House of Books, opened by Hare and her husband, Steve, in 2013, is just 800 square feet, so Hare is very happy to be opening the new store in a 1,400-square-foot space. The inventory at both will be similar, but the new store will carry much more. “We just don’t have the room to expand on our titles or genres here, and we definitely would like to add some more titles and sidelines,” said Hare.

The décor of the stores will also be similar. “We’re finding out from our customers that they love the look of the current store because we brought in antique furniture. It basically looks like a home, so we’re going to mimic it,” said Hare. “We’ll give it the same kind of feel. There are antique armoires and chairs that give it a very homey feeling, and we’ve installed some antique chandeliers.” 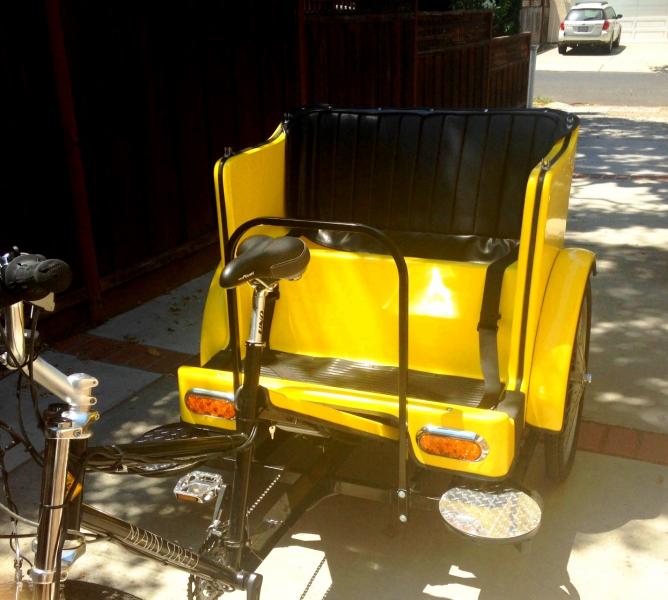 The new location will be exposed to more foot traffic than the original store, and Hare and her husband are planning to use a branded pedicab to transport customers between locations and to get the word out about the new venture. “We have one that’s our store colors — yellow and black and off-white — and it’s called the Village House of Books Buggy, so it’s going to be driven around town to bring people to the stores,” said Hare, who noted that the transport will be especially handy when a customer is looking for a title that’s at the opposite store.

Hare is also spreading the word about the new location on Facebook and Twitter, through an ad in the Los Gatos Weekly Times, and by word of mouth. “It’s funny — here in town, word gets around very, very fast, which is awesome,” she said.

With an August 1 target date for opening, Green Apple Books on the Park’s store manager Stephen Sparks has his fingers crossed that all will be ready by tomorrow.

“Green Apple Books on the Park is literal: we’re spitting distance from a major thoroughfare into Golden Gate Park, so foot traffic, especially during tourist season, is significant,” said Sparks. The store, located at 1231 Ninth Avenue, will offer an inventory of primarily new books and some used books in less than 2,500 square feet, which is significantly smaller than Green Apple on Clement Street.

Merchandise will include some items that sell well on Clement Street, “but we’re also looking for unique items,” said Sparks, who noted that the aim is to “keep the best, most idiosyncratic, most Green Apple-y books on the shelves at this store. 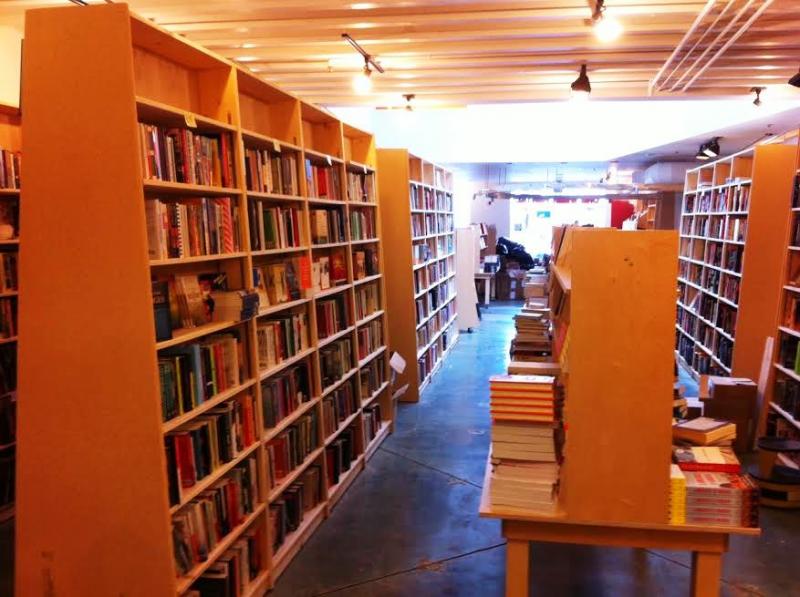 “In a nutshell, we hope to be a great neighborhood bookstore, but also a destination bookstore.” Plans are in the works to host book clubs, which Green Apple doesn’t have space for on Clement Street, and to form partnerships with neighborhood organizations, such as the California Academy of Sciences and University of California, San Francisco.

Green Apple Books on the Park will welcome customers to a soft opening on August 1, and a midnight release party for Haruki Murakami’s Colorless Tsukuru Tazaki and His Years of Pilgrimage (Knopf) will bring additional attention on August 11. An official opening party will come together in the fall, “once we’ve worked out some of the kinks and are not too exhausted from all the hard work to enjoy it,” said Sparks. Details on the opening of the store can be found on Twitter and Facebook. 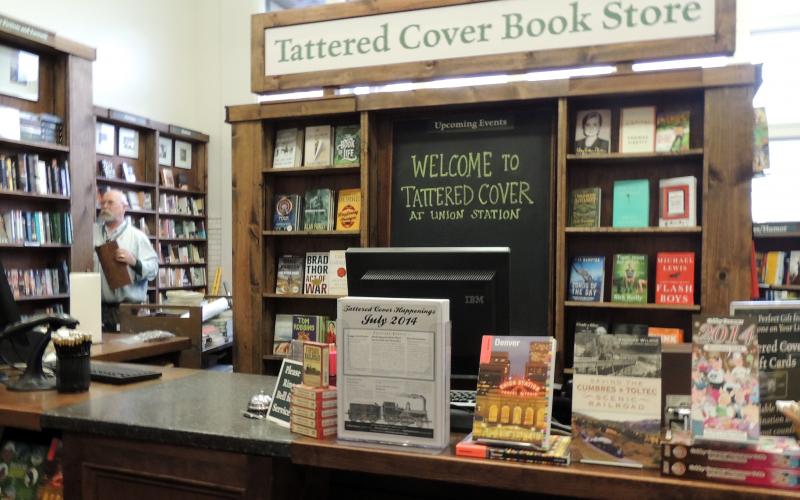 At Denver’s recently renovated Union Station, Tattered Cover Union Station opened its doors on July 26. The station, which brings together bus and commuter, light, and Amtrak rail services in one central hub, features the historic Crawford Hotel, restaurants, and shops.

“We are looking to serve the many facets of the community that this project provides, like hotel guests, restaurant patrons, commuters, train travelers and tourists, and the general population of the Denver area,” said Tattered Cover general manager Matt Miller.

With just 922 square feet, Tattered Cover Union Station has a smaller inventory than its three sister stores in the Denver Metro Area — on Colfax Avenue, in historic LoDo, and at Highland Ranch — which range in size from 13,000 to 24,000 square feet. “Interestingly, when Joyce Meskis bought the Tattered Cover in 1974, it was 950 square feet,” said Miller. 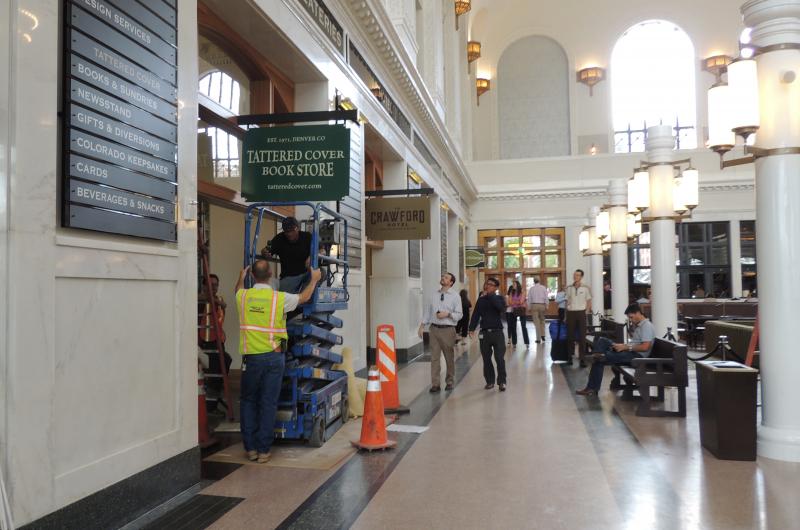 Tattered Cover Union Station, which is kitty-corner to the LoDo store, carries new releases, fiction, nonfiction, paperback, and hardcover titles, as well as backlist, mystery and science fiction, and children’s and YA books. “And as you might imagine, we have books on Colorado travel and history and my favorite section called Trains in Fact and Fiction,” said Miller. The store is rounded out with sidelines, sundries, magazines, newspapers, and snacks.

Just a few days into business, “We’ve been very pleased with the sales so far,” said Miller.

Tattered Cover also has three satellite locations in Denver International Airport, on Concourses A, B, and C, under a licensing agreement with Hudson News.