The Furry Faces of ABA: An Overview of Staff Pets

Recently, Bookselling This Week spoke with members of the American Booksellers Association staff to find out about the pets they own, which include dogs, cats, a fish, and even some plants! Below are some of the adorable pets the ABA staff come home to after a day at the office:

Tux, cat owned by Ryan Quinn, IndieCommerce Specialist: “Tux is the older of the two. His nickname (one of many) is Peeps, because when he was a kitten, he would stick his head past the shower curtain watch while you were showering until you were finished. He loves to be cuddled and told he’s handsome, has never met a blanket he didn’t love, and once he gets in your lap, you’re his hostage for hours...regardless of how many other things you should be doing or how badly you have the urge to move.” 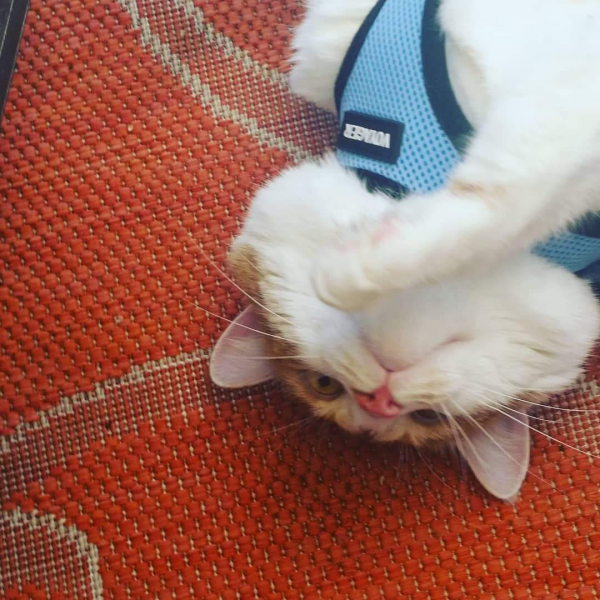 Toby, Quinn’s other cat, “is otherwise known as The Tiny Terror and Bitey Boy. He frequently gets into mischief and likes to express himself through his teeth, but I wouldn’t trade him for the world. When he climbs up, tucks his head beneath my chin, and lets out a little huff of contentment, it’s all worth it. He also loves to hang out on the terrace. In this picture, he’s just chillin’ on his back staring up at the birds.” 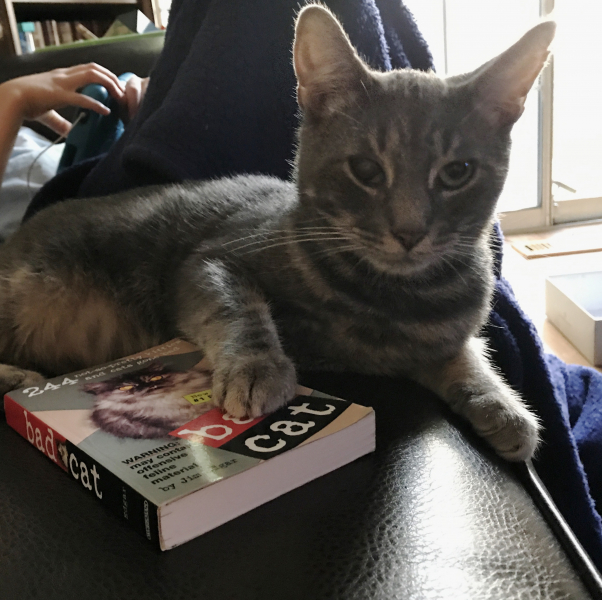 Max, cat owned by Melissa Napolitano, Graphic and Web Designer: “We just adopted him a month ago. He is about one-and-a-half years old and is blind in his right eye. He likes being in our company and is always seeking our attention. He’s very playful and apparently likes to climb up my curtains.” 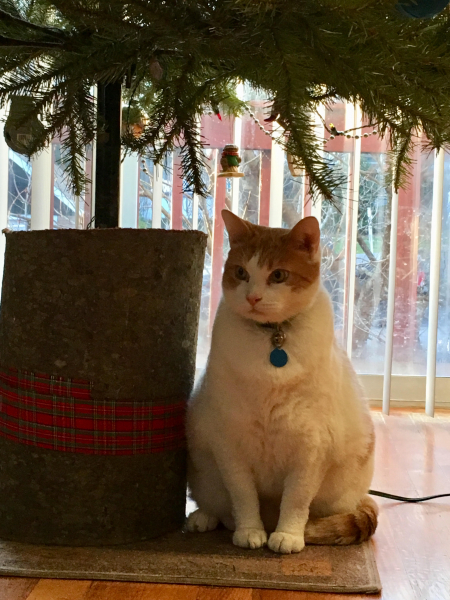 John, cat owned by Pete Reynolds, Project Manager: “My family’s two cats at home are John and Mittens. We adopted John seven years ago at a Best Friends adoption event in White Plains, New York. He, along with his brothers, Paul, George, and Ringo, lived at a shelter in northern New Jersey. His brothers had been adopted earlier in the day, and so we just had to adopt John! He is just the sweetest cat, and we’re so happy to have him in our family.” 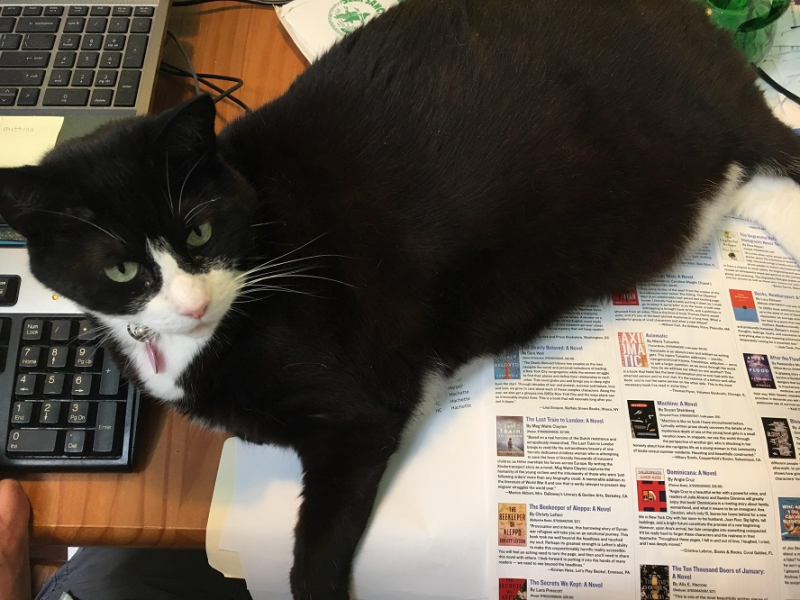 Mittens: “Mittens was part of a litter of very young kittens someone had left in a box outside of a local supermarket almost six years ago. When we brought her to the vet to be checked out, we were told she was taken from her mother too early, and we would need to bottle-feed her. And, so we did! As you can tell by the picture, she’s now eating on her own quite well, and loves to keep me company when I’m working from home!”

Nemo, goldfish owned by Greg Galloway, Director of ABA Technology: “Nemo, the Galloway family goldfish, is approximately five years old. He loves to swim in and out of his pineapple and watch the family enjoy breakfast around his aquarium in the kitchen. As far as we know, he cannot read.” 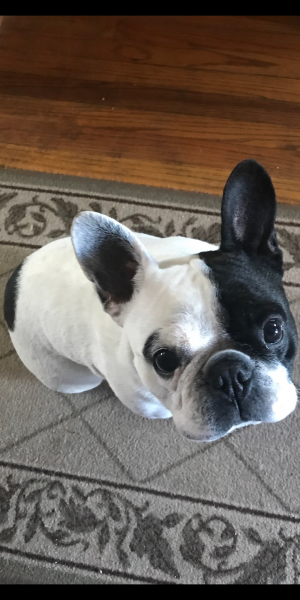 Hazel Mae, dog owned by Emily Behnke, Junior Writer/Researcher: “Hazel Mae is a French bulldog. She’s afraid of thunder and fireworks, but likes to roll in the grass and bark at other dogs from the safety of the porch.” 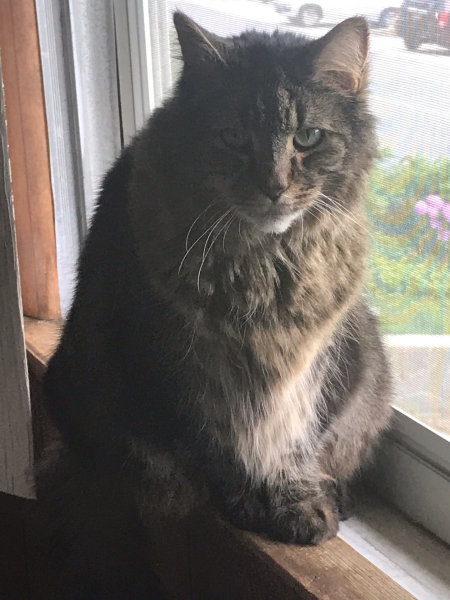 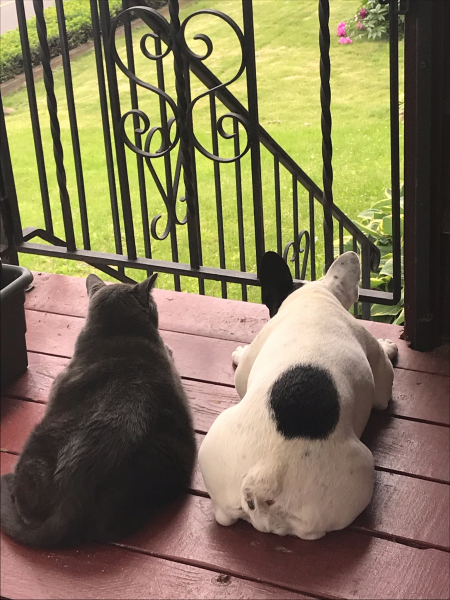 Vlad: “Mr. Ramone (fluffy, possibly part Maine Coon) and my other cat, Vlad (gray, pictured with Hazel Mae), are half-brothers from different litters. Mr. Ramone likes to steal hair clips to make nests, and Vlad has made friends with every dog on our street.” 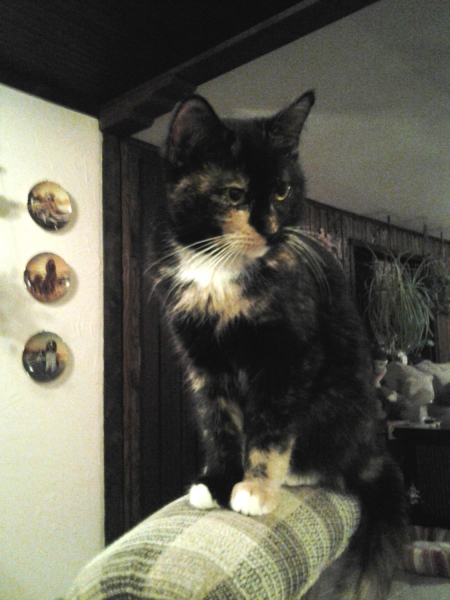 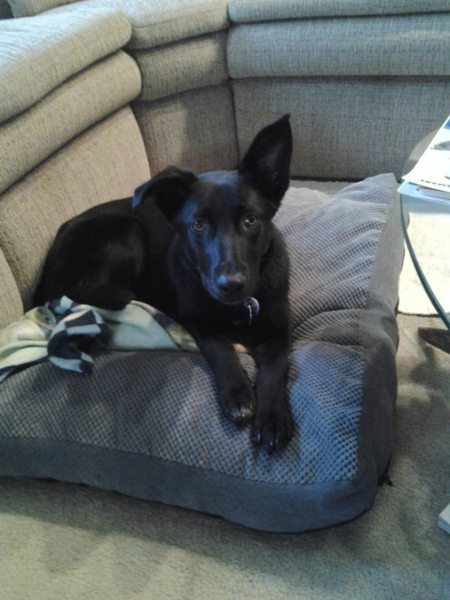 Also owned by Ford, Reese is a one-year-old German Shepherd/Black Lab mix who goes by the nickname Reeses Pieces and is “highly addicted to playing with tennis balls.” Said Ford, “One evening I’m watching TV and Reese comes out of the bedroom with something in her mouth. I immediately know that this is definitely not good. I tell her to drop it, which she does. Turns out she had one of my 14k gold necklaces that Cici had knocked off my dresser! This was her way of telling me that Devil Kitty was at it again!” 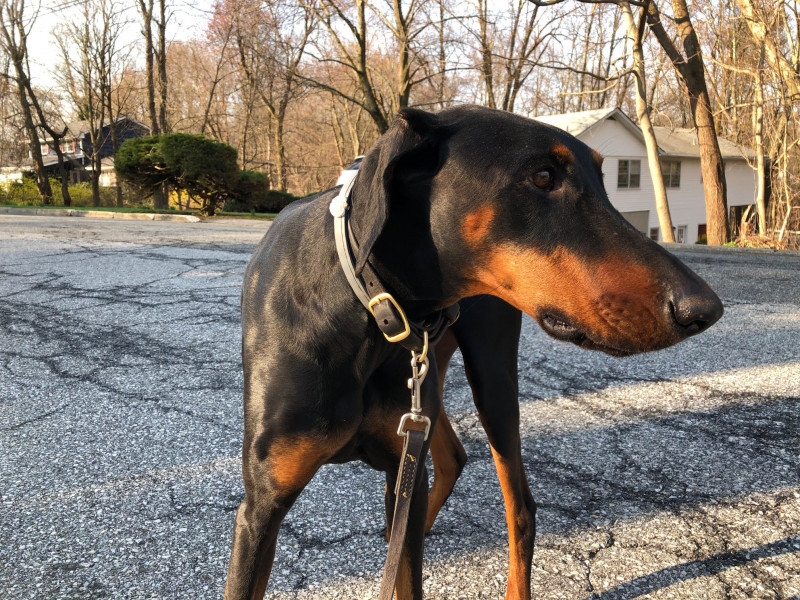 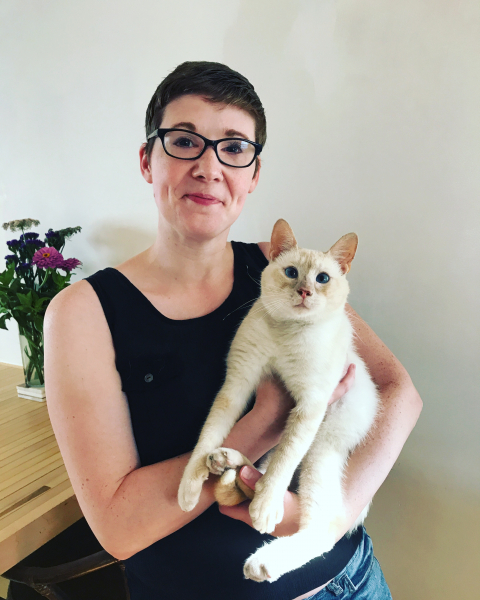 Bartleby, cat owned by Sydney Jarrard, ABA Content Director: “Bartleby (named after Melville’s ‘Bartleby, the Scrivener’) was a stray cat roaming the fields of Columbia County, New York, until just a few months ago, but has settled in nicely to his cozy, book-filled home. And, yes, we’re twins.” Follow Bartleby on Instagram. 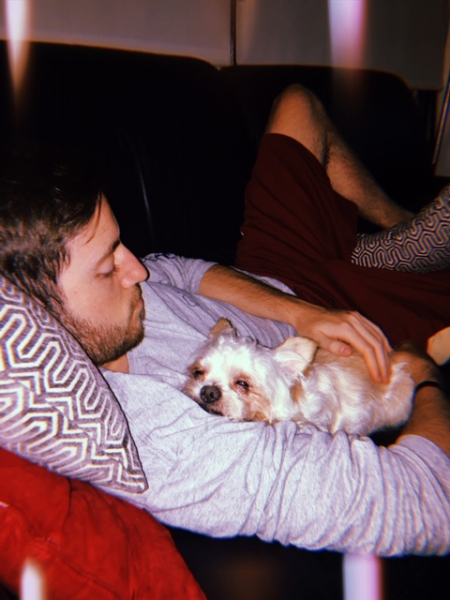 Rocky, dog owned by Phil Davies, IndieCommerce Director: “This is Rocky McDavies. He is a rescue dog from Texas that my son Adam and his friend Catherine adopted this past weekend. He’s a six-year-old Shih-Tzu/Yorkshire Terrier mix and he’s got a BB lodged in his left rear leg where someone shot him. In this photo from August 10, he has just arrived at his new forever home in New York after being in a transport crate for seven hours. Rocky is doing well and enjoys meeting new dog friends at the park near his home in Long Island City. Evidently, when your kids adopt a pet, you become grandparents who are obliged to doggy sit when needed. My wife, Lauren, and I hope this happens frequently.” 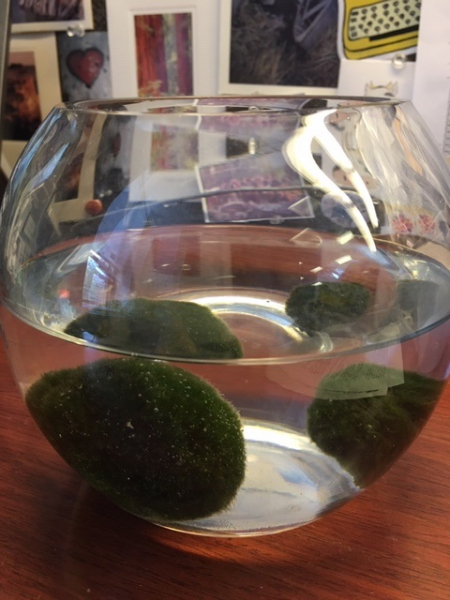 Mosses, Jill Perlstein, Meetings and Planning Officer: “I’ve had all sorts of pets: cats, dogs, an African pygmy Hedgehog named Xena Warrior Princess Hedgehog, even a Pet Rock. Recently, I adopted two balls of moss from my colleague, Gen de Botton. These green, fuzzy plants are low maintenance and only need the water changed every two weeks or so. Given my hectic schedule and tiny apartment, we seem to be perfectly suited for each other. My plan is to keep them on my desk at ABA for all to enjoy.” 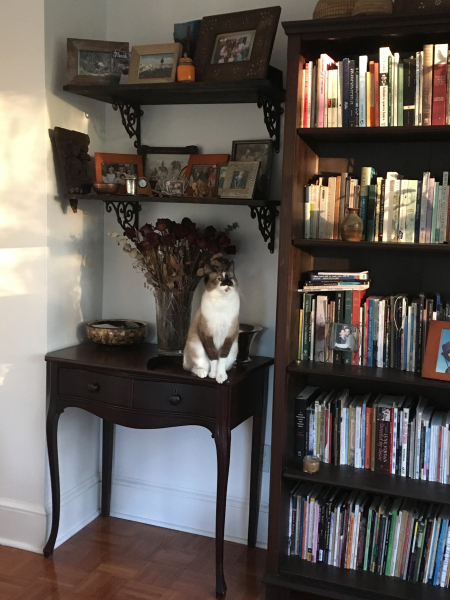 Minou, cat owned by Elizabeth Roberts, Member Relationship Manager: “Age four, AKA Pickle, Nou-Nou, French Fry, Minoushka. Diabolical cat whose cuteness saves her daily. This trouble-making goofball and utter spaz plays fetch, terrorizes her sister, destroys pillows, and tries, regularly, to eat people. Is barely safe to approach unless she’s sleeping (during which time she is in fact deliciously sweet and will even allow belly kisses, for precisely 7.3 seconds).” 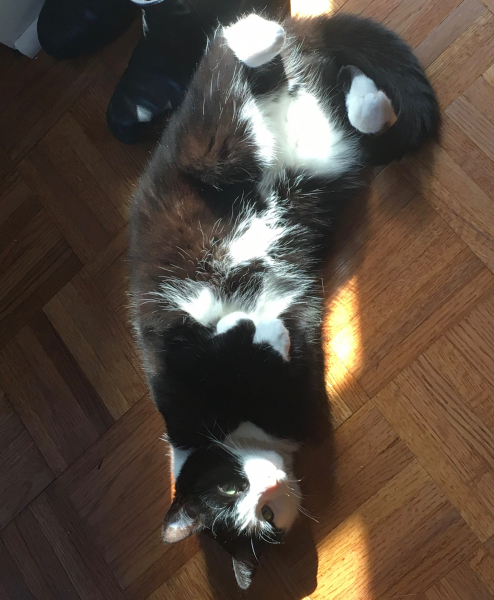 Ducky: “Age 12, AKA Duckling, Ducky-Doo, Doodle, Lu-Lu, Lu. Permakitten with invisibility cloak. Only her cohabitants can see her. Total fraidy-cat. Not a naughty hair on her. When she thinks everyone is asleep, including her impossible little sister, she runs around the house and plays with twist-ties. She’s all about the face love and I sometimes fear she will hurt herself with the hard head-bonks she gives.” 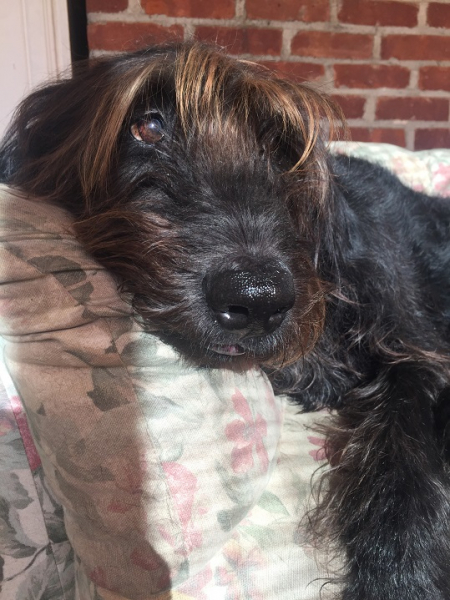 Scout, dog owned by Kate Brennan, Membership and Office Assistant: “Scout is a five-year-old Schnauzer/Labrador mix. My family rescued him as a puppy and soon discovered that he requires a lot of attention and belly rubs. Scout has a calm personality but never misses an opportunity to play fetch. As soon as someone curls up with a good book, Scout is ready to cuddle and hear a story. My sister recently read to him parts of The Art of Racing in the Rain by Garth Stein. I have a feeling he is excited to see the movie.” 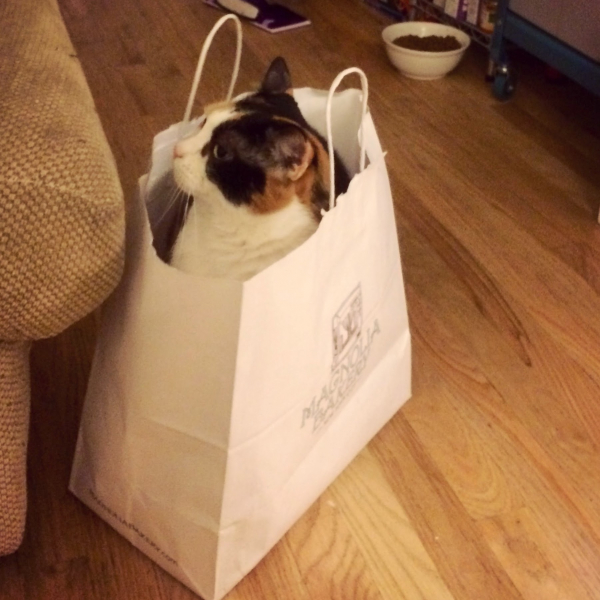 Gato, cat owned by Josh Harding, Systems Administrator: “I have a calico cat of unknown age named Gato. I got her from a previous owner and her name is technically Taffy, but I never liked it, so I started calling her 'Cat,’ which eventually became Gato. Her hobbies include napping on my chest when I’m reading, manically running in circles on my bed in the middle of the night, and burrowing into the warmest spot in the house at all other hours.” 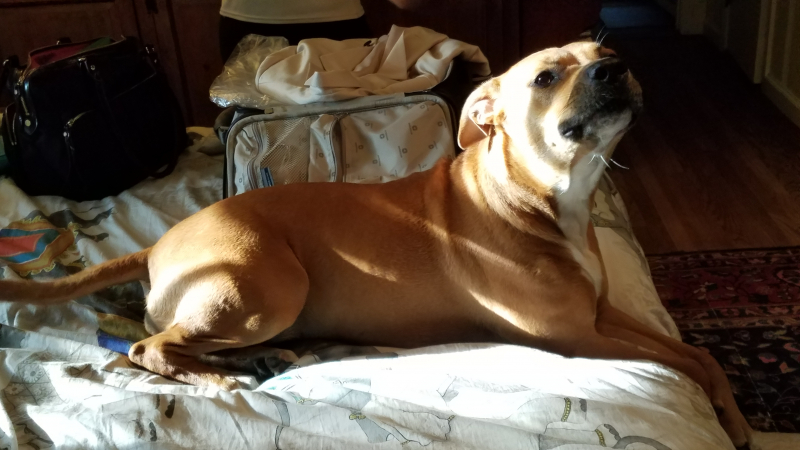 Chiva, one of three dogs owned by Joy Dallanegra-Sanger, Senior Program Officer: “This is Chiva. She’s two-and-a-half. She is really my daughter Carmean’s, but we are raising her since Carmean can’t have her where she is.” 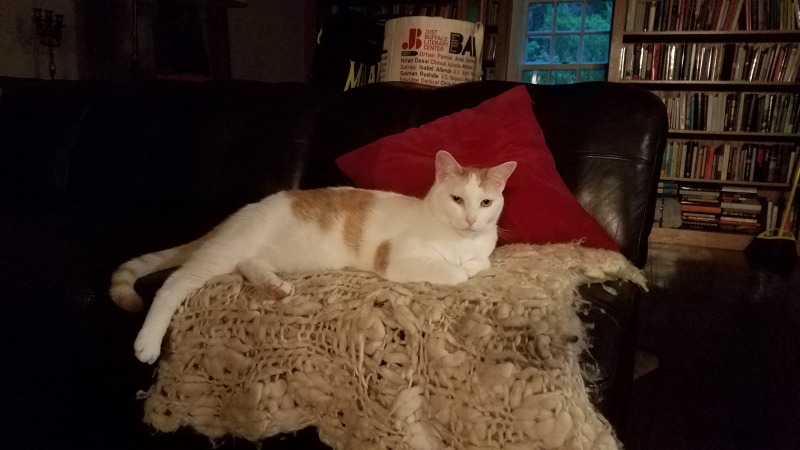 Quincy: “He is really a puss-in-boots. Funny and good at training dogs to respect cats.” 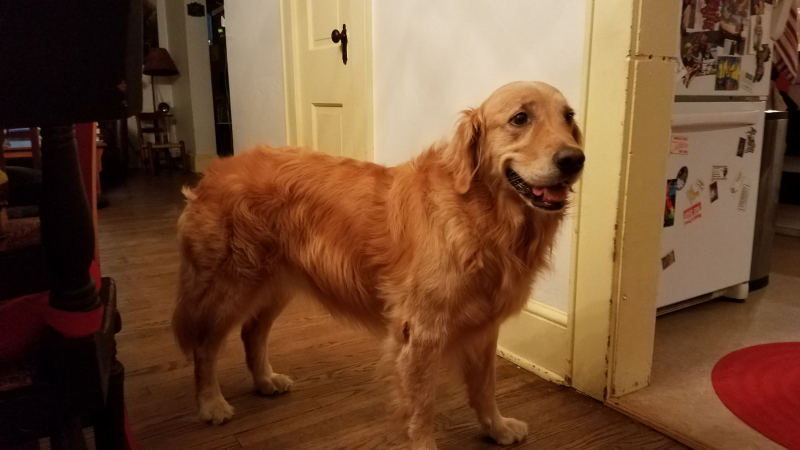 Maisy: “She is most lovable and came to us via [former ABA staff member] Meg Smith and ABA Senior Education Manager Lisa Winn.” 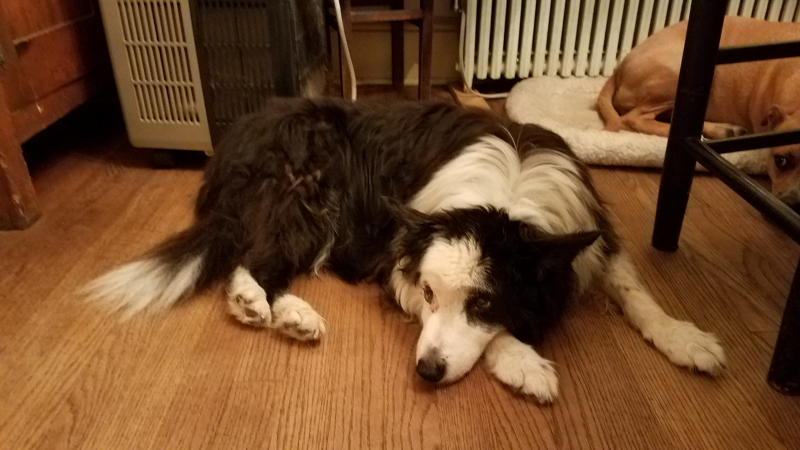 Airy: “This is our 15-and-a-half-year-old border collie. She’s indomitable.” 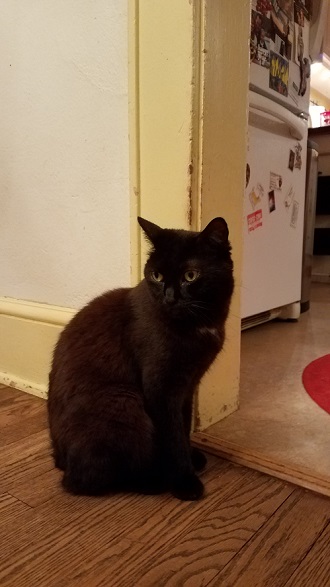 Minx: “Minx was rescued from the street in the city after Hurricane Irene. She’s tiny but she’s got mitten front paws with seven toes on one foot and six on the other.” 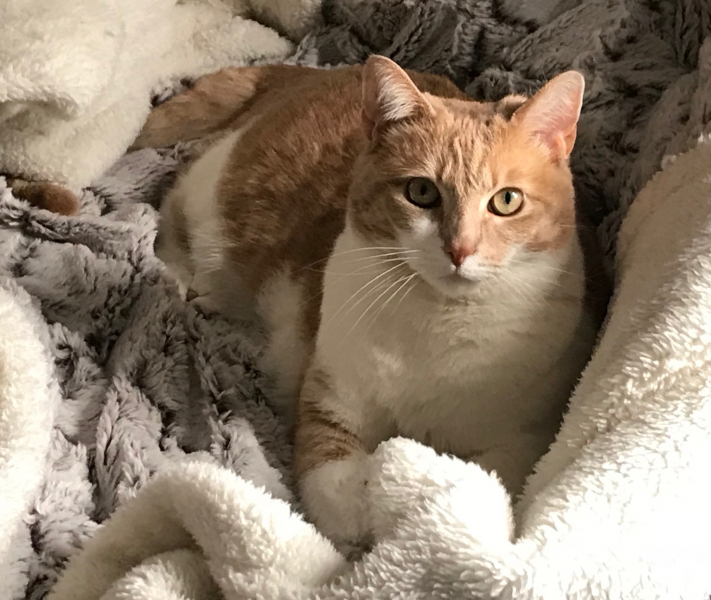 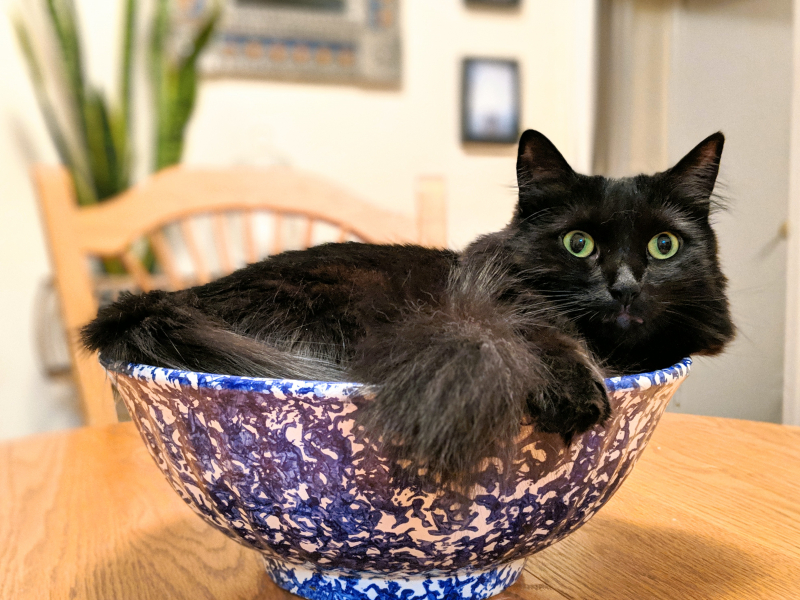 Suki, cat owned by Gen de Botton, ABC Children's Group Manager: “As the eldest, Suki is the pinnacle of floofy perfection and does a spot-on slow loris impression when you scratch her armpits. Fanny’s Dream by Caralyn Buehner makes her cry every time she reads it. Her favorite spot in the house is any vessel that is slightly too small for her. Suki wants everyone to admire her tail. She has perfected smiling with her eyes.” To see more of Suki’s adventures, follow #ThunderFloof on Instagram. 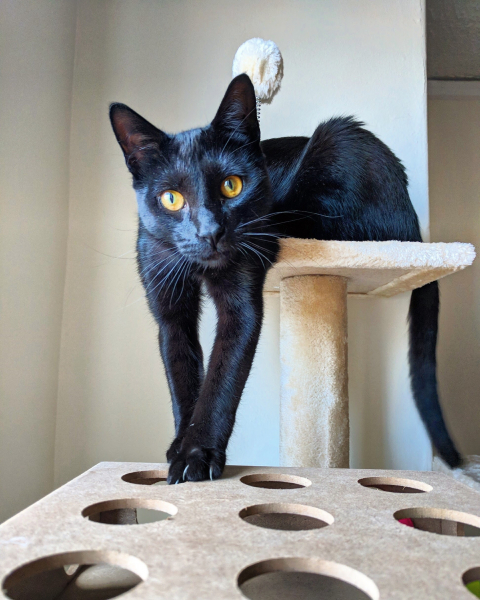 Emmett is fluent in Russian and spent the majority of the summer reading Tolstoy. Just kidding. Emmett prefers the Brontës and likens himself to Rochester, but he is more akin to Heathcliff. Emmett’s favorite hobby is catching bugs and letting them fly around in his mouth before he eats them (see... definitely a Heathcliff). To see more of Emmett’s adventures, follow #DammitEmmett on Instagram. 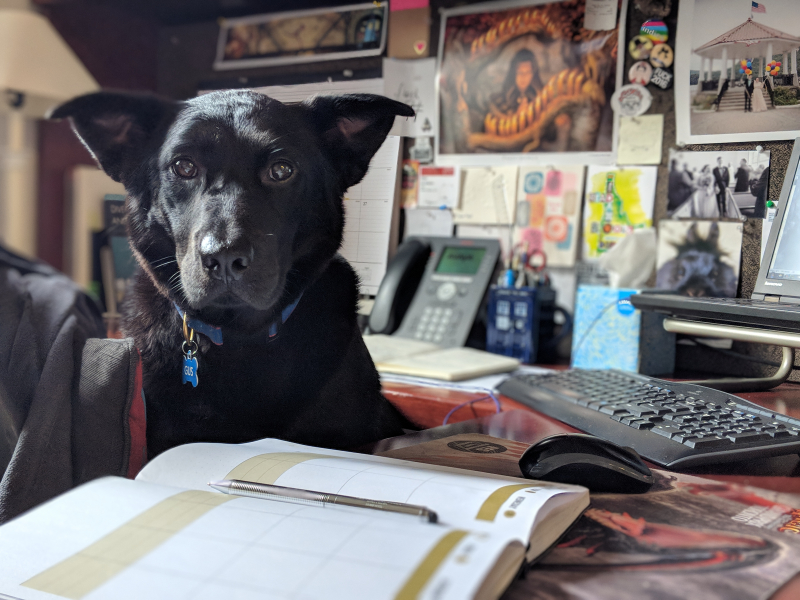 Gus is the perfect combination of a Corgi and something else, which results in dog perfection. He was adopted at three years old. We know nothing about his past, but that’s okay, he’ll tell us when he’s ready. Gus is the leader of the ABA office’s chapter of the Order of the Phoenix. He is a Hufflepuff. His favorite foods are French fries, French toast, and French bread. He would like to summer in the South of France. To see more of Gus’ adventures, follow #LoveandHappyGus on Instagram. 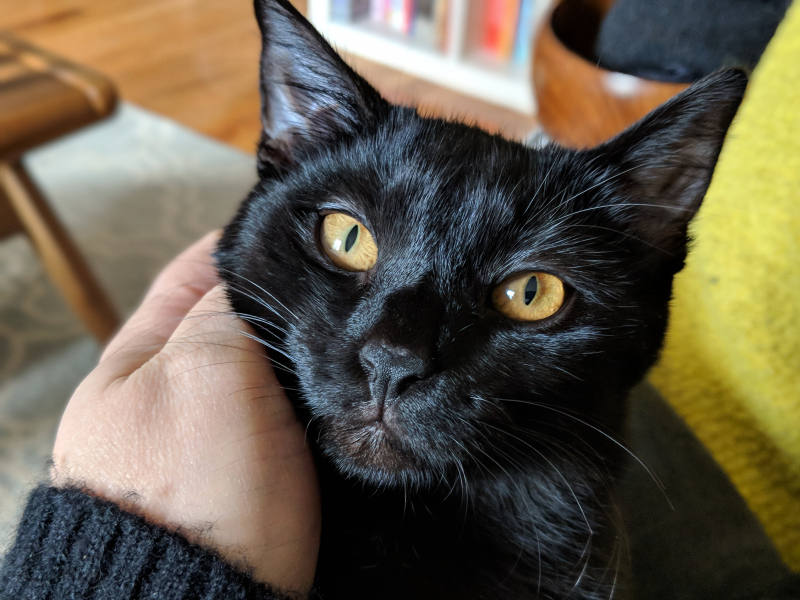 Penny, the youngest, is an idealist with aspirations of being purrsident someday. Anne Shirley is her hero. Sometimes we call Penny 'Cordelia.’ Her favorite hobby is talking to shiny reflections on the wall, and reciting Tennyson’s The Lady of Shalott. Penny is in love with Gus. To see more of Penny’s adventures, follow #PennyYoungThing on Instagram. 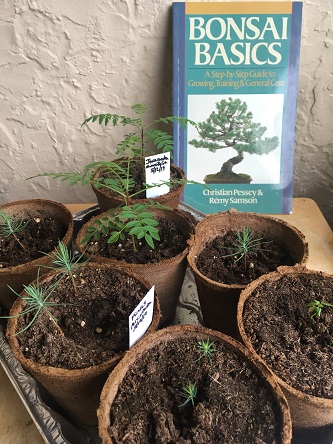 Bonsai, Jess Stauffer, Program & Development Coordinator: “While I don’t have a pet right now, I do have a small selection of baby trees I’ve grown from seed, with the intention of training them into bonsai when they’re old enough. They’re still little enough to want me to read to them after I tuck them in at night, and they’re really enjoying A Tree Grows in Brooklyn.” 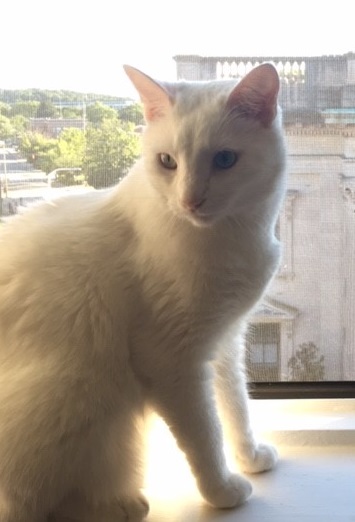 Benjamin (aka Benny), cat owned by Lauren Anastasio, Membership and Database Assistant: “Benny is a four-year-old short-haired, all-white cat with two different color eyes (one blue and one yellow). I adopted him from the Connecticut Humane Society when he was a tiny kitten and he’s been causing mischief ever since. He is not a fan of reading, and will often get upset when I’m reading instead of playing with him. But he does love book boxes, napping, and taking naps inside of boxes.”