Bookstores around the country are hosting parties on Saturday, July 30, and Sunday, July 31, to celebrate the release of Harry Potter and the Cursed Child Parts I & II, the official script book for the stage play, which is now in previews.

The play, which is based on a new story by Harry Potter series creator J.K. Rowling, Jack Thorne, and John Tiffany, will premiere in London on July 30, and Scholastic’s Arthur A. Levine Books imprint will release the script’s print edition at 12:01 a.m. on July 31. The Cursed Child will be released simultaneously in e-book form by the Pottermore digital imprint.

Alice Hutchinson, the owner of Byrd’s Books in Bethel, Connecticut, is inviting customers to celebrate the release of The Cursed Child beginning at 11:30 p.m. on July 30 with cake, costumes, and prizes, including mini and full-size Harry Potter puzzles, Harry Potter coloring books, assorted books in the Harry Potter series, and stuffed owls and dragons for “adoption.”

July 30 will actually be a day of double-duty for Byrd’s, which will hold its wrap-up party for the month-long Find Waldo Local campaign, sponsored by Candlewick Press and the American Booksellers Association, earlier in the day.

“This is our first Harry Potter party, since we have only been open four and a half years, so we are excited about the possibilities,” said Hutchinson. “My son, Steve, who works at the store, was the same age as Harry as the books came out, so he has grown up with Harry. We are all excited!”

“We will be dressed in Harry Potter gear,” added Hutchinson. “I have my graduation robe and I hope to have found a witch’s hat by then. Trivia winners and those who pre-order the book will get extra tickets for door prizes, which will be pulled around 12:30 a.m. on the 31st. We’ll also have buttons to hand out to early attendees.”

In Austin, Texas, the staff at BookPeople is dusting off the store’s old Diagon Alley set from previous Harry Potter release parties to stage a mini-festival in the store’s parking lot. The party, which begins at 10:00 p.m. on July 30, will feature a costume contest, trivia, and a House Cup Tournament, including a Quidditch challenge, as well as a cast of Potter characters who will interact with guests. The Diagon Alley set-up will also include local food vendors and an onsite appearance by members of The Typewriter Rodeo, who will type up poems in the style of each of the Hogwarts Houses.

The Odyssey Bookshop in South Hadley, Massachusetts, is throwing a Saturday night release party with the theme “Hogwarts Class Reunion.” Guests can pretend to be part of the class of 1998 (Harry’s class year) or 1978 (Harry’s parents’ year).

Throughout the evening, guests will don their house colors and school robes while earning points for the Reunion House Cup. They can take home swag by playing games and picking up giveaways, take part in a costume contest, and raise a glass for a butterbeer toast. The “reunion” will also feature a pop-up Ollivander’s Wand Outlet, a trivia contest, a “find the golden snitch” challenge, and a photo booth.

Guests at Odyssey’s celebration can indulge their nostalgic side even further with activities like the Hogwarts Memories Wall, where they can add pictures of themselves from earlier Hogwarts days or write down their favorite Harry Potter memory. They can also check out Professor Slughorn’s Notable Alumnae Board to see what famous alums, such as Hermione Granger ’98, are up to, or view a memorial for lost members of the Class of ’78, including Harry’s mom, Lily Evans Potter, and Severus Snape.

Laurie Gillman, who owns the East City Bookshop in Washington, D.C., said her store, which opened on April 30, is having two parties to mark the occasion of the script’s release. First, on the evening of July 30, the store will host a midnight party for all ages, featuring wizard-inspired libations, a selfie booth with props, and prizes, as well as an advanced-level trivia contest.

Then, on the afternoon of July 31, East City will host a special birthday party for Harry Potter for children ages four to 12 years old, featuring costumes, prizes, the Hogwarts Sorting Hat, Hogwarts House cupcakes, and a read-along from Harry Potter and the Sorcerer’s Stone: The Illustrated Edition. The Harry Potter movies will also be playing throughout the evening and day of the 30th and 31st.

Keeping in mind that the first Harry Potter book was published in 1998 and the seventh and final novel in the series, Harry Potter and the Deathly Hallows, came out in 2007, Gillman said she has arranged it so that each event targets the appropriate audience.

“We are thinking that the people who will be most excited about the play’s release are older — late teens, early 20s, and up, the original readers who read the books as they were released and their parents who read along with them,” said Gillman. “And since it will be very late, the party will have a very different vibe than the one for younger kids. However, with all the hoopla around the release, we didn’t want to leave out younger Harry Potter fans, so we’ll have a daytime party with cake to celebrate Harry’s birthday.” 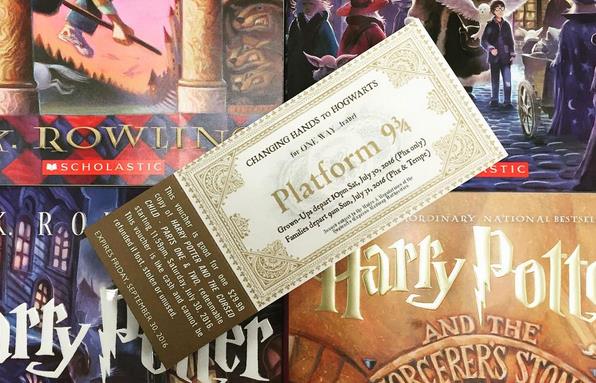 “As a store, we’re still very new and a little bit in seat-of-our-pants mode, but with a staff full of devoted Harry Potter fans and a perfect excuse to celebrate all things Harry Potter, we feel like we have to go all out,” said Gillman. “As far as doing two events, because the opportunity won’t come up very often, we will just have a good time, enjoy hosting our community, and be tired for a few days afterward!”

On Saturday night, grown-up muggles, wizards, and witches will be invited to First Draft Book Bar, the wine, beer, and coffee bar inside Changing Hands in Phoenix, Arizona, to celebrate the midnight release of Harry Potter and the Cursed Child. Guests will enjoy Tabletop Quidditch, a Care of Magical Creatures game, expert-level trivia, fortune-telling, and a costume contest, as well as a Potter-inspired menu, including alcoholic Butterbeer and PolyJuice Potion, non-alcoholic Butterbeer Floats, Pumpkin Pasties, and more.

The next day, Changing Hands in both Tempe and Phoenix will hold release parties for families, featuring crafts, activities, and snacks. Pre-orders of the book will get guests their own commemorative Hogwarts Express ticket, which is good for two admissions to the adult party on Saturday and/or four admissions to the family party on Sunday.

“People are galvanized and excited,” said Changing Hands marketing manager Brandon Stout. “The Phoenix store has only been open two years, so we’ve never done two parties at once before. The main impulse behind doing an adult-oriented party is that the readers who grew up with those books are now of the age where, although I think a lot of them would still like to come to a general Harry Potter release party, if it is an event where there is booze involved, they will be more inclined to relax and bring their fellow Potterheads; you don’t have to feel as corny.”

“When we announced the First Draft party on social media, it exploded,” said Stout. “Book orders started pouring in online and by telephone. It spread like crazy.” Though the initial plan was to close the store after midnight, when the First Draft party was scheduled to end, Stout said they will now be keeping the store open for as long as the party lasts.

Since the ticket functions for all three parties, it’s hard to get a fix on who is coming to which party, said Stout, but on the Facebook page for the First Draft party, more than 1,500 people have expressed interest in coming and over 300 have indicated that they will definitely attend.

“It’s so popular, we’re getting a little nervous. We want it to live up to people’s recollections of what these parties were like when they were kids,” Stout said.

Scholastic has also rolled out a website where people can type in their zip code, city, or state to find the Cursed Child release party nearest to them. Booksellers and librarians can contact Scholastic to get their own party listed.