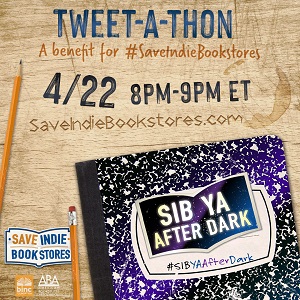 Author Isaac Fitzgerald told Bookselling This Week that since #SaveIndieBookstores was announced, he’d been thinking of ways he could help. He wanted to donate, but money, he said, has been tight. Then, Cathy Berner of Blue Willow Bookshop in Houston, Texas, came to him with an idea, and the American Booksellers Association worked with Berner to brainstorm authors to invite as well as with Binc to coordinate donations.

#SIBYAAfterDark, a tweet-a-thon benefiting #SaveIndieBookstores, took place on Wednesday, April 22. During the event, young adult authors gathered on Twitter for an Ask Me Anything (AMA). Followers were encouraged to donate directly to the #SaveIndieBookstores fund.

The event, he noted, was a team effort. ABA’s Gen de Botton helped brainstorm the idea, and ABA’s Melissa Napolitano came up with “the kick-ass graphics.”

Fitzgerald told BTW it was a huge success, noting, “Once it ended, I had so many authors and readers reach out to ask how they could help and get involved. Having so many stellar YA authors involved definitely piqued folks’ interest.”

He added that the event also raised $6,801 for the #SaveIndieBookstores campaign. “I had told myself that if we had managed to raise $5,000 I would be over the moon, and $1,000 would’ve made me plenty happy,” he said. “So $6,801? Incredible. And then to hear that it was $13,602 after Rick and Becky Riordan’s ridiculously generous matching pledge? Right then and there I did a little happy dance in my kitchen.”

Fitzgerald, who made a video dedicated to explaining the campaign’s importance, said that in terms of donating, every little bit helps. “Nobody understands that more than me,” he noted, “a person who can only financially afford to give very little right now. But if you’re a reader who loves books, you know how important indie bookstores are to both the publishing world and our local communities. And if you’re an author with some money to spare, well, then stop lollygagging and give some damn cash to the people and places that push your books and help support your career.”

He added that those who aren’t able to donate right now should also reach out to learn about other ways to become involved. He told BTW, “Every single donation raised will add up quick, and we all want independent bookstores — as well as the incredible, beautiful, wonderful, galactically super smart booksellers who make these stores so special — to come out on the other side of these difficult times so we can all get back to doing what we all do best with whatever comes after *gestures at everything*.”

The #SaveIndieBookstores campaign runs through April 30. Learn more about how to donate here.