Former Secretary of State Hillary Clinton spoke about life after the presidential election and discussed her upcoming books at this year’s BookExpo trade show on Thursday evening in New York City. 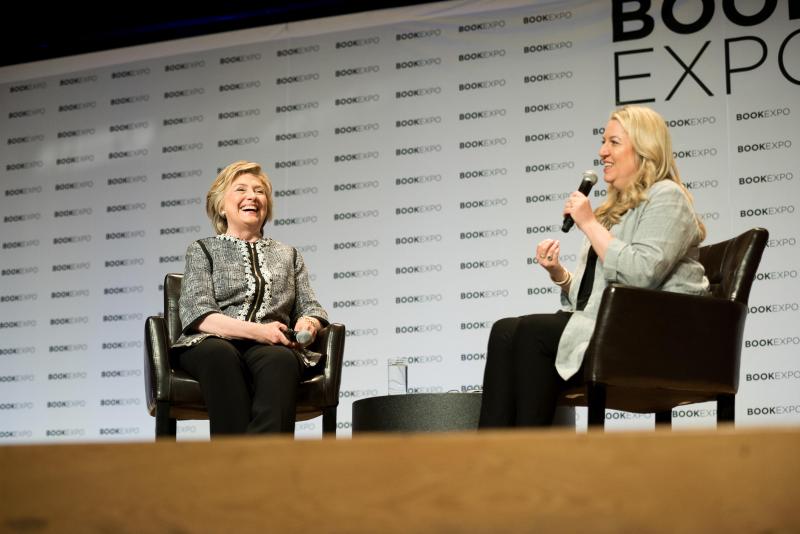 Following an introduction by her publisher, Simon & Schuster President and CEO Carolyn Reidy, Clinton took the main stage at the Javits Convention Center to be interviewed by Cheryl Strayed, author of the bestselling memoir Wild, Tiny Beautiful Things, and Brave Enough. Strayed started off “An Evening with Hillary Rodham Clinton” with a touching question from the audience: “Do you know how much you mean to us and how much we love you?”

Clinton warmly accepted and returned the compliment to the booksellers in the room. “I have to tell you, as booksellers, I hope you know how much you mean to me because it has been a central part of my life for as long as I can remember,” she said. “Libraries and bookstores are right up at the top of my favorite things to do.”

In 2016, Clinton became the first woman in American history to become the presidential nominee of a major political party. Prior to the campaign, Clinton served as the 67th Secretary of State after spending nearly 40 years in public service as an attorney, first lady, and U.S. senator from New York.

During her time in public life, Clinton has authored several bestselling books with Simon & Schuster, including the memoirs Hard Choices (2014) and Living History (2003). This September, Simon & Schuster Books for Young Readers will republish her 1996 book, It Takes a Village, about her vision for children in America, as an all-new, full-color picture book illustrated by Marla Frazee. Based on an African proverb, It Takes a Village illustrates the idea that the most important people in a child’s life are not only that child’s family but the local community. Clinton said she thought it was time to re-introduce the book’s concepts of community, citizenship, cooperation, and support for kids in a children’s book format. 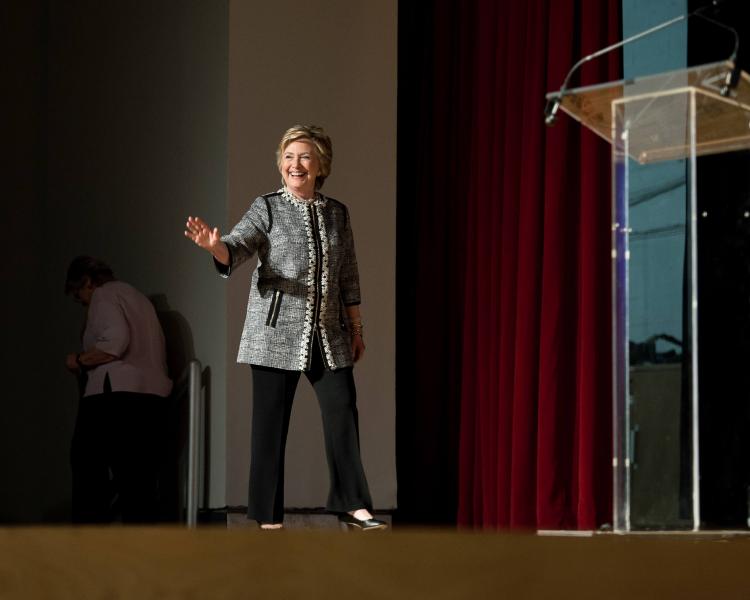 Simon & Schuster will also publish Clinton’s new memoir in September; Clinton said the new work, which she wrote after losing the election to Donald Trump last November, is an examination of her feelings during the norm-busting, chaotic presidential campaign against the controversial candidate.

“This book is, for me, a really personal, deep experience, and I also have to say an emotional catharsis,” said Clinton. The yet unnamed memoir was inspired by her practice of collecting inspirational, funny, and meaningful quotes, she said. After the election, Clinton began to go through those quotations and reflect on the country, her life, and what really happened in the election. She started to put her thoughts on paper “in a way that I think is not just about me and not just about an election,” she said, “but about resilience, about getting back up when you’re knocked down, because everybody is, where you find the courage to do that, and what helps you along the way. And it’s proven to be an extraordinary, very personally meaningful but painful experience; it really is painful.”

Though the book covers some of the events during the campaign that people watched on television and read about in the news, it examines them from her perspective and how it felt to her. Clinton said that the book goes deeper and is more revealing than any book she’s ever written.

“I think that both the experience and the choices we face in the future demand that I go as far as I can,” said Clinton. “This is my truth and people can disagree, as they will, I’m sure, but this is how I experienced [it]…I’m saying, look, you may think you know what happened and you may be right to a certain extent based on what you’ve perceived and how you processed it, but I’ll tell you what I saw and how I felt and what I thought, because you cannot make up what happened. I think that’s part of the reason why it’s such an incredible experience trying to write it, because even I forgot some of the wacky things that were said and done [during the campaign].” 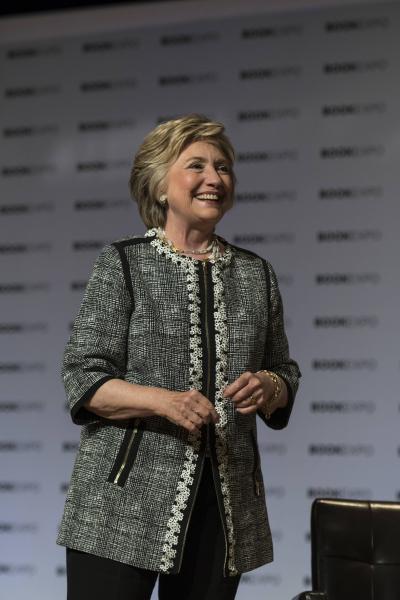 Writing the book has been positive for her mental health, Clinton said, but she also wanted to offer practical suggestions for people who are looking to help the nation move forward after an election that left us a more divided nation.

“I’m particularly concerned about the role that Russia played and the very serious interference that we know they were responsible for in our most fundamental democratic act,” said Clinton. “Whatever political party or philosophy [you have], you can’t be alright with the idea that a foreign adversary was trying to influence the outcome of our election, and that, to me, is a big challenge that we are going to face as a country: to explain, to arm citizens, to try to give people as simple as possible an explanation so that then they can go out and be active and speak up.”

Clinton told booksellers that in today’s fractious political climate she believes the role that independent bookstores play is more important than ever.

“I love bookstores and I love independent bookstores, and the stores that so many of you own, run, work in, and it is more important than ever,” she said. “I hope it’s true what I’m reading, that independent bookstores are on a real upward trajectory. And it is really encouraging to me that so many people are going back to bookstores, that they are buying real books that they can hold and touch and turn the corners down and all the things we do with our books.”

Lissa Muscatine, Clinton’s good friend and former speechwriter, and her husband, Bradley Graham, own Politics and Prose in Washington, D.C., and Clinton noted that, in addition to author events, the store hosts discussions and panels with experts, activists, and academics on important national issues like healthcare, the environment, and immigration, “using the independent bookstore as a gathering place, a community center…So I think that the role has always been important but I think it’s even more so now.”

When asked about her personal literary preferences, Clinton said The Brothers Karamazov and the Nancy Drew mystery series were some of her favorite books growing up; the book currently on her nightstand is The Jersey Brothers by Sally Mott Freeman, about three brothers fighting in the Navy during World War II. Clinton identified herself as a devoted mystery reader, namechecking the writers Jacqueline Winspear, Donna Leon, and Louise Penny.

While Clinton said she has no idea what her plans are now that the election is over, she does know she’ll be doing whaetver she can to support the resistance movement against the new administration, in part through her new political action organization, Onward Together. It has been thrilling, Clinton said, to watch the efforts of young people especially, who are registering voters, seeking out people to run for office and training them, and showing up at town halls.

“We’re going to have to both continue to find ways to work together and make progress together and to fend off whatever damage may be coming from Washington, so I’m not going anywhere,” Clinton told the audience. “I’m going to be as active as I can.”