A post-holiday survey of 2,602 independent business owners across the U.S., including ABA member bookstores, has found that the Buy Local message is boosting customer traffic and improving the outlook on Main Street. However, entrepreneurs also say policymakers need to do more to create a level playing field and ensure that small local businesses have an equal opportunity to compete.

The survey was conducted by the Institute for Local Self-Reliance (ILSR) in partnership with the Advocates for Independent Business (AIB) coalition, of which the American Booksellers Association is a founding member.

Among the survey’s key findings: 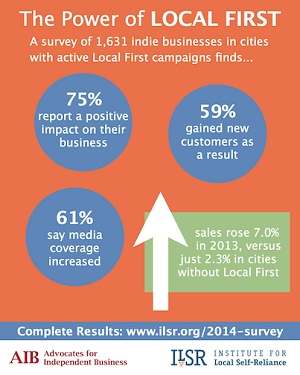 Buy Local — Over 75 percent of businesses located in cities with active Local First campaigns reported increased customer traffic or other benefits from these initiatives. They also reported sales growth of 7.0 percent on average in 2013, compared to 2.3 percent for independent businesses in places without such an initiative.

Policy Priorities — Among independent retailers, the top policy priorities are extending the requirement to collect sales tax to large online retailers, eliminating public subsidies and tax breaks for big companies, and regulating the swipe fees charged by Visa and Mastercard.

Internet Sales Tax — More than three-quarters of independent retailers said that the fact that many online companies are not required to collect sales tax had negatively impacted their sales, with 41 percent describing the level of impact on their sales as “significant.”

Access to Credit — Of businesses that applied for a bank loan in the last two years, 42 percent either failed to obtain a loan or received a loan for less than the amount they needed.

“This comprehensive survey makes clear the unparalleled role that local businesses play in the health and vitality of communities,” said ABA CEO Oren Teicher, co-chair of the Advocates for Independent Business. “And it highlights, too, the challenges that these businesses are facing regarding equitable governmental policy and a level competitive playing field. However, the widespread acceptance of the localism movement — which shows the potential of small business advocacy — is a clear sign for optimism.”

“This data confirms what we experience assisting communities with ‘buy local and independent’ campaigns — they are raising consciousness and driving more business to local independents,” said Jeff Milchen, co-director of the American Independent Business Alliance (AMIBA). “The data is inspiring and suggests the future will be bright for America’s entrepreneurs once we change policies that handicap independent businesses.”

“This study shows us that once again, businesses located in communities that have Localist campaigns are doing better than those in communities without. But it also makes it clear that we need policies that level the playing field if we are to have the kind of success that results in more good jobs and more real prosperity for more people,” said Michelle Long, Executive Director of the Business Alliance for Local Living Economies (BALLE).

The Business Alliance for Local Living Economies will be hosting a webinar on the findings of the Independent Business Survey on Tuesday, February 18, at 10:00 a.m. PT / 1:00 p.m. ET.   Space is limited and is expected to fill up quickly.  Early registration is open now until February 10 for BALLE, AMIBA, and AIB members.

Stacy Mitchell of the Institute of Local Self-Reliance will lead the webinar, which will look at:

Registration for the webinar opens to the public on Monday, February 10. 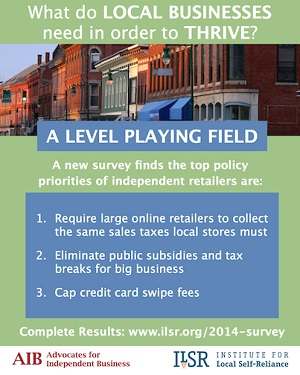