On Monday and Tuesday, July 15 and 16, indie booksellers across the country celebrated the shop-local spirit instead of Amazon’s Prime Day. Here’s a look at some of the social media posts and promotions indie booksellers drummed up to remind shoppers of the importance of local businesses: 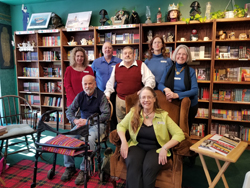 The staff at Centuries & Sleuths

On July 11, Centuries & Sleuths Bookstore posted on Facebook: “On July 15, Amazon is doing Prime day. What does it mean? People can get cheap products and books delivered faster than usual — IF they are paying Prime customers membership fee. But, do they host free author events like indie bookstores do? (C & S does:15 authors, just since June 1). Do they host ongoing book discussion groups like indies? (C & S hosts 3 reading groups and 2 writers groups) Does Amazon participate and give back to your community like Indies do? (C & S: Casket races, wine walks, Chamber committees, sidewalk sale). All with no membership fee! So where do customers & communities actually get a better deal? Amazon? or your local Independent Bookstores!” 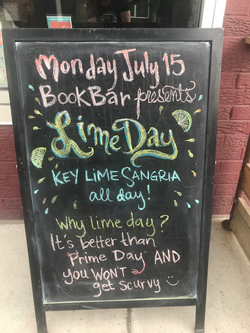 in Denver, Colorado, named Prime Day the new “Lime Day.” The store tweeted on July 14, “Give #PrimeDay a pass and opt for #LimeDay instead. @BookBarDenver is featuring Key Lime Sangria all day for $5. When you #ShopLocal to keep your hard-earned dollars in our community. Aaaaand — stave off scurvy! #GoLimeNotPrime #VitaminC #booklove @indiebound #SayNoToScurvy”

WORD, which has locations in Jersey City, New Jersey, and Brooklyn, New York, started off Prime Day with the tweet, “In the time it took you to read this tweet Jeff Bezos earned $12,445. #PrimeDay #ShopLocal #AmazonStrike,” and continued by sharing articles about Amazon, such as “Amazon is the invisible backbone behind ICE’s immigration crackdown” with the tweet “But free shipping! #PrimeDayAmazon #amazonstrike #shoplocal.” Authors like N.K. Jemisin and Dagmara Domińczyk also chimed in to show their support for WORD. 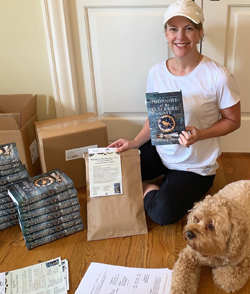 Packing up pre-orders at Snail on the Wall

On July 15, Snail on the Wall in Huntsville, Alabama, posted a message on Instagram to coincide with a pre-order campaign for a book about a local café that transformed its community: “This is what local looks like. While the Internet is chattering about Prime Days, I’m in my work clothes, dog beside me (well, only for the first 5 minutes), putting together special packages for a new book releasing tomorrow. Author Heather Webber signed these copies at her kitchen table, sent them to The Snail, and we are hand-packaging them with one of her pie recipes and a bookmark from @torbooks. And we’ll also be bringing Heather to Huntsville on August 20 for a Summer Book Signing at Lyn’s Gracious Goodness cafe. It’s all pretty personal, and independent bookstores wouldn’t have it any other way. We love connecting our readers with authors and their stories.” 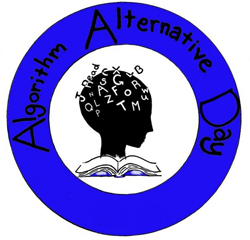 Once Upon a Time in Montrose, California, had customers waiting in line outside for the store to open on Monday, July 15, as it celebrated its fourth “Algorithm Alternative Day” with discounts of 11, 19, and 23 percent — all prime numbers. The store also continued an ongoing donation drive for local homeless students and gave away chocolate treats. At the end of the day, Once Upon a Time had tallied triple its usual sales and number of receipts for a Monday.

This isn’t the first time Serrano mobilized his fans to support an indie bookstore: in 2017, a bookseller from Carmichael’s Bookstore in Louisville, Kentucky, tweeted at Serrano to encourage him to link to indie bookstores instead of Amazon. Serrano heeded the call and sent his fans to purchase books online from Carmichael’s, which racked up more than 1,000 orders in the first few hours.

Booksellers also used Prime Day as an opportunity to encourage customers to make the switch from Audible to Libro.fm, the audiobook platform for indie bookstores, as part of the company’s #AudiobookSwitch campaign. As a result, Libro.fm saw the highest number of membership signups over a two-day period in its history, there were more memberships sold than on Independent Bookstore Day this year (typically Libro.fm’s best sales day of the year), and there was a 400 percent increase in traffic to Libro.fm’s website.

“Prime Day used to be a day booksellers dreaded because it lured customers away from bookstores with rock-bottom prices,” said Mark Pearson, CEO of Libro.fm. “This year, we used Prime Day to tell a story about the audiobook curation and community offered through local bookstores. As a result, we had a record number of customers switch from Amazon’s Audible to a local bookstore. It was a surprise that the biggest two-day sales stretch in our history occurred on Amazon’s biggest day, even surpassing sales of our own Independent Bookstore Day. We can’t wait for Prime Day 2020.”