Bookselling This Week checked in with independent bookstores across the country after a busy holiday shopping season to discuss popular titles, sales, and what made this particular season special.

Overall, independent bookstores saw a strong final week of holiday sales and ended the year very slightly down, at -0.31 percent over 2018. According to the Census Bureau, sales at all U.S. bookstores (including trade, college, religious, chain stores, and others) were down 5.3 percent for January–October 2019 over the same period in 2018. 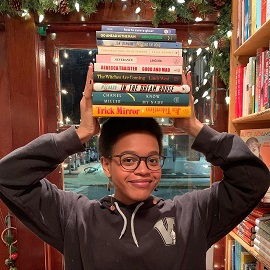 For stores using ABA’s IndieCommerce and IndieLite e-commerce platforms, online gross sales between November 1 and December 31 were up 25 percent over the same period in 2018. The conversion rate for online sales (the percent of online shoppers who completed a purchase) increased by 11 percent during the holidays, and yearly online gross sales per store increased by 17 percent overall from 2018 to 2019. IndieCommerce and IndieLite sites hosted 16.37 million customers in 2019.

Janet Webster Jones of Source Booksellers in Detroit, Michigan, told BTW that sales for the 2019 holiday season were good. While they weren’t as exciting as they were last year due to the 2018 release of Michelle Obama’s Becoming (Crown), she said that the season was still strong.

Heading into the holiday season, the store saw a boost in sales as a result of its 30th anniversary celebration, which was held just before Thanksgiving, as well as a lively Small Business Saturday. The nonprofit community development organization Midtown Detroit, Inc. also held a City Cultural Center-wide open house event called “Noel Night,” which brought in many holiday shoppers during the first week of December.

Popular items sold in-store included Obama’s Becoming: A Journal for Discovering Your Voice as well as Malcolm Gladwell’s Talking to Strangers (Little, Brown and Company) and Ta-Nehisi Coates’ The Water Dancer (One World).

Melissa Taylor, general manager at E. Shaver, Bookseller in Savannah, Georgia, shared that sales were up at her store by three to five percent. “It was interesting because we had a really good Black Friday, and then we had a less good Small Business Saturday, which was kind of weird, and then the week leading up to Christmas itself was a little bit slow for us,” she said. “But the week after Christmas was way over.”

According to Taylor, there wasn’t one particular top-selling item in her store, but rather, it was mixed across the board. She did, however, sell many more gift certificates this year than the store has in the past. 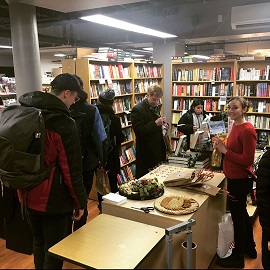 A busy holiday season at Trident Booksellers and Cafe in Boston.

Taylor also noted that E. Shaver didn’t hold any events this holiday season. “We were just focused on business at hand in the store. That kept us pretty busy,” she said.

Kate Rattenborg of Dragonfly Books in Decorah, Iowa, said that while her store had a slow start to the holiday season, it ended strong. Overall, sales were up almost 10 percent over 2018, and it was the highest-earning December her store has had yet.

Rattenborg noted that while she isn’t certain what caused the slow start to the season, it likely had to do with the late Thanksgiving, in addition to other local issues. “Traditionally, Black Friday and Small Business Saturday are strong kick-off days for us, but this year we had some big football games that our customer base is really interested in,” she said. “So, we had good Black Friday and Small Business Saturday sales, but not great, because of those two games.”

In terms of holiday promotions, Dragonfly worked with the Midwest Independent Booksellers Association holiday catalog to offer a coupon for $15 off $100 spent in-store, which is a yearly success. “Our goal is to drive higher sales per person, and to reward our customers that spend money with us,” said Rattenborg.

James Fugate of Eso Won Books in Los Angeles, California, told BTW that sales this year were “much higher than expected.” In years past, said Fugate, the release of Michelle Obama’s Becoming and Pete Souza’s Obama: An Intimate Portrait (Little, Brown and Company) bolstered sales for the holiday season in 2018 and 2017, respectively. While there wasn’t a title like that this year, Eso Won still saw many customers in-store.

Eso Won didn’t host any events this holiday season, but the store saw success communicating with its customers through e-mail; Fugate noted that he was able to sell 20 copies of one book in particular through e-mail marketing alone.

“This year was very good,” he said. “And the sales just from the last five or six days of this year have been very strong, too.”

Marlene England of Curious Iguana in Frederick, Maryland, said her store saw an excellent holiday season, with fourth quarter sales up 12 percent over 2018.

This year, the store hosted an event called “Ask A Bookseller: Holiday Edition.” England noted that it was “a fun way for customers to stop by and chat directly with six of our booksellers about our favorite reads and gift recommendations...My favorite part of the season is seeing our store filled with book lovers and helping customers find the perfect book for everyone on their shopping list!” 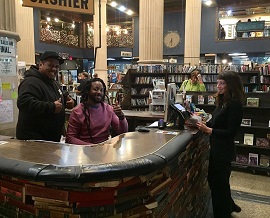 Booksellers at the Last Bookstore in Los Angeles.

Said England, “We’re a small shop, just under 1,000 square feet, and I’m thrilled that our local community continues to love us as much as they do.”

Mary Ackland, retail manager of Mitzi’s Books in Rapid City, South Dakota, said that sales at the store were up for December.

Standout titles for the season included Jimmy Kimmel’s The Serious Goose (Random House Books for Young Readers) and the illustrated edition of J.K. Rowling’s Harry Potter and the Goblet of Fire (Arthur A. Levine Books).

Phil Lewis of the Bennington Bookshop in Bennington, Vermont, also said that sales for the holiday season were strong, and the store was busy right until the last minute. Similar to other stores across the country, he noted that there was a range of interest across many different titles, with none in particular standing out.

Said Lewis, “Our favorite day of the season is the day after we close and we can put our feet up and do nothing for the first time in a month.”

Laurie Raisys of Island Books in Mercer Island, Washington, said that the holiday season felt very busy. Said Raisys, “It was a weird season because Thanksgiving was so late, and there were fewer days to Christmas than normal. We haven’t had a holiday season like that since 2013, and I didn’t own the store then…But it felt continuously busy, which was great.” 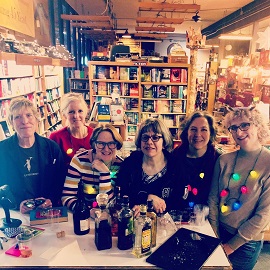 Raisys added that Island Books hosted a number of in-store book fairs with area schools during the season, which gave sales a boost and helped her gauge what non-book items would be popular with holiday shoppers. The store also extended its hours and hosted shopping nights with prosecco and finger foods for people who wanted to shop in the evening.

“It was a good holiday season. We’re in a small community, so it’s really, really special when kids come home from college — they’ll come in here and have these mini reunions, and they’ll run into people they haven’t seen in a long time, and I’ll get to see kids that my kids went to school with, or kids that I’ve known since they were really little,” Raisys said. “The holidays really bring out the magic of what a bookstore is and what it can do for a community. They make booksellers feel like magicians because they get to put books in people’s hands, they get to wrap a gift up, they get to make a person happy. There are so many amazing things that happen during the course of the holiday season. We get to be a part of so many little special moments. It amazes me.”