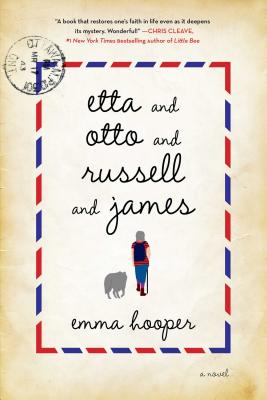 Emma Hooper is the author of Etta and Otto and Russell and James (Simon & Schuster), a Winter/Spring 2015 Indies Introduce selection for adults and a February 2015 Indie Next List pick. Hooper, who received her doctorate in musico-literary studies from the University of East Anglia, performs as the solo artist Waitress for the Bees and plays with a number of bands. She lives in Bath, U.K., and is a senior lecturer in commercial music at Bath Spa University.

“This lovely, moving novel opens with 83-year-old Etta heading east from her Saskatchewan farm, aiming to walk to the sea, which she has never seen. Left behind are her husband, Otto, and their neighbor and lifelong friend, Russell,” said Cathy Langer of Tattered Cover Book Store in Denver, Colorado. “Wry and quirky, a little bit magical and perfectly pitched, [it] is a truly marvelous debut.”

What inspired Etta and Otto and Russell and James?

Emma Hooper: Well, the characters of Etta and Otto are loosely based on my maternal grandparents. My grandma did actually teach in a one-room schoolhouse in Saskatchewan, and my grandpa did grow up in a farm family of 15 kids (and his hair did all go white when he was overseas for the war). So, I suppose, a mixture of that and letting my slightly absurdist imagination take over from time to time. I like to play little “what if” games with myself. “What if fish skulls spoke? What language would it be in? What would they say? Why?” Or, “What if, instead of taking the fastest, easiest way to get somewhere, you took the slowest? Why?” I put that kind of thinking together with the characters who help direct it, and, ta-da, a sort of story appears.

What challenges did you face writing from the perspective of people much older than yourself, with experiences very different from the generations that followed?

EH: As with anything where you try to take on the voice of an “other,” research and sensitivity are required, which can mean things taking longer and being slightly less intuitive than if I were writing about, say, a woman in her thirties living in England. However, all of us have ancestors, and, whether we want them to be or not, our links with them are strong in a sort of gut-pulling way, so writing about Etta and Otto in this way was a bit like writing my own past and future at once. The past in terms of ancestral history and the future in terms of old age, and our own inevitable plight in that direction.

Without giving too much away, how did you come up with the character of James?

EH: It was important, for the first half of the book, at least, for Etta to be alone, away from human companionship as much as possible, as she is using this adventure as a way to define herself and her individuality away from the companionship of Otto. But she still needed a partner of some kind, which is where James comes in.

You are an accomplished musician with quite a resume — a Finnish Cultural Knighthood, work on TV and film scores, clients like Peter Gabriel and Toni Braxton, lecturer at Bath Spa University, and a solo act called Waitress for the Bees. Where did the name “Waitress for the Bees” come from and how do dinosaurs fit in?

EH: The name “Waitress for the Bees” was the product of a silly night of word-association games with some friends. It was a phrase we accidentally came up with, but that we all liked the sound of. My sister, an artist, went on to do a painting with that name, while another friend present, a composer, went on to compose a piece, and I went on to use it as my solo project moniker. Even though it’s kind of nonsense, there’s something a little bit magic-seeming about it, maybe because it’s at the same time evocative and absurd. There’s space to play there.

I wrote my first album about dinosaurs as an homage to the dusty bones of home. I wrote the album in Finland and England, but all the songs are named for dinosaurs from Alberta [Canada], where I’m from. Dinosaurs carry with them the cultural idea of long, deep history, and that’s what I was looking to explore, both on a literal and metaphoric, personal level.

What musical piece would you associate with each title character? (Etta, Otto, Russell, and James)

EH: Etta — “One Day I Walk” by Bruce Cockburn

Otto — “Lewis Takes Off His Shirt” by Owen Pallett

(And, even though you didn’t ask, I think it’s worth adding that “April Showers” by Judy Garland is Owen’s song. Owen doesn’t get to be a titular character, but he does get his own song.)

EH: Are you working on anything now? (Music or writing!)

Yes and yes. Music-wise, I’m about to release a new little album as my solo project, Waitress for the Bees. It’s called “Cicadanthem” and features a whole lot of my viola (and singing and other things). There’s a sort of dance-hit one called “Stickbug” that I’m especially excited about making the video for.

Writing-wise, I’m working on some exciting (to me…?) academic pieces on vocal range in Disney princesses and, perhaps most importantly, a new book, set in stormy, lonely, Newfoundland. There are mermaids.