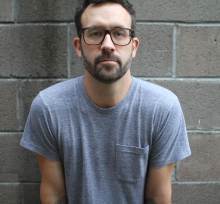 Smith Henderson is the author of Fourth of July Creek (Ecco), a featured title in the Summer/Fall 2014 Indies Introduce promotion. Henderson's honors include the 2011 PEN Emerging Writers Award for Fiction, a 2011 Philip Roth Residency in Creative Writing at Bucknell University, a 2011 Pushcart Prize, and a fellowship at the Michener Center for Writers in Austin, Texas. His fiction has appeared in American Short Fiction, One Story, New Orleans Review, Makeout Creek, and Witness. Born and raised in Montana, Henderson now lives in Portland, Oregon, and works at the Wieden+Kennedy advertising agency.

Stephanie Crowe of Page & Palette in Fairhope, Alabama, described Henderson’s novel about a struggling social worker and the families he tries to help as powerful and disturbing. “The Pearl family is characterized by suspicion, paranoia, and fear of the future, as they believe they are in the End Times,” said Crowe. “The emotional difficulties expressed are intense and raw and portray a layer of American life that does not mesh with the norm. This story is a literary gem and well worth the read.”

While none of the characters may have been based on specific people, how did your experience as a social worker help to inspire Fourth of July Creek?

Smith Henderson: Well, the things I was witness to — the damaged young men and boys with whom I worked — are sacrosanct. So no, my book isn’t at all drawn from actual people I worked with and for. But I was moved by their struggles, their traumas, and the secondary trauma that affects people who are there to help. Eventually, I was inspired to write about that stuff — suffering, struggles, and, ultimately, the dignity to press on.

What benefits does access to literature have for young people, especially those who are considered “at risk”? In what ways have books influenced your life?

SH: I’m not one who will argue that books ennoble people or make them better in some appreciable way. But I do believe that books have the power to deepen us. They say that an imagined experience has very similar chemical consequences in our brains as real experiences. So, in a way, readers are enriched by the experience of reading in a way that non-readers are not. I know that for me, reading has been a conduit to experiences and perspectives that I hope have made me more compassionate. While I can’t say definitively that I’m a better person outwardly, I aspire to be more understanding.

Fourth of July Creek delves into the complexities of American society in an often unsettling, but honest, way. What do you hope readers take away from your debut?

SH: I hope they feel like they encountered a great book. I am excited to debut with this book, but there is always a temptation to treat a first novel as a novice effort. I’ve been working on it for 10 years. I was publishing short stories and made a feature film while I hammered away at this book. It feels weird to think of it as a debut for me. But I’m grateful for the attention it’s getting.

Our panelists want to know: To what extent did you want to subvert the reader’s expectations about what a Western novel is?

SH: I wanted to subvert the Western character as rendered in our stories, mainly in film and TV. Westerners don’t mumble like they have marbles in their mouths and stare stoically at the evening redness in the west. They are just voluble, funny, neurotic, pathetic, foolish, blooming, and delightful as anyone in a coastal salon or Southern swamp.

Of course, the landscape figures prominently in “the Western” as it does in my novel. But Montana is damn beautiful. To not write about it would be a willful blindness.

What authors have most influenced your writing?

SH: I was relieved to discover in writers like Carver, Kesey, and Robinson that writing about the Northwest was legitimate, because all my early literary heroes were from places exotic to me. Then I read a lot of Southern literature and really self-recognized. Flannery O’Connor and Faulkner were particularly important to me, but also Barry Hannah. Early Cormac McCarthy. Hemingway.

SH: I’m working on about three things now. I always have several projects going at once. Three different novels are competing for my attention, and I’ll eventually settle into one. I’m also working on a TV adaptation of Fourth of July Creek.

When you travel, do you stop at bookstores? Any particular indies make a lasting impression?

Of course. Mostly in the West, where I hang out. Powell’s in Portland and Elliot Bay in Seattle are two of my favorites.

If you were a bookseller for a day, what book would you want to put in every customer’s hand?

SH: Brian Hart’s Bully of Order, which is coming out this fall. It’s remarkable. His stuff is so damn good.

If you could grab drinks with any three authors (past or present), who would they be and what would be the topic of conversation?

SH: Honestly, I’d like see what Theodore Roosevelt, Socrates, and Flannery O’Connor would talk about. I think it would be awkward: Roosevelt and Socrates running their mouths; O’Connor cutting them down every once in awhile with a terse bit of Southern Catholic wit.