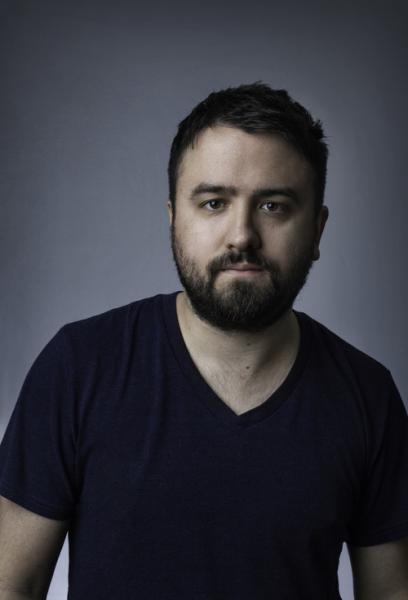 David Arnold is the author of Mosquitoland (Viking), a Winter/Spring 2015 Indies Introduce New Voices title and a Spring 2015 Kids’ Indie Next List pick. Arnold has worked as a freelance musician and producer, a preschool teacher, a barista, and a stay-at-home dad. He currently lives in Lexington, Kentucky, with his wife and son.

“Mim will do anything to get from Mississippi to Cleveland to be with her mom, now that she knows she’s sick. Her journey is full of trials, but Mim also finds some of the most unexpected joys and allies,” said Tegan Tigani of Queen Anne Book Company in Seattle, Washington. “Mim is a striking blend of hardened eye-rolling, warm-hearted love, and fierce protectiveness — a teen who is at once savvy and naive. This story provides laughs, empathy, and quote-worthy passages. I loved it!” 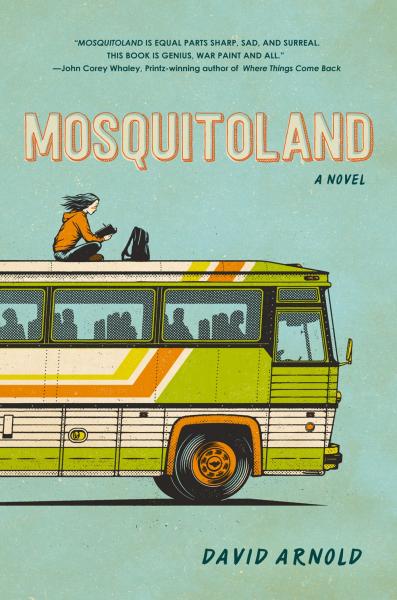 David Arnold: I was literally terrified into writing this book. I’d been working as a freelance musician in Nashville, piddling around with a few middle-grade manuscripts, when my wife and I found out we were going to have a baby (surprise!). Within an hour it was decided I would turn in my career in music to be a stay-at-home dad. Prior to this, I’d had an idea for a more serious novel, but to be honest, the idea scared me. I told myself I’d get to it someday. But then someday became this day, and that was when I started writing for my life. Sometimes I think it takes one great fear to confront another great fear — certainly that was the case here.

You have a fantastic line at the beginning of the book: “Every great character… is multidimensional. The good guys aren’t all good, the bad guys aren’t all bad, and any character wholly one or the other shouldn’t exist at all.” How did you take this into account when shaping your characters (goodies and baddies alike)? Do you think this is important for middle grade and YA authors to remember?

DA: When I sat down to write Mosquitoland, my number one priority was character authenticity. So it was a very intentional decision to mirror human complexities, and to avoid one-dimensional characters at all costs. With Mim, this wasn’t difficult, as the novel takes place inside her head. The reader has access to her internal complexities, as opposed to some of the peripheral characters, who are forced to prove their multidimensional qualities through words and actions. I tried my best to offer some semblance of goodness to even the more despicable characters (and vice versa), though it wasn’t always easy.

I do think it is important for young adult and middle grade authors to write fully realized characters, though not all books call for such blatant realism (and thank goodness for that!). But literature should, in some way, reflect life. And people are exceedingly complex.

Why did you choose to make mental illness an underlying theme in Mosquitoland?

DA: Like many other facets of this novel, it was something that happened organically, over time. I didn’t sit down to write a book about mental illness, but once I really dove into Mim’s character — specifically her relationship with her parents — it became evident that this was part of her story. I have no personal experience with mental illness, so in addition to quite a bit of research, I recruited the help of three top-notch professionals: a clinical psychologist, a licensed clinical social worker, and a licensed social worker who specializes in mental health. Mental illness affects so many people in so many different ways, so in wanting Mim’s experience to be a realistic one, I felt it was my responsibility to do everything I could to get it right.

What can you tell us about Cinema Cycle?

DA: When I worked as a freelance musician, I scored quite a bit of music for indie films, camp videos, even a few commercials. As there was already a very brilliant film composer named David Arnold, I had to come up with a different name for myself. Cinema Cycle became the musical moniker under which I released all my music, some lyrical, some instrumental. Since the book deal, I haven’t done much recording, but I do hope to get back to it someday soon!

As a fan of indie bookstores, how do you think indies help foster community?

DA: Oh, I love this question. Years ago, I worked at this old record store; it had wall-to-wall vinyl and comics and DVDs, and reeked to high heavens of patchouli and dust. (So it was awesome, in other words.) Shortly after I began working there, one thing that struck me was the camaraderie between the store’s employees and its regular customers. Half the time, they would leave without buying anything, because we’d spend the entire morning talking shop. I feel that same camaraderie when I walk into my hometown indie bookstores. Buying a book is only half the reason I’m there. The other half is to talk books with my friends. And in those moments, it doesn’t matter who is selling and who is buying — we’re all in the same boat. And that’s community.