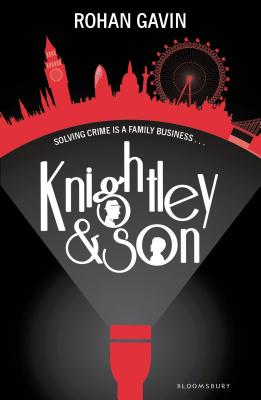 Rohan Gavin, the author of Knightley & Son (Bloomsbury Children’s Books), is a script writer and novelist. He lives in London with his wife and son.

The hero of Gavin’s debut novel for middle grade readers is 13-year-old Darkus Knightley, who is determined to follow in his father’s footsteps as a private investigator — starting with the mysterious circumstances surrounding Alan Knightley’s last case, which left him in a coma. When Alan suddenly wakes up, the real case begins. Knightley & Son “is a clever, creative, exciting adventure perfect for everyone who loves a good, classic mystery,” said Kris Vreeland of Once Upon a Time Bookstore in Montrose, California, of this Spring 2014 Kids’ Indie Next List Pick.

What inspired you to write Knightley & Son?

Rohan Gavin:  I wanted to combine some of the genres I love, such as mystery, suspense, and comedy, but I also wanted a strong relationship at the center of it and the father-son relationship in Roald Dahl’s Danny the Champion of the World was a big inspiration.

What advice would you give a young reader interested in writing?

Did a particular teacher foster your interest in writing?

RG: Two people come to mind. One is my tutor at Oxford, Jeri Johnson, who helped me look at literature in a new way. The other is the late, great James Bond screenwriter Tom Mankiewicz, who kindly read and gave me notes on my first script. His sense of fun and adventure has stayed with me.

Were books an important facet of your childhood? What book do you think started your interest in detective novels?

RG: My parents read a lot and I read a lot too — often borrowing books from their shelf. My mum was becoming a children’s writer herself, so she would often read me and my sister bedtime stories that she’d made up. The books I particularly remember from childhood were the Sherlock Holmes stories, most of Roald Dahl, Herge’s Tintin, and Grimms’ Fairy Tales.

RG: My two-year-old son loves stories and being read to, and demands almost a dozen stories a night before he goes to bed — fortunately the stories aren’t too long! He likes the Julia Donaldson books, especially Zog; and he loves Peppa Pig, especially Peppa Meets the Queen — although he has no idea who her Majesty is. When he’s older, obviously I hope that he likes the Knightley & Son series and I’d love him to read Sherlock Holmes, James Bond, and all the other books I grew up loving.

RG: I’ve just finished a draft of Knightley & Son: K-9, which is the second book in the series. I’m now hatching a plot for Knightley & Son book three, which I hope to set in the U.S.

At what point did you start calling yourself an author?

RG: When I received the final cover and felt that the book was becoming a reality!

If you were a bookseller, is there a book you would say every child just has to read?

RG: Charlie and the Chocolate Factory by Roald Dahl.

If you were stranded on a desert island, what three titles would you want to have with you?

RG: The Complete Sherlock Holmes by Sir Arthur Conan Doyle (is a collection allowed?); Ulysses by James Joyce (because unraveling it would keep me occupied!); The Hitchhiker’s Guide to the Galaxy by Douglas Adams.