“The voice of 12-year-old Elvis Babbitt is unforgettable — funny, smart, surprising, and heartbreaking,” said Susan Hans O’Connor of Penguin Bookshop in Sewickley, Pennsylvania, who served on the Indies Introduce Adult Debut panel. “Hartnett’s profound understanding of the power and influence of the mother-daughter relationship, even if the mother is physically or emotionally absent, brought to mind the brilliant novelist Mona Simpson.”

Hartnett lives in Providence, Rhode Island with her husband and their border collie and teaches classes on novels and short stories at Grub Street, an independent writing center in Boston.

After earning her MFA from the University of Alabama, Hartnett was selected for the Associates of the Boston Public Library’s 2013–2014 Writer-in-Residence program, where she wrote Rabbit Cake. During her residency, Hartnett worked at independent bookseller Newtonville Books in Newton, Massachusetts.

Here, O’Connor talks with Hartnett about her inspiration for Rabbit Cake and her connection to indie booksellers.

Susan Hans O’Connor: Every reader of Rabbit Cake seems to fall in love with Elvis Babbitt, who deals with the death of her mother with a grace and dignity that is well beyond her years yet completely believable. Would you tell us how you “found” Elvis and decided she should be the center of your story? Given the obvious association many people have with the name Elvis, how did you choose it for your heroine? 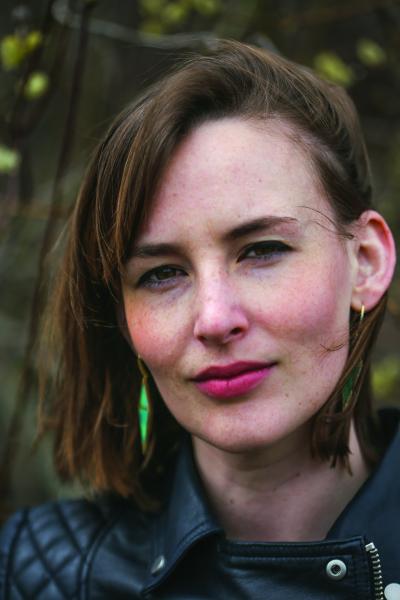 Annie Hartnett: I was obsessed with Elvis Presley as a kid, ever since a visit to Graceland when I was seven years old. I’ve been gifted a lot of Elvis paraphernalia in my life, including an Elvis keychain given to me on my 16th birthday. I’ve had that on my keys ever since, so I’ve seen the name “Elvis” every day, and I guess it was bound to worm its way into my fiction because of that obsession.

So a little girl named Elvis appeared in a short story at first, and then one of my mentors, the novelist Heidi Durrow, said: “I don’t think you’re done with Elvis yet.” Shortly after that, Elvis Babbitt took the center of my novel by storm, in her quiet, sneaky, forceful way.

SHO: Rabbit Cake beautifully illustrates how people deal with grief in very different ways, and shows the complexity and depth of this emotional process. What drew you to this difficult subject? (And is it true that you live in a cemetery in Alabama and “dance on graves”?!)

AH: Well, when I began writing it, the mother of one of my closest friends had recently died. I didn’t know her mother very well, but I did know that she was a vibrant person — a belly dancer, a yogi, an incredibly beautiful blonde woman. She used to write my friend these amazing rambling, passionate e-mails in college, always written in all caps, and we used to read them out loud because her advice and enthusiasm delighted us. The mother in the book, Eva Babbitt, is partially based on what I knew of her mom, and a lot of the book came from thinking and worrying about my friend — and also not knowing what to say to her. I wrote my friend a very sheepish e-mail about it at one point about writing the book and she responded with the kindest thing you can say to a fiction writer: “Of course you can use my mother for inspiration. She was very inspiring.”

And I did live in a cemetery in Alabama! I no longer live there, but I was living in a former groundskeeper’s house when I started writing the book. I didn’t exactly dance on graves (as I joked about in that interview you’re referring to), but I did walk my dog through the cemetery every day. I really liked living there.

SHO: Can you reflect on the large symbolic roles that both food and animals play in Rabbit Cake? Are both of these things personal passions? 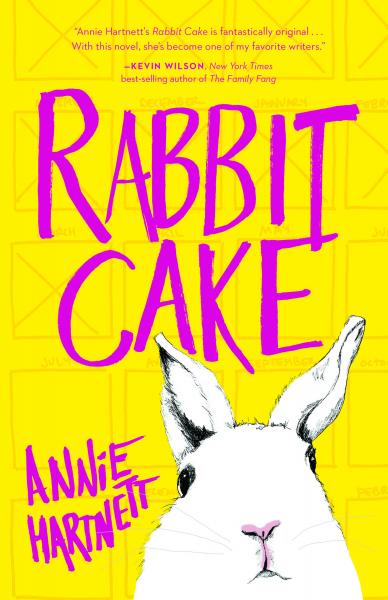 AH: Well, I’m no stranger to eating my feelings (or not eating them — I’m usually a starver when I’m in emotional pain), and I think that’s a common way we cope and comfort ourselves and each other after loss. The book is also about grieving privately and grieving collectively, and I think food is really connected to that idea — when it helps to share something, and when it helps to be alone.

I could talk forever about animals (yes, you’ve hit my personal passion). I’ve always loved animals, and feel a deep connection with them. I love all kinds of animals; no animal is too scaly or slimy for me. Animals bring me so much happiness, and their pain brings me so much sadness. That is probably the way that Elvis is most like myself — we both feel so strongly toward animals, and kindness toward animals is one thing that helps us make sense of the world.

SHO: You’ve written about your experience working as a bookseller at an independent bookstore. Has this work influenced your writing or writing process in any way? If so, how?

AH: The best thing about being a writer who works at a bookstore is that you’re around people all day long who speak your language — whether it’s the other booksellers or the customers. It really helps to have a community when you’re a writer, and that bookstore was mine. It was because of that community that I was able to finish Rabbit Cake, and also because of the generous fellowship I had through the Associates of the Boston Public Library. I started the novel in my MFA program, but I finished it at the bookstore and at the library.

SHO: As you know, indies are about hand-selling and making connections with customers. If you were incognito in a bookstore and handed Rabbit Cake to a customer, what would you say about it?

AH: I hope to actually do this next Christmas when I’m back at my former bookstore to help during the holiday season! I’d say that Elvis is a character who is really fun to follow around for 300 pages, and that Rabbit Cake is an ultimately hopeful and uplifting book on how to cope after great loss. I’d say that the book is both heartbreaking and hilarious. I would say it’s really great for book clubs, and that I’ve heard the author is very willing to Skype into any book club that asks. And then I’d wink.

Find out more about the author at anniehartnett.com.