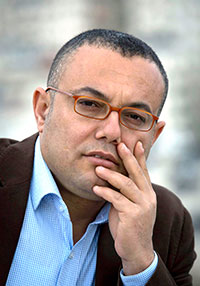 Atef Abu Saif is the author of the Summer/Fall 2016 Indies Introduce debut The Drone Eats With Me: A Gaza Diary (Beacon Press).

Abu Saif was born in the Jabalia refugee camp in the Gaza Strip in 1973 and today lives with his family in Gaza. He is the author of five novels, including A Suspended Life, which was shortlisted for the 2015 International Prize for Arab Fiction. The Drone Eats With Me is his first book published in the U.S.

“Abu Saif’s journal of the incessant bombing of the Gaza Strip during the summer of 2014 presents a voice we usually do not hear,” said Indies Introduce adult debut committee panelist Mary Fran Buckley of Eight Cousins in Falmouth, Massachusetts.“Abu Saif gives names and faces to the anonymous people appearing in the daily news. His personal account, presented clearly and passionately, is testimony that must be heard.”

Here, Buckley talks with Abu Saif about his American debut. 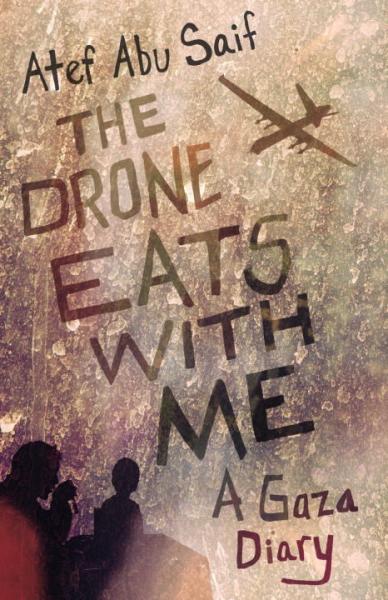 Mary Fran Buckley: The Drone Eats With Me recounts your daily life during the summer of 2014, when Israel retaliated against Palestinians in the Gaza Strip. Have you always kept a daily journal, or is this work in response to the horrible events of that summer?

Atef Abu Saif: I do not always write a daily journal, though on many occasions I write notes of events (personal or general) that touch me or events I think will be of particular importance for my future writing. In previous assaults against Gaza, I wrote many pages in which I described certain actions, feelings, and worries, describing the camp where I lived and the way people reacted to the approaching death. Death was never as close as it was in 2014, to the extent that I was not sure if I was alive or dead. Only when I was writing did I, for a minute, feel that I was alive because I was doing something that people cannot do when they are dead: writing about their life. I was telling myself I cannot be in the afterlife, because thoughts about life only run in the minds of the alive. In addition to that, I was telling myself that if I am still alive, and if only through writing can I make sure of my beingness, then I can leave something behind. I think my wife, Hanna, my five kids, and I were making a brilliant effort to keep our life normal. At that time, what mattered was the fact that we kept going. I wanted to leave something that people later on would read and see that my little kids, who had nothing to do with war and who never understood its logic (and I never wanted them to), enjoyed their life.

MFB: In the West, we heard the news about the death of a group young boys who were playing soccer. You, on the other hand, knew them, their names, their families. These attacks are very personal for you. Would you please comment further on why you used your story as a way to give a face and a voice to people about whom we learn so very little?

AAS: I know how it feels to be a number, a vague story, an abstract figure. I do not want to be a number that is lost after a few seconds in the machine of news-making. Also, I am the narrator of the nation, or its defender. It happened that I was there, and that I was able to do something amid the destruction and killing. Writing is about reassuring life, in this sense showing that people are not numbers, that there are hundreds of stories behind every person who is killed. Every one of the dead is a book of stories that is full of dreams, hopes, desires, unfulfilled journeys, and untaken roads. Those unspoken stories have to find their place in the narrative. Thus it has to be a different narrative — not like the one you hear in the news. It is not about telling the story of war and its victims, rather it is about telling the story of life and of the people whom war turned into victims, and the media into numbers. The role of the author is to celebrate life. Even when he or she writes about death it is to say that the life that death took is worth knowing.

MFB: In spite of the destruction you detail, there seems to be a shred of optimism and an attempt to keep life as close to normal as possible, to continue with daily routines amid the ruins. Is this a correct reading of your diary?

AAS: What other options do you have when you might die the next minute? Either you sit down and die or you try to maximize the pleasure you can have and enjoy every second of the life you have. In Gaza, people are born during war and they die during war. In this sense, life is a break between two deaths. If this is true, then the best thing you can do is to live your life the way you like because it is not you who puts an end to it.

Personally, one of my techniques or defense measures to forget about war and death is to insist on my normality, to live as if war does not exist and to keep doing the things I used to do during normal times. Life is the enemy of war, as the main aim of war is to take our lives. I wanted to keep my life. And if the place keeps changing as a result of the ongoing war, then what remains of the place is us.

MFB: You have lived your whole life in Gaza and you have experienced endless cycles of attacks, but the advent of drones seems to have heightened that threat. It is a threat so immediate that the drone is a presence at your family’s meals. You have compared the drone operator — who targets from a remote location — to a person playing a video game. It is war at its most impersonal. Have drones taken the conflict to a higher, more lethal level?

AAS: The drone is always there. Sometimes, if it is not around, you think that something is wrong. In a way, you start to follow its disappearance and wait for it to come back. Then you discover that it has gone nowhere. You live with it. It is not something that you choose, but over time you start to normalize its presence. It is like you try to forget. The more you try, the more you are sure that you remember. When it comes to drones, you feel that you are a target for an invisible enemy. In normal war, feelings — even of hatred and revenge — exist and affect the decisions you make. Here it is different. Drones dehumanize war. War is an inhuman action, of course; however, at certain moments, soldiers and fighters might turn to their humanity. When war is orchestrated through remote killing machines, then the personal aspect of it is absent and victims are turned into images.

MFB: The Palestinian-Israeli conflict has gone on for many decades, and proposals have been made to establish a separate Palestinian state. Do you see any hope for a peaceful future for you and your children?

AAS: We cannot live without hope. The minute you lose hope, you stop dreaming of the future. The minute you stop dreaming of the future, you can no longer enjoy living. I think that despite everything, we should keep hope that peace is possible. We make hope. It is not a product that you import. I do not want to carry my kids and flee through the sea. I want them to live their lives in their home and enjoy as much calm as they can. And I want them to believe in tomorrow — to truly believe that tomorrow is better, because they deserve a better life. Remember, without peace, life is in danger. Without a Palestinian state or a state for the two nations, and a solution to the whole conflict, peace cannot be achieved.

Learn more about the author by following him on Twitter.