Augustus Rose is the author of The Readymade Thief (Viking), a Summer/Fall 2017 Indies Introduce adult debut novel and an August Indie Next List pick.

Jason Kennedy of Boswell Book Company in Milwaukee, Wisconsin, served on the Indies Introduce panel that selected The Readymade Thief, which follows 17-year-old Lee as she flees after stealing something that is not hers.

“Rose takes readers into the underbelly of Philadelphia, the sections that people have abandoned, to solve the mystery Lee has fallen into, which has to do with the famous artist Marcel Duchamp,” said Kennedy. “Rose melds together information and story methods with amazing skill, drawing on secret societies, hacking, art theft, conspiracies, drugs, and so much more. This plot moves; it does not slow down until it reaches the conclusion, which will have you gasping for breath. Such a brilliant journey.”

Here, Kennedy and Rose discuss the different aspects of the story that make up Lee’s underground world.

Jason Kennedy: Philadelphia plays a major role in The Readymade Thief. Were you able to go on any of the same urban exploration trips that Tomi took Lee on? How did you decide what parts of the city to feature in the book?

Augustus Rose: The book was set in Philadelphia out of necessity — so much of The Readymade Thief involves the work of Marcel Duchamp, and his major works are permanently housed in the Philadelphia Museum of Art. I’d never actually been to the city until I made a special trip there for research, but I fell in love with it immediately. Certain cities just resonate with you immediately, and Philly was like that for me.

I knew urbex was going to play a role in the book but didn’t do any urban exploration on that trip per se. I did drive around looking for and taking pictures of the kinds of sites I thought would be good urbex destinations — old factories, derelict hotels, and a beautiful, old, decaying ocean liner — and I did tour the old and long-defunct Eastern State Penitentiary, which features in the book. There’s also the old Fairmount Water Works, which is open to the public and which I used as a model for a defunct waterworks site in the book.

Some parts of Philly were featured in the book because that’s where the plot took them (for instance, the area around the museum and some of the surrounding suburbs, where Lee spends so much time hiding out in the homes of vacationing families). Otherwise, I just drove around the city a lot, taking pictures and notes, and imagining my characters moving through the various spaces. Philadelphia is a vibrant, bustling city, but in the novel it feels gutted and near-empty, its people ghosting along the edges. In my own tour of the city I gravitated toward spaces that reflected this version. For anyone interested, I posted photos of some of the places that featured in the novel on my Instagram feed (@rrosedelay).

JK: I loved reading about the Société Anonyme. How did you come to create such an interesting and devious secret society? Was there anything about the society you were not able to include in the book but would have liked to explore? 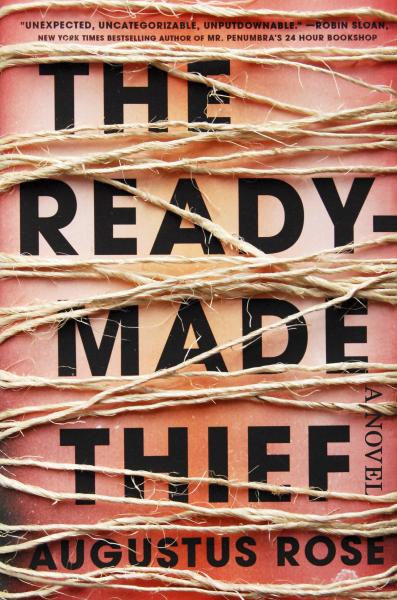 AR: I’ve always been interested in people and groups with benign, even righteous, ideals and causes, who slowly transgress toward a dark line of no return. Where their egos or goals so blind them to their actions that their aims end up occluding all else. So I imagined the Société Anonyme as a group that was really enthusiastic about a specific period (the early 20th century), a specific culture (avant-garde art), and a specific artist (Duchamp) that they genuinely wanted to celebrate in every way they could. I see them as starting out not unlike your typical period re-enactors (Civil War, Renaissance, what have you) but then moving in a scarily obsessive, very dark direction. The fact that they are so consumed with the work of Duchamp feeds into this well, because Duchamp is an artist whose work is all a self-referential and interconnected puzzle; it’s layered and complex and open to so many varying interpretations you can connect the dots in almost any way you wish and come to a solution. But undercutting all of this are Duchamp’s own words: “There is no solution, because there is no problem.”

There’s a lot of backstory and history to the S.A. that didn’t make it into the book that I wrote in summary form for myself but never explored in depth on the page. Because the book is all from Lee’s perspective we never get any close, insider views of the goings-on within the group. That said, I wouldn’t mind exploring the group and its evolution from more of an insider perspective. Especially their early fun, prankish period, before they all turned to the dark side.

JK: Hand-in-hand with the Société Anonyme is the Subnet. How did you conceive of such an entity, and have you had any experience exploring that side of the Internet?

AR: I conceived of the Subnet as a space within the anonymous Darknet, where (carefully vetted) members can meet online to trade in information and goods. As I was researching the book, I did create a Silk Road account and bought some Bitcoin, just to see what it felt like. One of the things that stood out most was how self-regulated it was. For instance, there’s no government agency that’s going to come to your aid because the pure MDMA you paid for on Silk Road turned out to be a bag of some dude’s collected dandruff, but anyone who tries to pull that off will be quickly expunged from the system through negative feedback. In a way, it’s a kind of underground market-driven, libertarian utopia, and that’s akin to my vision of the Subnet (though the Subnet is less commercial, more cultural). The sad truth is that online anonymity seems to breed less self-regulation and more alt-right trolling, which is really pretty awful and not fun at all.

JK: As I read The Readymade Thief, I looked up Duchamp’s artwork like crazy. Where did this love for Duchamp come from? Was the art the inspiration for the novel?

AR: If I’m upping the Google counts for “Marcel Duchamp” searches, then I feel my job is done. I’m half joking, but I’m also really proud of the fact that I’ve managed to convey to the uninitiated just how obsession-worthy an artist Duchamp is. Like a lot of young, arty types, in high school and college I was really taken with Dada and Surrealism and by all the surrounding characters who represented the avant-garde around the turn of the century. And Duchamp was among that mix. But whereas I eventually grew bored with the Surrealists and Dada began to feel a little dusty, Duchamp (who refused to associate himself with any movement) only grew more interesting to me, and his art became like one big series of interlocking puzzles to try to solve. He was always at the center of the answer, but so was the viewer, which is why there are so many “valid” interpretations of his work. Duchamp was hard to pin down as a man, never very forthcoming about himself or his art, and that just added more layers to sift through.

I’d been looking for ways to write around Duchamp for a while, and had aborted a few attempts that used him as a character. They just weren’t working. Then I hit upon the idea to focus more on his art, and eventually came up with a one of those “What if?” questions that novelists sometimes use as a catalyst. In this case: “What if Duchamp had left behind a secret last work, and what if within his entire body of previous work there were encrypted clues to unlock an answer hidden within that final work? What would the question be?”

Also, another question that inevitably came up: “What would that final work look like?” This question confounded me through almost the whole novel — how does one conceive of a final work of art that one of the greatest artists of all time (IMHO) could have come up with? When I finally hit upon the answer it was one of those “Of course!” moments — so obvious that it had been staring me in the face the whole time.

JK: Is this it for Lee’s world? Do you have any follow-up ideas to continue in this amazing world you have conjured up for us?

AR: Honestly, I don’t know the answer to that. I never wrote the book with a sequel in mind, but I haven’t closed the door on it, either. If she knocks again, I’ll answer it and see what she has to say.

Find out more about the author at augustusrose.me.