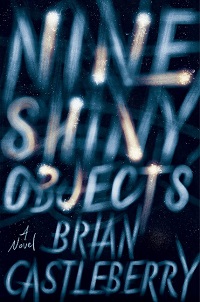 Brian Castleberry is the author of Nine Shiny Objects, a Summer/Fall 2020 Indies Introduce adult debut and a July 2020 Indie Next List pick.

“This debut novel is a puzzle worth working out — don’t give up!” said Indies Introduce panelist Kappy Kling of HearthFire Books and Treats in Evergreen, Colorado. “Castleberry cleverly entwines nine characters over 50 years — a tribute to America as we struggle to ‘become enlightened’ while at the same time understand those who reject new ideas.”

Castleberry grew up in Oklahoma. He is currently a professor of English and teaches creative writing and literature at the College of William & Mary in Williamsburg, Virginia. Here, Kling asks the author about the “puzzle” that is his debut book.

Kappy Kling: Nine Shiny Objects is an exceptional puzzle that weaves together diverse but connected characters over the course of 50 years at five-year intervals. As an author, how did you go about piecing together these complex characters and unique situations? What was your inspiration? 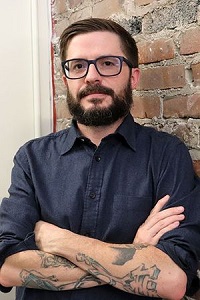 Brian Castleberry: My initial inspiration was to try to understand how we had gotten to now, or rather, to the outcome of the 2016 election. I started thinking of a kind of counter-history that could piece together how the progress we like to imagine defining the country over that period (1947–1987) was always being resisted, and often times turned back. I knew that to make any sense of what I was thinking about would take a lot of time and need a lot of characters. I had this title from a former project that had been left unfinished, and I got to thinking about books I like by Egan, Orange, Morrison, Erdrich, and others (Dickens included). From there it was an easy leap to making nine chapters chronicle the story over time, and to make it easier for myself and the reader, a set interval from around the end of WWII to the waning years of Reagan. The challenge then was to make each chapter feel like a stand-alone story, with a character who feels like a whole individual, even though we only see each of them for a day or two out of their lives. That was the challenge but it was also fun, because it meant discovering each of them, figuring out how they fit into the wider background story, and bringing as much as I could to these individuals taking turn in the foreground. I want something that readers can participate in, something that can come into focus as they read and explore the characters.

KK: With this great cast of diverse characters, do you relate to one more than the others? And if so, what connects you to them?

BC: I grew up in a small town in Oklahoma. In the late ’80s a mall was built in the next town over, and at its center — as far as I was concerned — was this dark arcade where I would occasionally run into people I knew from school or others of my age from nearby towns. I feel like in my pre-teen imagination the place was a kind of salon for dorks like me. Of course, I’d only have 15 or 20 minutes to roam around wasting quarters while my mom was looking at shoes or something. But it’s buried deep in there, and through that memory I discovered the character of Debbie, who is much cooler than I ever was, and much tougher. By accident I landed on Waterbury as a setting for her section — a pretty town regionally nearby New York City. When I went searching on the interwebs for imagery from early-’80s arcades, I immediately ran into a video of Crazy Eight arcade in — get this — Waterbury. The next video YouTube played — another moment of kismet — was a guided tour of the bunkers, which reminded me of the sort of places I’d hang out at in high school in order to feel like I was in a grunge band. Anyway, I feel something close with her, and really with all the characters. As I discover a character, I’m always searching for that part of me that we share, usually something more internal than setting details, etc. That’s my way in, to move out from there and discover what isn’t me and to still feel grounded and stay honest.

KK: The book is in many ways an anthology of America during the last half decade. Nine Shiny Objects brings together the idealism of a world where everyone is accepted and respected, and the forces that violently oppose that thought. In the end, one might ask, “Was it all for nothing?” How do you feel about that conclusion?

BC: That’s exactly right, and the idealism I aimed for here was the simplest and most straightforward I could think of — maybe even elementary. People want the chance to live equally, to be seen and understood for who they are, and they want to work and live with others on equal terms. It’s really that simple. To this day we’ve got people upset about who’s using which bathroom because they refuse to see all people as fellow human beings who need the same dignity we all do; people twist themselves into knots to try to make the simple phrase “Black lives matter” into something that offends them. But that’s the American story and it goes back to the founding and before. Part of how I was thinking as I started writing was that, yes, some of the sense is that it was “all for nothing,” or at least that the struggle isn’t over. And part of that has to do with how the over-arching plot about idealism twists in a different direction around the middle toward a kind of idealism that’s been co-opted by selfishness in that hedonistic second “cult” in the warehouse, centered on Max Felt. As I mentioned before, I kind of think of the book as having a background plot and several foreground plots. My hope is that in each of these foregrounded plots, the reader is able to see the humanity in every character, and that this gives rise to hope, to a willingness to believe again in progress.

KK: One terrible night, a catalytic event occurs that shapes the characters and their thoughts for the remainder of their lives. In fact, the forces of “evil” are prevalent throughout the book. I found this unique and satisfying. Are there other pieces of literature that inspired you in writing this epic anthology?

BC: The Bible, for sure. I’m not going to lie. Early on I started to see the character of Penrod, as people in the book call him, as a Satan figure, always lurking, popping up in moments of violence and reaction, leading us to the final section where things begin to be understood. But he’s also a kind of Cain figure, bent a little out of his original shape. I wanted him to be outsized in his evil, but also petty — the impetus of his monstrousness being personal grievance. And even apart from him, sort of like that simplified set of ideals we talked about before, I wanted the sense of a looming negative force to be everywhere, in each of the characters’ lives. The characters themselves are not at all perfect, neither perfectly good nor perfectly bad. Here I’m thinking of the racist housewife Joan Halford, or the out-for-himself Skip Michaels, or Stanley West, who is finding himself and coming to terms with all his mistakes. I’d say my other chief influence was a very different couple of books that are very important to me. The first is Morrison’s Sula, which explores and complicates the perceived “evil” of the title character. I returned to that book several times as I wrote, along with Ellison’s Invisible Man, where our character keeps plowing forward in life, trying to find his way, and is met with these resistant forces of racism at every step. He’s a towering figure to any writer from Oklahoma. The approach to voice and character you see in his friend Bellow’s novels is always an influence on me as well.

KK: Nine Shiny Objects is not a mindless read — it is complex, requires a great deal of attention to detail, and nothing is tied up in a bow — which is one of the reasons I love it so much. What was the genesis for this novel? And is there any counsel you can give to your readers as they embark on this treasure?

BC: I guess the genesis is trying to understand America, as big and dumb as that sounds now that I’m writing it down. But it really was my goal — not that I think I fully understand it yet. As for counsel for readers, I hope they fall into each chapter and get absorbed in the individual characters. I feel like the wider story that connects them all will come into focus. And they are connected. Many of them look back at similar events from different angles, which should help a reader see everything clearly — although some things are left murky or left with some mystery to them. That’s how we live, after all. We never have all the answers. My hope is that readers find something true in each of these characters and participate with me in making meaning out of the bigger-picture story that populates the background.

Find out more about the author at briangcastleberry.com.