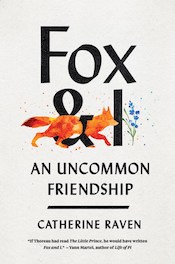 Catherine Raven is the debut author of Fox & I, a Summer/Fall 2021 Indies Introduce adult selection and a July Indie Next List pick.

“Read this book for the story of Fox, stay for the story of the author and how we all are nature. An examination of our relationships with other animals, plants, each other, and the world, Fox & I is a beautifully-written, thoughtful blend of memoir and nature writing that will inform and inspire and make you feel,” said Ariana Paliobagis, the owner of Country Bookshelf in Bozeman, Montana, who served on the bookseller panel that selected Raven’s book for Indies Introduce.

Raven is a former National Park Ranger at Glacier, Mount Rainier, North Cascades, Voyagers, and Yellowstone National Parks. She earned her PhD in biology from Montana State University and is currently an assistant program director and professor at South University in Savannah, Georgia.

Here, Paliobagis and Raven discuss how the author found her memoir voice to tell the story of her friendship with Fox.

Ariana Paliobagis: Fox & I starts with the acknowledgement that foxes live short lives, so the reader always has an anticipation of an ending, and Fox’s life is just a short part of your life. How did this affect how you approached writing and structuring this book? 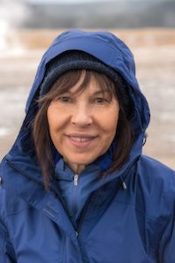 Catherine Raven: When I decided to write Fox’s story, we were still seeing each other every day. Because the book was meant to be about him, not me, the original structure was chronologic, and Fox was in every chapter.

I intended to write a true story about a fox who changed my views on anthropomorphism, became my first real friend, and inspired me to think more like an animal.

A published writer explained to me that Fox and I was not simply a true story, it was a memoir, as much about me as about him. I very much respected this writer (or I wouldn’t have asked her opinion), so I set out to turn my true story into a memoir. I changed the structure to include scenes that resonated with my own life experiences.

Fox altered my life in important ways. He is responsible for my choice to live in the country and to seek a purpose-driven life. In order to honor Fox, I had to share enough of my own story so that readers could see how greatly he influenced my life.

AP: As someone who has done lots of scientific and academic writing, how did you find your memoir voice?

CR: I do have two voices; one is for scientific communication. I did not use that voice in my memoir. Two jobs helped develop my memoir voice: guiding and teaching undergraduates.

I’ve been guiding and instructing field classes in Yellowstone National Park for 20 years and I work hard to avoid jargon and “science speak.” Instead, I use my natural voice, one that is like the voice in the memoir.

AP: Other than Antoine de Saint-Exupery, Herman Melville, and Mary Shelley, who you reference often, are there other writers who influenced you?

CR: Several memoirs inspired me. Imagination runs wild in Maxine Hong Kingston’s Woman Warrior, a super creative memoir about living simultaneously in two different worlds. This was the first memoir that resonated with me after Fox died, reminding me that I, too, was living in two worlds, one with Fox and one when I entered the “real world” of serious, professionals, hawk-eyed on their lookout for violators of the anthropomorphism taboo. In a voice that blends hope and horror, Kingston brought me inside the dreams and struggles of a girl-child in a Chinese-American family.

In A Long Way Gone, Ishmael Beah of Sierra Leone, like Kingston, shows me a world that I knew nothing about, in the same way that I assumed science and biology would be a new world to the readers of Fox and I. Beah’s is the voice of innocence among almost unbelievable terror. I believe his story because his writing is clear enough to highlight his honesty and earnestness. Beah has more right to preach, rant, and rage about an immense humanitarian crisis than anyone in the world. He doesn’t. So, I saw how to address important issues without writing in an opinionated, editorial tone. Importantly, before I found Beah’s memoir, I thought all memoirs were written by professional writers looking for their next topic. Like me, Beah experienced something so profound that he became a writer in order to tell the story.

In Heartbreaking Work of Staggering Genius, a voice very different from mine, I found a memoir with a creative structure that inspired me to finally start Fox and I. Reading Dave Eggers’ memoir, I realized there are no limits on structure if the writer is sincere and the story is well-told. He moves seamlessly in the first, second, and third person voices. This book freed me from the fear of writing a tightly structured book, which had to follow writerly rules that I had not learned.

I enjoy third person. Readers will notice this in the sections I wrote from Fox’s point of view. My favorite third person novels are so excellent, I sometimes pick one up and read a chapter chosen at random. I strongly recommend everyone reads Hilary Mantel’s trilogy (Wolf Hall, Bring up the Bodies, The Mirror and the Light), Anthony Doerr’s All the Light we Cannot See, and Eleanor Catton’s The Luminaries. But you’ll need to avoid these spectacularly entertaining books if you have an ego. I can’t tell you how many times I stopped, mid-paragraph to announce out loud, “I will never, ever write this well.”

AP: You write eloquently, passionately, and forcefully about how humans aren’t just part of nature, we are also nature, we are also animals. Can you talk a bit about why this philosophical distinction is so important? What changes once we realize we are not separate from nature?

CR: On a practical level, I worry about folks experiencing loneliness. I want them to realize that Nature isn’t a mother, it’s a community, and that they are inherently part of this community. It’s their birthright. When they realize they are part of this community, it’s unimaginable to me that they could be lonely. Humans might not have a welcome place for everyone at any given time, but the community I call Nature will always have a spot somewhere. I have found comfort with a slug on a forest floor. Would you turn your nose at a housefly? If not for that one dancing fly, Fox and I may never have connected when we did.

On a philosophical level, I think it’s helpful to reassess our common understanding of anthropomorphism. The term assumes that certain personality — or non-physical — traits are the exclusive domain of Homo sapiens. For example, an appreciation of beauty, or the ability to discern something that is visually pleasing. What happens if we believe that animals are more like us than we once imagined? Will we treat them better? I wish I were that naïve. But let’s face it, sometimes our own parents treat us worse than complete strangers; closeness doesn’t translate to kindness.

But I am optimistic enough to believe that some people will treat some animals better, and others will at least start thinking about it.

As a community, I find that people are anthropomorphobic. And so, we have created an artificial divide between humans and non-human animals. We fear the image of animals acting like people, but more so, and more concerning, we fear the image of people acting like animals. A small change leads to many possibilities. For example, what would you do differently, if, like other animals, you thought about your optimal habitat instead of just picking a career and following it to wherever?

AP: If you could have more time with Fox, how would you spend it?

CR: When you finish the book, you’ll know that I did a terrible thing to Fox. You’ll understand that I wasn’t the friend I should have been. I would have liked more time to make it up to him and more time to experience the responsibilities of friendship.