De’Shawn Charles Winslow is the author of In West Mills (Bloomsbury), a Summer/Fall 2019 Indies Introduce adult debut and a June 2019 Indie Next List pick. 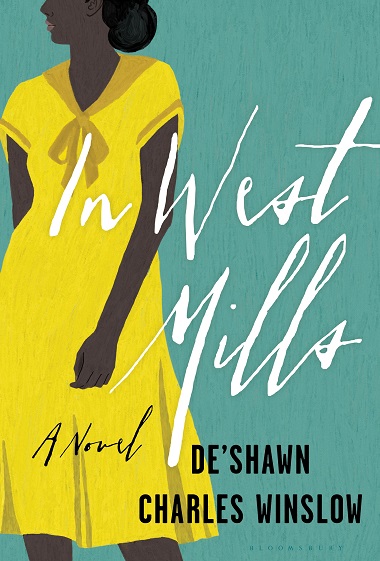 Winslow was born and raised in Elizabeth City, North Carolina, and in 2003 moved to Brooklyn, New York; he nows lives in East Harlem. He is a 2017 graduate of the Iowa Writers’ Workshop and holds a BFA in creative writing and a master’s degree in English literature from Brooklyn College, and has received scholarships from the Napa Valley Writers’ Conference and the Bread Loaf Writers’ Conference.

According to Erika VanDam of RoscoeBooks in Chicago, Illinois, who was on thee Indies Introduce panel that selected In West Mills, Winslow “create[s] a terrific group of characters and put[s] together a wonderful story of lifelong friendship — and the secrets and choices that go along with that territory.”

Said VanDam, “It’s 1941 in West Mills, a small and mostly African-American North Carolina town, and Azalea ‘Knot’ Centre is totally uninterested in conforming to anyone’s expectations of her. She’s fierce, intelligent, and confident in her love of booze and sex. And when her parents cast her out, she finds her family in a handful of close friends and neighbors...all of whom have problems of their own, of course.”

Erika VanDam: Knot Centre is a one-of-a-kind woman and a character unlike any other. Where did the idea for Knot’s character come from?

De’Shawn Charles Winslow: As a child, I knew a woman whose nickname was “Knot.” She was my great-uncle’s girlfriend. She struggled with alcoholism, but she was the kindest, most fascinating person to me. She passed away when I was 10, so I knew very little about her, but I’ve never forgotten her. I was always excited to see Knot! I remember her being a bit of an entertainer, always making people laugh.

EV: Is there anything in your personal experience that figured prominently or served as inspiration for you to write In West Mills?

DCW: Not so much. I’ve always had an obsession with deceased people — people in my family or connected to my family — who I wanted to know more about. But I do see bits of myself in Knot and Otis Lee. I actually worked hard to not make this novel about me.

EV: Family — both the family we’re born to and the family we find among friends — appears to be a strong theme throughout the story. Were there any relationships, familial or otherwise, that felt especially challenging to write?

EV: Are there any particular books or authors that inspired you while writing In West Mills?

DCW: I love the works of Zora Neale Hurston, Toni Morrison, Alice Walker, and Edward P. Jones. I certainly thought of them while writing the book, and they’ll probably inspire most of what I’ll write.

EV: In West Mills takes place over a period of nearly 50 years, and in that time, some aspects of life change a lot, while others don’t. What did you hope to show by having the story occur over such a long period of time?

DCW: I wanted readers to see that some characters (people) change a lot, and some change very, very little. I also wanted to show that some communities — for better or worse — don’t let the outside world affect the way they live. Some places hold tight to their culture, regardless of technology, capitalism, and so forth.

Find out more about the author at deshawncharleswinslow.com.