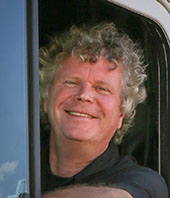 Finn Murphy is the author of The Long Haul, a Summer/Fall 2017 Indies Introduce debut title and a June 2017 Indie Next List pick.

Murphy started working as a long-haul trucker in 1980 and now lives in Colorado when not on the road in his 18-wheeler, Cassidy. Jason Kennedy of Boswell Book Company in Milwaukee, Wisconsin, who served on the Indies Introduce panel that selected The Long Haul, said Murphy’s memoir about trucking is “brilliant.”

“Finn Murphy has moved his customers from one place to another for more than 20 years, packing, stacking, driving, and unpacking for each move he does. Long-haul movers know a lot about their customers’ private lives from the clues they leave around to be packed up,” said Kennedy. “Along the way, Finn makes some very astute observations about America’s heartland and the evolving workforce of today. Completely engrossing and worth the read.”

Here, Kennedy and Murphy discuss the experiences that provided material for the author’s memoir.

Jason Kennedy: The Long Haul is an eye-opening look at a vocation that I never thought could be so fascinating. The world of truckers is so complex, and you wrote about some of your blunders early on. Is there one in particular that almost ended your career? 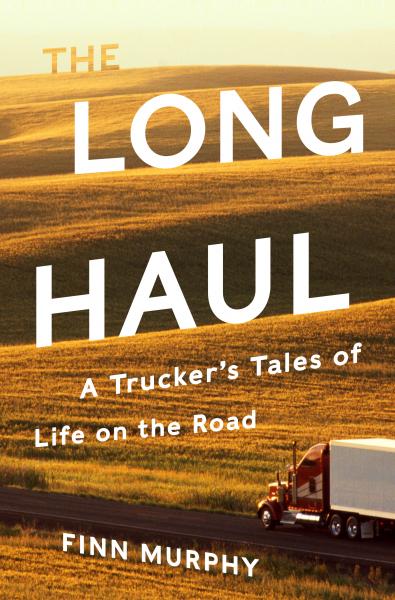 Finn Murphy: A running theme among readers of advance copies is that, like you, The Long Haul is a book they might not normally have picked up. Then they do, and they enjoy the ride. That’s very gratifying.

An advantage of being a long-haul driver is that I work alone. I am what John McPhee called “the admiral of my fleet of one.” That means most of my really heinous mistakes weren’t/aren’t observed by my superiors. I was summoned to the North American Van Lines mover school early on in order to improve my quality score. They called the class “Cargo Handling,” and it was a week-long intensive taught by retired award-winning drivers. I wasn’t given the option to refuse. In a warehouse in Indiana, North American had a two-story frame house mockup set up with all sorts of furniture and stairways with twists and turns. We moved furniture all day under the steely eyed veterans and received correction on how not to ding walls or break things.

JK: I like that you didn’t dress up being a long-haul driver — that you illustrated the good times and the hard ones. When you decided to write about your profession, did you plan to be brutally honest?

FM: I knew I was going to try to give all sides of the life. Frankly, I get a little grouchy with the hagiography of the American myth of “The Road.” There are certainly moments of transcendent joy out there, but they’re rare. A great deal of both trucking and moving is long, hard work.

More troublesome for me was how much of my own transgressions and travesties to include. I finally decided to let it all out, warts and all. I wasn’t a very nice guy in my early years and that comes through in the book. I’m pretty sure I’m a better man now.

JK: Your brutal honesty includes descriptions of all the labor, extreme amounts in some cases, which had me rubbing my sore back. Has your body held up because of the job or in spite of it?

FM: So far, so good. I credit my Irish peasant heritage and not any particular physical regimen on my part. You won’t find any gyms at truck stops and you won’t find any decent food, either. I definitely hire more help these days and leave the gun safes to the younger folks. I carry a lot of “chowder” out to the truck — small, light, goofy stuff like garden tools and toys and laundry hampers. My regular crew in Denver has gone so far as to joke about it. When someone carries out an ironing board or trash can, they call it “a driver’s lap.”

JK: You have some amazing stories to tell. Is there one you wish you could have included but couldn’t?

FM: The manuscript I handed in to W.W. Norton was about twice as long as the book is now. It was masterfully edited by Matt Weiland. I’m surprised and grateful that so many readers find the descriptions of the work and its complexity fascinating. A lot more exposition on the work itself didn’t make it to the final manuscript. Neither my editor nor I were sure how much the work narrative would resonate with readers. Ironically, everyone seems captivated by the work narrative. In the final analysis, I think we got the balance just about right. I like the book a lot.

JK: What’s next on your plate?

FM: The Long Haul is basically in two parts. Part one details my early years in the 1980s and part two is my return to trucking in the 2000s up to the present. I had an entirely different life in between, and that, too, was a rollicking ride. Maybe that’s my next book.

Find out more about the author at finnmurphy.net.