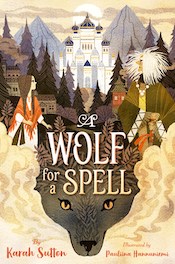 Karah Sutton is the author of A Wolf for a Spell (Knopf Books for Young Readers), a Summer/Fall 2020 Indies Introduce young adult debut selection and a Fall 2020 Kids’ Indie Next List pick.

“Wolves, tsars, and witches…oh my!” said Rebecca Crosswhite of Rediscovered Books in Boise, Idaho, who served on the bookseller panel that selected Sutton’s debut for Indies Introduce. “I loved this fabulous story, with all the different points of view, the wonderful illustrations, and the magical writing. I love the wolf’s point of view and I love everything Baba Yaga! I wanted to live in the forest with these wondrous creatures!”

Sutton was born and raised in Kentucky, and was formerly a bookseller at Joseph-Beth Booksellers. She currently lives in Wellington, New Zealand where — in addition to writing — she works in marketing for the video game industry.

Here, Crosswhite and Sutton discuss the stories and fairytales from the author’s childhood that inspired her debut book.

Rebecca Crosswhite: Why Baba Yaga? How did you get from New Zealand to Russia? What was your inspiration for this story? 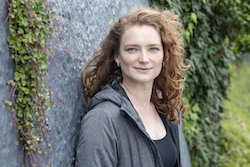 The idea that started everything was, “What if the wolf is the hero of the fairytale?” I went through so many approaches to this — what if a wolf finds out her brother ate Little Red Riding Hood? What if a wolf is similar to the little mermaid and dreams of becoming a human? — but nothing really clicked until I made the connection between the wolf-as-hero concept and the Gray Wolf from the Russian fairytale Ivan Tsarevich, the Firebird, and the Gray Wolf.

My mother shared a book of Russian fairytales with me and I’ve loved them all my life. That’s stayed consistent from my childhood in Kentucky to my adulthood in New Zealand, so I find feelings of peace and consistency and nostalgia from reading them, like catching up with old friends. Once I realized I could connect these two things, my excitement for this story snowballed. From there, it was obvious to include Baba Yaga — she’s such a terrific character and an icon. And she became the glue that bound the story together, because here is this witch who is totally ambiguous, sometimes helping the hero in fairytales but usually threatening to eat them. So you throw together a morally gray witch with a wolf who is navigating whether she’s a hero or a villain, and from there the story really began to come together.

RC: What were some of your favorite fairy tales/fables growing up? Which ones make you think of your childhood?

KS: Among Russian fairytales, my favorites were always Maria Morevna, the Feather of Finist the Falcon, and of course the Firebird and the Gray Wolf story I mentioned earlier. I really love the way Russian fairy tales incorporate animals and how you meet many of the same characters and creatures across different stories. I wish these stories were more widely known, which is one of the things I hope to inspire with my books, even if they aren’t direct retellings of any one tale in particular.

Aside from those, I’ve always had an affinity for Cinderella, probably due to reading and adoring Ella Enchanted when I was nine years old. That book is one I still hold up as my favorite fairytale retelling, and I can see its fingerprints all over A Wolf for a Spell, from the focus on strong heroines to certain laugh-out-loud scenes.

RC: Why did you decide to do an animal point of view? How did you do research for the wolves?

KS: I’ve always loved books that feature animals, and I especially love the cross section between animal stories and fairytales, so this seemed like a natural fit. I love how fairytales can feel like “anything goes,” where a wolf can turn into a witch or a cottage can run around on chicken legs and characters don’t even bat an eye. It was a big challenge, though, to decide on how personified versus “wolfish” I wanted my wolves to be. In extremely early drafts they were much more like fairytale wolves, where they had human characteristics and Zima did things like use a leaf as a napkin when she ate her food. But once I decided this was set in a Russian fairytale world, the wolves became more wolf-like. Their survival in a world where wolves are often the enemy became the focus of their lives, the challenges they faced more deadly. But I also loved how playful real wolves can be. I enjoyed live streams and videos from wolf conservation centers, where you can watch them eat and sleep and play, and you start to understand their body language and the sounds that they make. I am grateful for the role these conservation charities played in helping me research this book, and in helping wolves in the real world.

RC: Which character would you want to do a follow-up story on? Why?

KS: Definitely Veter, one of the other wolves who helps Zima in the story. I love how he approaches challenges with a sense of humor, yet as we get to know him we see how this disguises the vulnerability and heartbreak that he’s felt ever since tragedy struck his pack and desperation led him to scavenge in the human village for food. He was always a character I loved, and I kept trying to find new opportunities to include him in scenes.

KS: There are no wolves in New Zealand! Or snakes, or squirrels, or a lot of other creatures people are very used to in other countries. New Zealand has an incredible ecosystem that evolved almost entirely in isolation from other countries. The only native mammals are bats (so no deer, no rabbits, no mice or rats), and the majority of native animals are birds entirely unique to New Zealand. Sadly, predators introduced when humans/colonists arrived have made many of the birds endangered or even extinct.

One animal I would love to write about is the tuatara, an extremely unique type of reptile that traces back to age of the dinosaurs! It has a third eye on the top of its head, and can live to be 100 years old. They look a lot like large lizards, but apparently are as different from lizards as crocodiles are from birds! They’ve been on earth for more than 200 million years, so I’m sure in that time they’ve gathered a lot of stories they could tell.

RC: Can you tell us about any upcoming projects?

KS: My next book with Knopf plays with depictions of swans in fairytales, such as Hans Christian Andersen’s The Wild Swans and the ballet Swan Lake. I was a ballet dancer until I was 18, so it has been wonderful to revisit one of my favorite stories!

Find out more about the author at karahsutton.com.