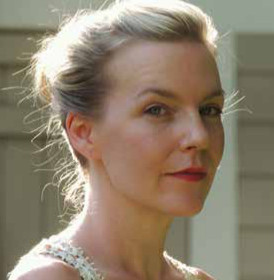 Leslie Parry is the author of Church of Marvels (Ecco), a Spring 2015 Indies Introduce debut novel for adults and a May 2015 Indie Next List pick.

Parry is a graduate of the Iowa Writers’ Workshop and a recent resident at Yaddo and the Kerouac House. Her work has appeared in the The Virginia Quarterly Review, The Missouri Review, The Cincinnati Review, and The PEN/O. Henry Prize Stories, among other publications. She has also received a National Magazine Award nomination and an honorable mention in The Best American Short Stories 2013. She currently lives in Chicago.

“Carnies, sword swallowers, and sisters who allow tigers to comb their hair all make up this wondrous tale whose foundation is the Coney Island circus show The Church of Marvels. I loved all the details of this trying life in New York City in 1895 — the brothels, the opium dens, and just the endless days of trying to survive,” said Annie Philbrick of Bank Square Books in Mystic, Connecticut. “Church of Marvels is in the same realm as The Night Circus, and you will not be disappointed whatsoever with this fabulous work of debut fiction.”

What drew you to write about New York City in the late 19th century? 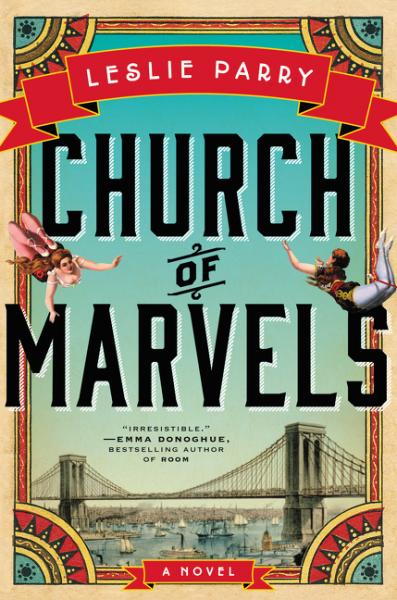 Leslie Parry: Part of it was my own nostalgia for the years I spent in New York. All those little apartments and trembly fire escapes and willful aspidistras! All that takeout food glowing radioactive-orange in the back of the fridge! All those weekend mornings spent happily, aimlessly traversing the streets with a cup of deli coffee! During that time, I often wondered about my own immigrant family. Not long before the Church of Marvels era, the Parrys arrived in Manhattan from a tiny, rural town in Wales. How would they have experienced such a place, I wondered — especially on the cusp of a new century, when the streets were so roiling and dense? They spoke little or no English at first. They found work as dressmakers, errand boys, elevator operators — but they quietly yearned for more. So the initial inkling, I suppose, was that restless desire to know them, to recreate the world that they lived in. But then the story took off and became another beast entirely.

Gender ambiguity plays a major role in several of your characters’ lives. How did you decide to incorporate that into your storyline?

LP: It wasn’t planned, or even a conscious decision, really. I just followed the characters through their own unique territories. I enjoyed discovering their secrets and desires, their closely held beliefs, that deep sense of personhood. Soon it became a natural element of the story. It’s something I think a lot about anyway, I suppose: how gender is learned, how behaviors are coded, how we express and defend our strengths and our sensitivities. I’ve always chafed against certain roles, even as a very young child. I was always looking for a way to understand my own duality — the masculine and feminine sides of myself, which are equally strong and natural and empowering and symbiotic, but at times have been so, so hard to categorize or explain. The sense of doubling, of two spirits, is important to me.

Your debut touches on a number of social issues of the late 19th century — many of which are still applicable today. Was this a product of time and place, or are these issues something you felt needed to be discussed?

LP: Again, this wasn’t a purposeful decision, but I do think it’s important to remember that the issues we discuss so heatedly today (discrimination, violence, class prejudice, public health, women’s health, sexuality, etc.) are not new phenomena or trends of the modern age. They’ve existed, in different forms, for centuries. Especially now, in the era of never-ending newsfeeds — where information is disseminated and consumed, then just as quickly forgotten — history (perspective) is essential and relevant. Despite our many advancements, human behavior, human needs — the human heart — is still very much (beautifully, tragically) the same.

One of the narrators in Church of Marvels, as we learn in the opening pages, has lost her tongue, mirroring similar stories from history, such as that of Philomela. Did you have these stories in mind when developing this element of the story?

LP: When I began writing, I had only a vague memory of those kinds of stories. My father, an actor-turned-English-teacher, had a library full of mythology, folklore, and Shakespeare. As a kid, I would sneak a book down from the shelf and look — naturally — for the most gruesome section I could find. But it wasn’t until I was an adult, well into the writing of this novel, that I returned to those tales and really began to understand their gravity and implications. The silent woman, the punished woman, the meek and broken ideal — a woman who can’t challenge or threaten authority, who quite literally has no voice of her own — how does one reclaim that narrative? How can a woman’s silence also be a wellspring of great ingenuity and strength? Such precedents made me consider those questions in a new way.

LP: Each bookstore has its own unique character — its own passions and tastes, its own way of celebrating the titles and authors it’s excited about. No matter where I go in the country I can rely on that passion. I know I’m going to discover a book that I never really considered — or even heard about — before. Last time I was at Tattered Cover I picked up a stack of reissued noir; at Seminary Co-op I found experimental poetry; at Skylight I discovered zines and art books. The expertise of each staff member is astounding, and inimitable. For a reader, that’s an extraordinary gift.